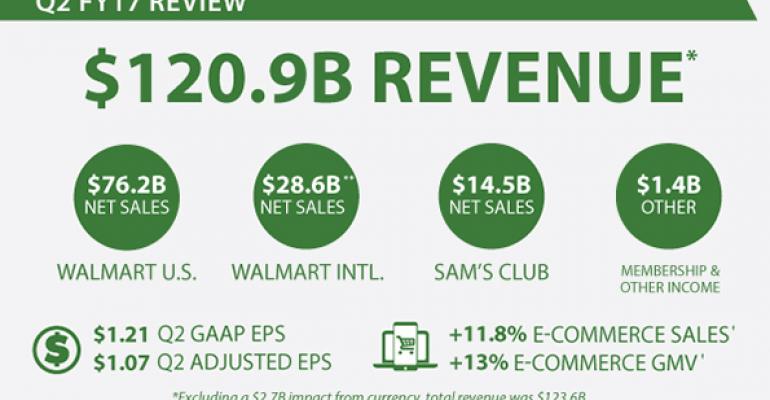 The Bentonville, Ark.-based mass merchant said U.S. stores saw comp gains of 1.6% on a 1.2% increase in store traffic. In May, Walmart said it was anticipating comps for the quarter to increase by about 1%.

"We continue to see steady improvement in the Walmart U.S. business as customers respond favorably to the changes we’re making in our stores and e-commerce offer," Brett Biggs, Walmart's CFO, said in recorded remarks. "We believe a contributing factor to the results is our consistent improvement in customer experience. Customer surveys indicate that we’re making good progress in providing a better shopping experience with cleaner stores, faster checkout and friendlier service."

U.S. gross margin increased 33 basis points in the quarter. Improved margin rates in food and consumables were a contributing factor, officials said. Savings in procurement, lower transportation costs and some improvements in shrink also improved costs, but these were somewhat offset by the implementation of a multi-year strategy of incremental price investments.

Walmart did not provide additional detail of that program.

Despite increased promotional activity by competitors, Walmart Canada's comp sales increased by 1.1%, the division's ninth straight quarter of comp growth. According to Nielsen, Walmart Canada continued to gain market share in food and consumables and health and wellness during the quarter.

Overall Walmart said quarterly revenues increased by 0.5% to $120.9 billion, or by 2.8% at constant currency rates. Adjusted earnings per share of $1.07 topped consensus estimates of $1.02.

"Marc is a passionate merchant and innovative thinker who will definitely add value to our business," McMillon said. "I look forward to working with him."