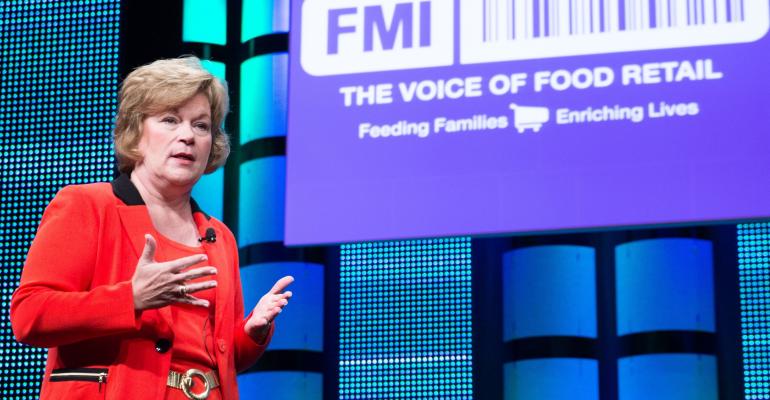 ORLANDO, Fla. — Supermarkets used to believe that they were the center of the universe around which their customers revolved, but in today’s world that is no longer the case, said Leslie G. Sarasin, president and chief executive officer, Food Marketing Institute.

Addressing the audience at FMI’s 2013 Future Connect conference here on Tuesday, Sarasin cited research that details the changes under way in the marketplace, including more and more competition from nontraditional channels and consumers who are increasingly guided through life by their smartphones. This has led to a Copernican Revolution of food retailing, she explained.

“Where we once tried to get consumers in our stores, we now must realize our customers carry our stores, and the stores of our competitors, in their hands everywhere they go,” she said, citing research showing that 68% of U.S.consumers will carry smartphones by 2017, up from 49% now.

“The Copernican Revolution of food retailing requires that we reverse our food universe. Shoppers don’t revolve around our stores. Our stores revolve around our shoppers,” Sarasin said. “So we have to undo decades of thinking about how to get shoppers into our stores, and start thinking about how to get our stores into the lives and hands of our customers. Even though we have been hinting at this for years, and talking about the growing empowerment of our consumers, the day of reckoning has arrived.”

She noted that retailers who have embraced this evolution have begun implementing things like mobile checkout, online sales fliers and online nutrition information.

“This is the kind of effort that is needed to cut through the virtual clutter and gracefully make the store part of the shopper’s experience,” Sarasin said.

She drew on data from a new FMI report called “Food Retailing 2013: Tomorrow’s Trends Delivered Today,” with data from research partners Booz & Co., Catalina, Nielsen and Crossmark. The research is slated to be further discussed in a panel discussion on May 1, followed by a series of webinars addressing the implications of the research for merchandising and innovation, market dynamics, in-store technology and marketing.

Other trends Sarasin addressed in the presentation included the emergence of online shopping, with what she described as a “conservative estimate” that online channels in 10 years would capture 11% of supermarket in-store sales, 35% of which would be perishable product. Retailers need to embrace online shopping and develop strategies that cater to consumers’ mix of needs for service through both virtual and in-store shopping, she said.

Demographic changes are also having an impact, with the growth in minority populations expected to continue.

As an example, she cited the differences in the ways various ethnic groups express value-seeking behaviors. African Americans tend to seek the lowest overall cost, Caucasians tend to accept living with less, and Hispanic shoppers are more likely to compare prices across stores.

“In a consumer-centric universe, we should know what they value, and how their age, their gender, and their ethnicity share their choices, preferences and habits, not just as a group, but as individuals,” she said.

In welcoming remarks, David Dillon, chairman and CEO of Kroger Co., and chairman of this year's Future Connect, called on attendees to focus on continually improving.

"The bar is always being raised," he said.

Dillon also said attendees who were selected by their supervisors to attend Future Connect should think about how they can use their learnings to benefit their companies.

"You were hand-picked to be here," he said. "What will you do in return?"