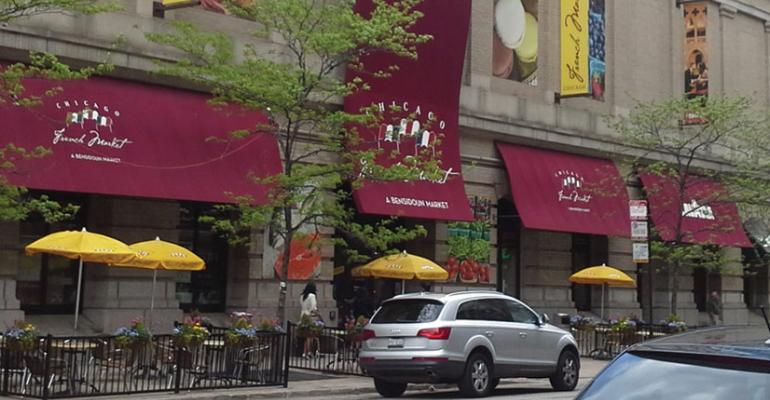 10 Chicago food retailers to visit while at FMI Connect

The Chicago food retail industry has been quickly evolving. In 2013, the area lost Dominick’s, a supermarket chain of long standing, but taking its place are some new players, or some familiar ones that are taking surprising turns.

Following are 10 retailers that we recommended you visit during your stay in the Windy City. They were chosen because they offer something unique to the industry and their customers.

Several are within walking distance from Loop hotels, while others may require a short cab ride or trip on the El. All are within 30 minutes of McCormick Place and well worth taking the time to see. 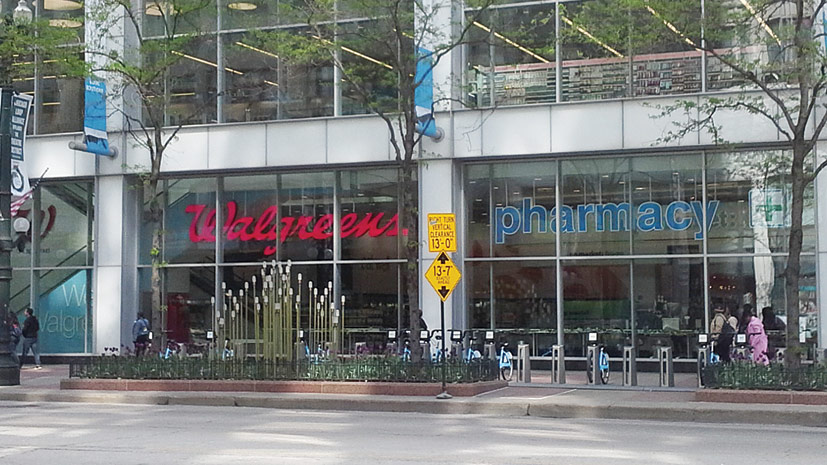 Deerfield, Ill.-based Walgreens has been expanding its reputation as a food retailer, and its flagship State Street store is the result.

The ground floor of this two-story site is dedicated almost exclusively to food, a lot of it not the type you’d expect at a “drug store.” Along with the customary snacks, this Walgreens offers selections that rival those of a specialty food store. At the large food island near the main entrance, there are grab-and-go salads and sandwiches, soft-serve frozen yogurt and a juice bar, right along with sushi prepared daily by an in-house sushi chef.

In the liquor section, Walgreens offers craft beers and wines, all the way up to a $2,400 bottle of Remy Martin Louis XIII cognac.

Approximately 30 local vendors have gathered under one roof at the European-inspired Chicago French Market. It was co-developed by the Bensidoun family, the largest market operator in Paris, according to the market’s website, with the goal of supporting local farmers and artisans.

The Chicago French Market is located in a commuter train station, giving suburbanites and city-dwellers access to fresh organic produce, grass-fed beef, hand-made French and Polish pastries, and artisan cheeses. Anyone wishing to have a bite while visiting the market can pick from Belgium frites, Montreal-style pastrami sandwiches and the Midwest’s take on the lobster roll. 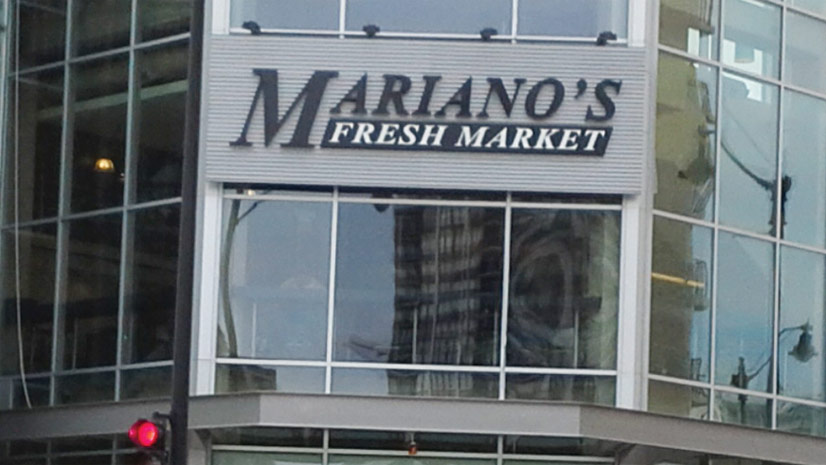 Milwaukee-based retailer Mariano’s has been coming into Chicago like gangbusters. It has 27 stores in the city and suburbs with more to come; parent company Roundy’s purchased 11 of the former Dominick’s sites.

After greeting customers with a wine/coffee/gelato bar at the entrance, an escalator leads up to the main food floor. According to the store’s website, it carries more than 700 produce items, much of which comes from local farmers, as well as in-house made fresh sausages. To please the sweet tooth, this Mariano’s has homemade fudge, and hand-dipped caramel apples and strawberries. Ready-to-eat options include sandwiches like New Orleans-style muffaletta, an oyster bar and a sushi bar.

Mariano’s is always crowded, so in addition to regular checkout lanes, the retailer has peppered freestanding express lanes throughout the store. An IKEA-style cart escalator transports customers’ purchases up to third-level parking.

Jewel-Osco managed to out-survive rival Dominick’s to become the face of the mid-market retailer in Chicago. However, facing stiff competition from newcomers in the field, it has been going through a phase of updating and reinventing.

This can be seen in Marketplace by Jewel Osco on State and Ohio streets. There has been a Jewel store on the site for 11 years, and a remodeling was completed in October 2013. The store has the look of a specialty food store rather than the large mega-markets of its suburban sites. The entrance was converted from a side entrance to one on the corner, and the floors have a wood grain look.

Additions to the store were an expanded produce selection, a new self-service food bar, a juice bar and freshly made guacamole. “The new format … provides a comfortable shopping experience with a focus on delivering premium customer service,” said a statement from Jewel-Osco released at the time of the grand reopening. 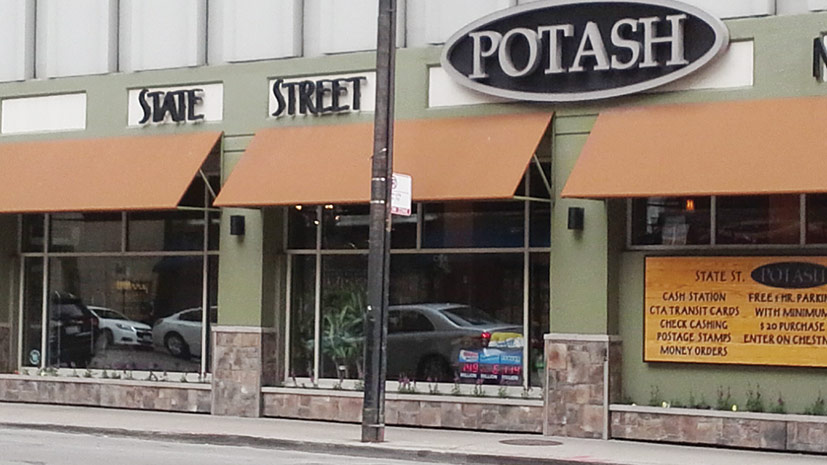 After the opulence of Mariano’s, it’s nice to get back to basics with a retailer like Potash Market. The Potash family started this three-store independent in 1950, and they still operate it today.

The Potash motto is “Feast on Friendly.” The State Street store has the cozy feel of a neighborhood market where people still walk to go to the grocery store, said Art Potash, one of the owners.

The market is small, but it still carries more than 20,000 products, said Potash.

Eataly Chicago has been called an “Italian food theme park.” At 63,000 square feet, it is the largest of the Mario Batali/Joe Bastianich/Lidia Bastianich enterprises in the U.S.

A few blocks off Michigan Avenue, the site is a gathering spot for locals, people who work in the Loop and visitors. Weeknights usually find Eataly filled with people sipping wine and eating at one of its 22 restaurants. One of the most popular eating spots is the Nutella bar where the creamy spread is served on bread, in crepes and in between cookies.

Eataly is also home to high-quality products produced locally and in Italia. Onsite artisans make fresh pasta, mozzarella, bakery goods and pastries for anyone to take home for their families to enjoy.

Before there was Whole Foods and Mariano’s, Chicago had Treasure Island. This seven-store, family-owned retailer has been providing Chicagoans with specialty food since 1963. Julia Child called Treasure Island “the most European supermarket in America,” according to the retailer’s website.

The Elm Street Treasure Island has stainless steel dispensers of its own brand of artisan vinegars and a bar for mix-your-own trail mix. The sandwiches are made to order with fresh ingredients like ham, Brie and arugula on a mini-baguette, and the to-go Neapolitan pizzas have hand-made crusts. The staff is super friendly.

A few blocks north of Treasure Island is Plum Market, the only Illinois location for the Michigan-based retailer.

In most supermarkets, the first section you see upon entering is produce; at Plum Market it’s the wines and spirits. Many of the wine selections carry “Plum Picks,” small signs that offer an opinion given by a member of the wine staff. The store also has a wine cellar and tasting room, and there are Thursday night wine tastings with appetizers for $20 per person. The liquors are beautifully merchandised on a large, back-lit display.

The hot-food bar is impressive for its size and for the signs that mark many items for dietary needs such as vegetarian, vegan, gluten-free and dairy-free.

“Location, location, location” is the old realtor adage, and the same could be said for this retailer. This Whole Foods Market could exist no place other than Chicago; the store’s website says it pays homage to “one of the greatest cities on earth.” This is the largest Whole Foods in Chicago and the second largest in the country, said a store employee.

Signs in the produce section point out what is locally grown, but also that Whole Foods feeds the apes at the city’s Lincoln Park Zoo. The hot food bar salutes some of the city’s ethnic communities with German, Polish and Mexican dishes. On tap at the in-store bar is locally made Goose Island Beer.

The retailer also serves hamburgers and hot dogs at “The Riverview Diner,” a tribute to a beloved amusement park that delighted generations of Chicagoans.

It may be the first Chicago Mrs. Green’s, but more are to come. Reports are that the retailer plans six more locations, including a former Fox & Obel in the downtown Streeterville neighborhood.

A sign at the entrance says the store carries “only 100% organic produce,” with 214 varieties on one recent visit. The unique self-serve wine sampling machine frees up associates’ time by allowing customers to choose their samples from preselected bottles.

Video: FMI Connect 'Retail Experience of the Future' to highlight interactivity
May 16, 2014