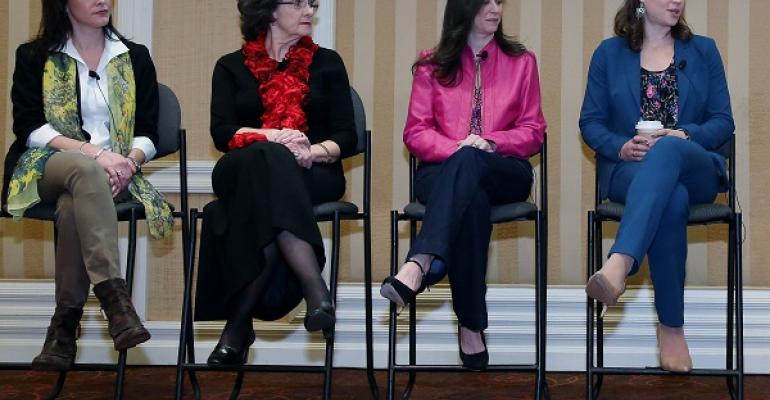 Women in the grocery business have to figure out how to balance work and family more so than men do, a panel of women acknowledged during a workshop session Tuesday at the annual convention of the National Grocers Association in Las Vegas.

"It's hard for a woman to advance in the grocery business and take an opening or closing shift when she's trying to raise a child as a single parent, and that often can hold women back from promotions," Lauren Johnson, COO for Newport Avenue Market, Bend, Ore., said.

According to Lisa Walsh, VP, PepsiCo Sales, "It took me a long time to learn to put my needs first. Early on, I tended to sacrifice personal time quite a bit and be an overachiever. But after my first child was born, I thought people would notice that my priorities were split, but no one did.

"So at the end of the day, if you get your work done, that's all that's really important.  But it's up to each person to prioritize. Now I really try to unplug — to not lose the human connection."

Lorelei Mottese, director of government relations for Wakefern Food Corp., Keasbey, N.J., said her first "aha" moment came when she let a professional obligation allow her to miss a significant event in her child's life. "There comes a point where you have to say family comes first, and now I focus on my family on weekends and don't do work."

For Emily Coborn, director of Topco program management at Coborn's, St. Cloud, Minn., "It's a constant balancing act, and I'm still not sure if I get it quite right. For example, I feel I need to work out four or five days a week because that makes me more productive; and I need seven-and-a-half to eight hours sleep.  So it's important to establish priorities and acknowledge what you need to achieve the right balance."

The women also expressed the need for more women in the food industry, with Johnson saying a woman's perspective at store level would be very welcome. "For example, not all displays need to be in a straight line, which is how men like to build them. We need to employ more women to take a different approach to the way we merchandise."

According to Coborn, "With so many women shoppers making decisions in the stores, it's important to have the kind of diversity they can bring to a leadership team."