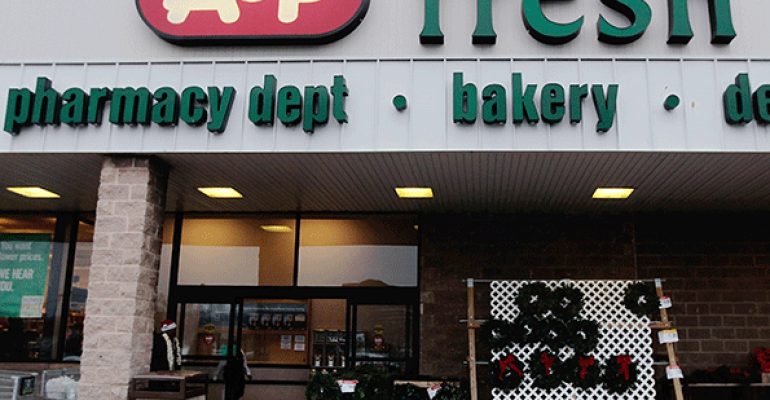 Citing a perilous financial condition and fruitless negotiations with labor unions, A&P has filed emergency motions under section 1113 of the U.S. Bankruptcy Code to unilaterally strike the “bumping” and severance obligations of its collective bargaining agreements with its workers.

The retailer, which said the provisions would interfere with a plan to sell its stores under a Chapter 11 bankruptcy auction, has asked the court to rule on the request next week, and said it would likely file a motion to make permanent modifications later this month in anticipation of auctions for 118 of its 297 stores.

The filing came after A&P and the United Food and Commercial Workers union were unable to reach compromise on modifications to their CBA. The UFCW represents 93% of A&P’s 28,500 employees.

“The debtors believe that they will have the best chance of confirming a chapter 11 plan by achieving consensus with the unions, whose interests are, in many respects, aligned with the debtors’ interests,” A&P said in the motion, filed late Tuesday at U.S. Bankruptcy Court in White Plains, N.Y. “In furtherance of this goal, the debtors developed and presented the Unions with a formal proposal, met on multiple occasions with unions and their advisors (separately and together) to discuss and negotiate the terms of the proposal, and provided access to a data room with backup and information responding to union requests.

“Negotiations to achieve a permanent resolution will be complicated and will no doubt take time,” the filing continued. “Unfortunately, the debtors cannot afford the financial, practical, or operational cost of delay in the interim.”

A&P said its financial position was “precarious,” and reiterated that its only alternative without relief from contract provisions was a Chapter 7 liquidation. “Every day and every dollar spent in chapter 11 is an additional economic hurdle to confirming a chapter 11 plan,” it said.

A statement from the UFCW late Tuesday confirmed the sides were unable to reach compromise, and that it would provide additional information to members shortly.

Although negotiations on a settlement are expected to continue, A&P said Tuesday  the UFCW had yet to offer a counterproposal to the severance and bumping issues.

A&P argued that “bumping” rights — which allow senior employees to take jobs from less-experienced workers in the event of store closures — would complicate A&P’s plan to distribute stores among multiple buyers and would violate conditions under which “stalking horse” bids for its 118 stores were made.

“There simply are no stores that the debtors will own on a go-forward basis to which senior employees can be transferred,” A&P said.

A&P said it requires modifications to severance agreements in anticipation that those payments — required by the CBA when workers are terminated due to store closures — will create priority disputes. The company also intends to argue that at least some of its severance costs are pre-petition claims.

“Regardless of their priority, however, the Bankruptcy Code’s distributional and priority scheme does not require the Debtors to make any payments at all on account of severance during the midst of this proceeding,” A&P said. Its proposed changes would pay an portion of severance costs — reportedly, 25% with a $10 million cap — with the remainder deferred with a claim.