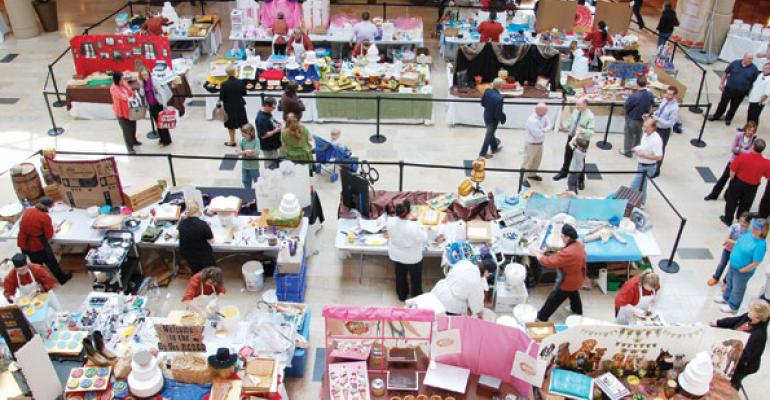 Hy-Vee uses the competition to get the word out about its cake decorating talent to customers, and as an opportunity for designers to learn more about decorating from each other.

“We consider it great advertising for our customers. When they walk through our grocery stores they have no idea of the level of talent that we have in cake design,” said Tony Byington, assistant vice president of bakery operations at Hy-Vee. “And this gives us an opportunity to showcase that and display that to our customers.”

Hy-Vee holds six regional contests and one final contest in malls, where customers are invited to come and see the cake designs.

In the regional contests, designers have three hours to create themed displays out of 12 cookies, two sheet cakes, 24 cupcakes and feature cake. The top three winners received a cash prize and were sent to the final competition in Des Moines, Iowa, where they had four hours to compete for glory, cash and a trip to this year’s International Dairy-Deli-Bakery Association conference in New Orleans.

“We invite anybody and everybody to come and watch. We put it usually in the local newspaper, local radio — local news stations are often there, and that way we can reach out to as many of our customers as possible,” Byington said.

Hy-Vee’s regional and final contests this year have gotten a lot of attention from local press reporting on the event and profiling local winners and their cake creations. 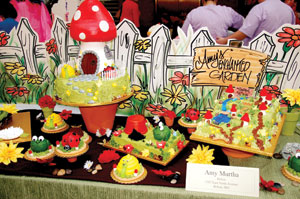 Byington said that Ruth Comer, assistant vice president of media relations, reaches out to newspapers, radio stations and news stations where the regional and final contests are held to promote the contest in the local community.

As for the buzz this contest and outreach has created, Byington called it “awesome.”

“Because we’re a department inside of the grocery store, we don’t get a whole lot of exposure. Even as far as the grocery store print ad goes, we are in a very small section of that, usually. So this kind of attention is just huge and … just very prideful for us.”

In addition to bringing attention to the cake designers, Byington called the competition incredible training.

“It gives [the designers] an opportunity to see designers from all over the company that they would not normally ever see without this contest,” he said.

Participating in the contests is “very helpful because I get to meet up with the best decorators in Hy-Vee, and I always come away with really good ideas,” she said.

Schwendinger developed an under-the-sea theme, including a rainbow-colored, hand-painted fish on a tier cake, coral on a one-tier cake, hermit crab cookies, a shark half-sheet cake, and cupcakes with 3D palm trees.

The sea theme grew out of Schwendinger’s idea to work with an octopus.

“I knew that I wanted to do an octopus for one of my cakes because I have been practicing with 3D sculpting in fondant. And I thought it would be really neat to kind of make the eyeballs 3D and kind of sculpt out some eyebrows,” she said.

This year’s first place winner, Amy Murtha from the Belton, Mo. Hy-Vee, was appreciative of all the talent and different creative cakes at the competition.

“There [were] just tons and tons of ideas there and just crazy looking cakes, just great looking,” she said.

“I’d like to be able to use some of the cakes here at the store just for birthday cakes and stuff like that,” Murtha said, noting that she thinks sharing ideas is part of the purpose of the contest. 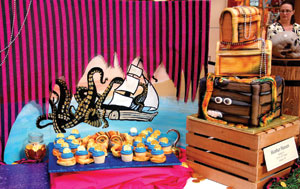 Murtha transformed her cakes into a confectionary world titled “Amy’s Enchanted Garden” complete with a toadstool village and frog, ladybug and snail cupcakes set in front of a picket fence backdrop.

Before the contest, Murtha researched design ideas online and practiced with her coworker Stephanie Dillon, who also attended the finals this year and was runner-up at the IDDBA cake design contest last year.

“We spent many, many nights up here at the store just practicing our cakes and trying to get them just the way we wanted them,” Murtha said.

Katie O’Connor, who won the designer’s choice award this year and first place in 2011 and 2009, said that the designers want to win, but they also look forward to seeing each other’s designs.

“It’s stressful because you want to do a great job, but all the decorators are just awesome,” O’Connor said, when asked about the vibe at the contests.

O’Connor designed a cake as three pots stacked on top of each other, with water and lobsters spilling out the sides for her “Kate’s Krab Shack” theme. Her favorite part of her Southern seafood-themed display was the splatter technique she used to create textured dots on the canning crockpots.

For instance, during the Council Bluffs, Iowa, regional competition, O’Connor said a winner from one of the other regional contests came down to watch, and some designers got T-shirts with “Bad to the Scone” written on the back.

Second-place winner Heather Hansen also mentioned designer camaraderie when asked why she participates in the competitions.

She enters the competition, “in part just to show what Hy-Vee’s capable of doing in the bakery department. And, it’s a lot of fun to get together with all our cake decorating friends and see everybody’s new ideas,” Hansen said.

“The hardest part was the octopus. It took me almost a full hour. It’s the first thing I did because I knew it would take a long time,” she said.

“I actually rolled out 10 tentacles because I used a couple on my tiered cake as well. And put all the suckers on, and get them airbrushed, so that took a lot of time. The rest of it kind of came together a little easier.”

Hansen brought back her cakes to her Omaha, Neb., store where they are on display for purchase or to give customers ideas.

Byington was impressed with how great the cakes came out this year. 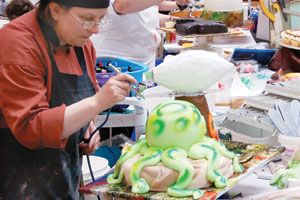 Third-place winner Janine Schwendinger at work on an octopus cake.

This was the first year Hy-Vee incorporated the trip to attend the annual IDDBA conference in June as part of the prize for the top three cake design winners.

In addition to the contest, Hy-Vee’s cake design contest winners attending IDDBA will be given a tour of local bakeries, “and then of course they also have a chance to go to the seminars and walk the show floor and get new ideas and just feel like a part of the company-wide bakery team,” Byington said.

There may be a lot going on at IDDBA in June, but cake designer Hansen knows what she’s most interested in checking out at this year’s show in New Orleans.

“The cake competition,” she said.