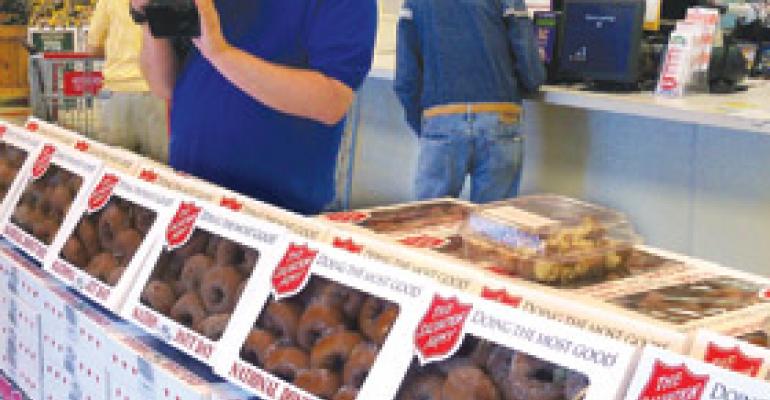 Donut Day a Hit at Riesbeck's

ST. CLAIRSVILLE, Ohio — Riesbeck's Food Markets made the most of National Donut Day this year, building huge displays of specially designed, commemorative boxes of doughnuts bearing the Salvation Army logo, along with a bit of the organization's history.

“It was definitely a win-win-win situation,” Chickery said, noting that Riesbeck's kept the program going every Friday throughout June.

Riesbeck's sold more than 1,500 dozen of its store-made doughnuts in the SA-logo boxes within 24 hours during the first day of the promotion, and that was just at its 13 units that have in-store bakeries.

The boxes, designed by a team at Paper Products Co., Cincinnati, in conjunction with the Salvation Army, stand out with a large, red Salvation Army logo. On the boxes' sides, a blurb describes the charitable organization's relationship to doughnuts — a history that dates back to World War I when its “Doughnut Lassies” served coffee and doughnuts to our troops.

Customers entering Riesbeck's stores were faced immediately with a display that had been brought right up front. In its larger stores, Riesbeck's devoted a run of 16 feet with boxes stacked three to five high.

A huge banner told the story and explained the promotion. The doughnut dozens were offered to customers at a $1 off their everyday price, and 10% of all proceeds were donated to the local chapter of the Salvation Army.

The retailer partnered with Salvation Army chapters in the eight nearby counties in which there are Riesbeck's stores. In fact, the local Salvation Army and Riesbeck's collaborated on a press release to the local consumer media, which initiated “a great response,” according to Chickery.

“We had an NBC-TV affiliate station and a CBS affiliate photographing at two of our stores, and the local papers gave us good publicity.”

Riesbeck's also made a deal with the Salvation Army to produce doughnuts for the local chapters to sell on pre-order. Similar to the way Girl Scout Cookies are sold, the Salvation Army chapters approached businesses and individuals for Donut Day orders, and Riesbeck's filled the orders using the commemorative boxes.

The distinctive boxes were undoubtedly a sales driver at retailers all over the Cincinnati area and beyond. In fact, Daryl Caldwell, deli-bakery director at 14-unit Remke-biggs, an independent based in Erlanger, Ky., told SN it was the boxes that spurred his interest in participating.

And, officials from participating groups agreed that the kickoff of the month-long promotion went very well.

Organized by the Greater Cincinnati Retail Bakers Association and the Salvation Army, the second annual Donut Day on June 3 was a hit; the crowd that gathered for the noon celebration in Cincinnati more than doubled from last year. There, local elected officials and celebrities took part in events that creatively incorporated doughnuts, such as doughnut stacking contests. At the conclusion of the festivities, representatives from sponsors Kroger Co., BakeMark and Dawn Foods presented checks to Major Ronald Foreman of the Salvation Army.