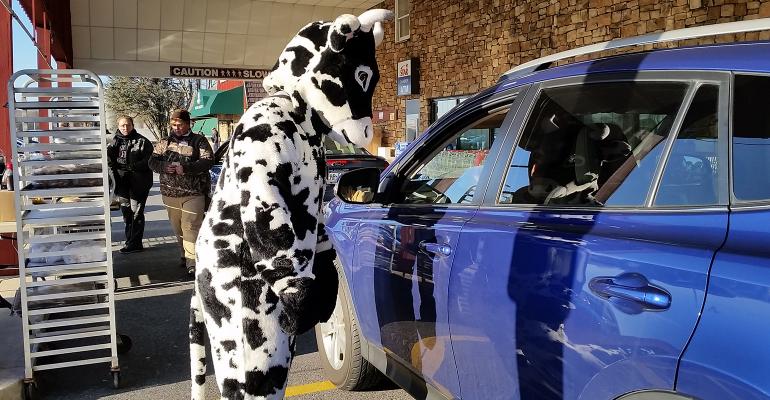 Lots of supermarkets have drive-thru pharmacies, but Oregon Dairy in Lititz, Pa., is likely the only one to boast a drive-thru fasnacht lane.

A fasnacht — the name translates to “Fast Night” in English — is a Pennsylvania Dutch doughnut-style pastry that is historically served on Shrove Tuesday, also known as Fat Tuesday or Mardi Gras, to mark the beginning of fasting on Ash Wednesday.

Oregon Dairy has been celebrating Fasnacht Day for years, and sells them in powdered, glazed and plain varieties. They are only sold one day a year — and on Feb. 13, the store sold more than 15,000 of them. “This is the eighth year that we have done the Fasnacht Day Drive-Thru where customers can come into our carport,” Nancy Brown, marketing manager and special events coordinator at the 35,000-square-foot, one-unit independent that also operates a restaurant, ice cream parlor and its own dairy farm, told Supermarket News. “Customers don’t even have to get out of their cars, and they can pick up their fasnachts and be on their way to work.”

That is an extra convenience for commuters, as the store is conveniently located at the Oregon Pike exit of Route 222, one of the main routes into downtown Lancaster. “A lot of people take advantage of it. Yesterday was a record-breaker for us. We sold over 4,000 fasnachts in our carport alone just from 6 a.m. to 9 a.m.,” Brown said. Another 11,000 were sold throughout the day in the store’s bakery department.

“We had lots of pre-orders and then we had many people that just drove up and would buy just one, or up to four or five dozen,” Brown said.

Unlike at a Dunkin’ Donuts, coffee was not sold at Oregon Dairy’s drive-thru lane — but customers could buy bottles of King Syrup, similar to pancake syrup. “In Pennsylvania Dutch culture they like to serve King Syrup with their fasnachts,” Brown said.

The store used social media to get the word out and boost its fasnacht sales.

“We just advertised on our Facebook page, where we have over 9,000 followers, we did an e-mail blast and we did it on our Instagram,” Brown said. “Plus, this year we created a little promotional video starring Buttercup, our cow mascot, who drives up on a golf cart to order fasnachts. We had Buttercup taking orders yesterday, and the customers had a blast with him.

While we did not advertise in our circular or on the radio, we did do some in-store advertising too.”

Fasnachts will be back at Oregon Dairy next Shrove Tuesday.

“People look forward to it every year. They absolutely love it!” Brown said.