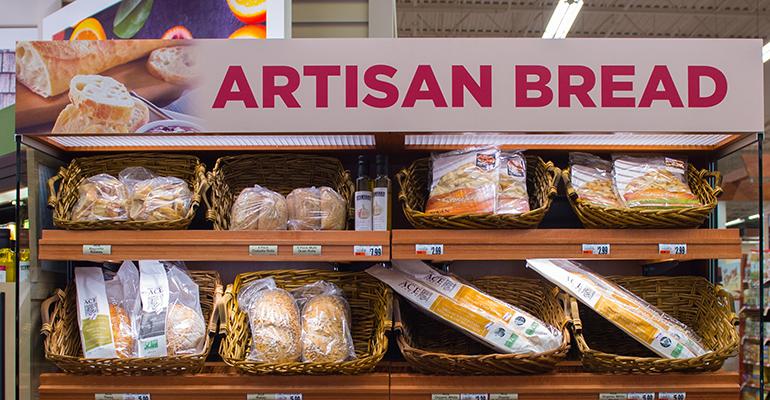 Retailers pitch ‘better for you’ in the bakery

Although indulgent treats may be what first comes to mind when one thinks of the in-store bakery, retailers are increasingly catering to consumers’ health concerns with new bread recipes and an overall emphasis on simple ingredients.

Over the past year, Nugget has added organic sprouted grain varieties to its artisan bread program. Sprouted grains help with digestion and are heart healthy, Wagner noted.

“In early 2016 we promoted it for the month of January, just as people typically start their health kicks with the beginning of the year,” said Wagner.

Nugget also added a line of organic breads made with whole-wheat flour.

While most of the retailer’s breads are packaged in colorful bags, the new organic breads come in a plain bag with a brown print to evoke a “natural” message.

“From a distance you can look at it and see that it’s obviously something different than everything else that’s either on the shelf or on the table,” said Wagner.

Similarly, West Valley City, Utah-based Harmons calls out its seven-grain and whole-wheat artisan breads that are made from local organic flour. The two breads are the only items in the bakery to carry the retailer’s “dietitian’s choice” label, which denotes the healthiest items in the store, according to Ashley Quadros, the dietitian assigned to Harmons’ bakery program.

“We continue to look for ways to offer options for all customers who walk through our doors, and expect to expand on the varieties of offerings in organic breads in Q1 of 2017,” said Bakery Director Karri Zwirlein.

However, such efforts go against general retail trends for labeling and promoting healthy products in the bakery. According to data from Nielsen, only 3.1% of in-store bakery sales come from items with any sort of health claim, and dollar sales of those items dropped 3.5% in the 52 weeks ending Oct. 29, 2016.

Bakery items labeled as “whole grain” account for an even smaller part of the total, with just 0.2% of sales coming from such products. Dollar sales of whole-grain bakery items fell 3.3% in the past year. Matt Lally, associate client director of Nielsen Fresh, noted that the decline can be attributed to a drop off in demand for bread as a whole as consumers look to reduce their carb intake.

On the other hand, Nielsen research conducted on behalf of IDDBA in 2016 found consumers — particularly those from high-income households that are core bakery shoppers — are seeking health claims on products. The IDDBA report suggests that the bakery has been hit hard by recent food fads focused on cutting carbs, and that in-store bakeries have not been emphasizing the health claims customers are seeking — or any health claims at all.

One way for retailers to connote “healthy” in the bakery is by highlighting a pared down ingredient list, the IDDBA report suggested.

“In our stores, our customers are really looking for clean labels. They want to be able to look at that label and know what the ingredients are and have them be familiar,” said Quadros.

Harmons makes the majority of its bakery products from scratch, so even more indulgent items like cookies, brownies and pastries can make consumers feel a little less guilty.

“We use real butter. We use flour. We use vanilla, salt. We don’t add anything funky to it,” said Quadros.

In 2011, Harmons began hiring dietitians like Quadros whose duties include finding ways to remove ingredients such as high fructose corn syrup and partially hydrogenated oils from bakery products. The retailer has taken a systematic approach to improving the healthfulness and quality of all its products, an effort Quadros said has paid off.

“We’ve increased customer satisfaction. We definitely increased sales and profitability in the bakery,” said Quadros, who declined to provide specifics.

Likewise, Nugget is making more of its bakery items from scratch to eliminate ingredients like preservatives.

“One of the biggest trends that I’ve seen in 2016 and going forward is just how much our guests are reading the ingredient labels and questioning things that they don’t understand or can’t pronounce,” said Wagner.

At Tops, other than gluten-free, the majority of customer requests are for clean-label items, Zwirlein said.

“Consumers today are more aware and more educated about their food than ever before and they want to know what they are putting inside their bodies and their families' bodies. If they can't pronounce the ingredient or don't know what it is, they don't want to consume it,” she said.

While retailers agreed it is important to denote better-for-you products in the bakery with signs or labels, they offered differing opinions on whether to integrate such items with the rest of the bakery or merchandise them separately.

Nugget bakeries use both approaches depending on the store layout and the bakery manager’s discretion, although gluten-free and vegan items produced by local bakery partners are always kept separate. The two approaches have evoked mixed reactions from customers; some prefer certain items to have a special location in the bakery while others don’t want to have to go searching somewhere else, Wagner said.

At Harmons, only gluten-free products are segregated in order to eliminate cross-contamination.

“If you’re looking say, for example, for healthy bread we want them to be merchandised with all of our other breads. And this gives every shopper the same experience versus relegating someone to a smaller kind of healthy part of the store,” said Quadros.

Merchandising items that fit a dietary requirement, such as gluten-free or sugar-free, in a separate location is probably the way to go, according to Matt Lally, client manager, Nielsen.

“Households purchasing these products for specific dietary needs want to easily find the products, and the average shopper does not want to inadvertently select an item they didn't intend to purchase,” said Lally. “On the other hand, items promoting added benefits such as ‘omega 3’ or ‘clean labels’ can have a broader appeal and should not be separated.”