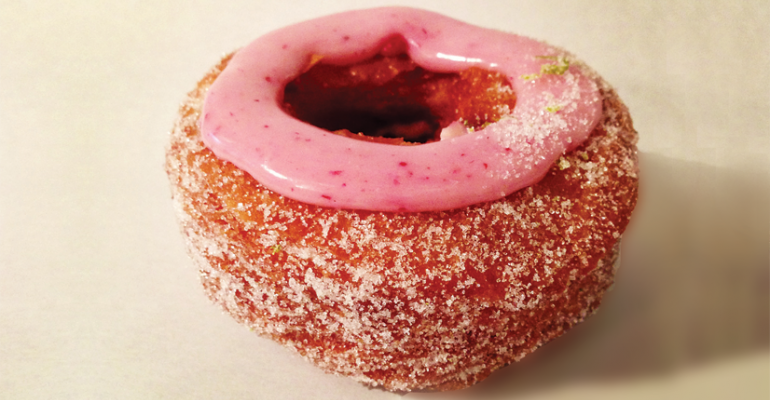 Stew Leonard’s has produced a knock-off of the Cronut, a hybrid doughnut and croissant that has taken Lower Manhattan by storm.

The trademarked Cronut, created by Chef Dominique Ansel, owner of Manhattan’s Dominique Ansel Bakery, is not just croissant dough that has been fried, the bakery points out in promotional materials.

It’s made from a special recipe mixing some of the ingredients of a doughnut and a croissant in different proportions. Weighing 100 to 110 grams, Cronuts are retailing for $5 each. The bakery makes a limited number each day, entirely in-house. People line up before Ansel’s bakery opens to buy the new pastry, which sells out shortly after the doors open. This has prompted Chef Ansel to ration them — now two to a customer. Widely circulated stories tell of scalpers selling Cronuts for $20 apiece.

“We’ve been making regular doughnuts in-store for years and they’re a customer favorite,” Dibble said. “It seemed like a natural progression to try something new.”

The Norwalk, Conn.-based Stew Leonard’s, a four-unit independent, specialty supermarket, began selling cro-dos this week in all its stores. The retail: $3.99 for a two-pack. Dibble’s cro-dos weigh a little less than 3 ounces, almost an ounce less than a Cronut. But a huge photo of a cro-do stands out on the retailer’s Facebook page.

“We did a test batch at our Newington store and gave them out as samples ... to see what our customers thought,” Dibble said. “They were a hit. We also posted a photo of the cro-dos on social media and customers actually came into the store to try them just by seeing them on Facebook and Twitter.”

As SN found out from supermarket retailers in other parts of the country, some had not even heard of Cronuts. If they had heard, they had different reactions.

“We were frying croissants 20 years ago, and people loved them,” Chickery said. “That lasted for quite a while. Maybe we’ll try that again. The time may be right.”

Bakery suppliers are picking up on the idea.

Steve Beaird, central facility manager at nine-unit Kowalski’s Markets, St. Paul, Minn., said he has had vendors — just in the last month — showing him a pre-made product — part doughnut and part croissant — they called a “doissant.” But Beaird was having none of that.

“I think the real trend over the last two years has been a series of ‘nichey’ stuff,” Beaird said. “You wonder what the next goofy thing will be. They attract attention, but they don’t have staying power.”

What has had the most staying power at Kowalski’s is just good, store-made chocolate cakes and handmade cookies, Beaird said. And there’s no sign of those lines fading, he said.

“No more crazy flavors, just the ones people are used to. We’re going back to basics, simplicity.” Results are good.

In fact, Beaird’s handmade cookie line is turning in remarkable numbers probably, Beaird said, because he has added tiny ones, weighing half an ounce.

“I know mini cookies have been around forever, but these are obviously handmade and heavy in particulates. Customers asked for them. The favorites are chocolate chunk and date cornflake.”

A surprise even to Beaird, the mini cookies launched a few months ago didn’t affect sales of his regular-sized, handmade cookies at all.

“We’ve cut down our SKUs, and don’t introduce new products so often. Our chocolate cake couldn’t be more basic, but it’s one of our best sellers.”

Simplicity and small sizes are the trend at Mustard Seed Market & Café’s bakery, too.

“It’s been just in the last six months that miniature items have picked up,” said Laura McDonald, bakery manager at the two-unit retailer’s Solon, Ohio, store.

Gluten-free items in Mustard Seed’s Bakery are taking off, too, McDonald said.

“So are vegan items.”

That may not be surprising since Mustard Seed features all-natural baked goods and other food, but something has lit a fire under vegan sales just in the past year.

“We also sell a lot of individual sizes of everything … a huge number of single cake slices, especially to the lunch crowd.”

Even with the small, the simple, the natural and gluten-free items gaining in the bakery, there’s still something attractive about doughnuts.

Maria Brous, spokeswoman for Publix Super Markets, Lakeland, Fla., thinks the economy may have something to do with it.

“In a tight economy, doughnuts have flourished. When you compare the price of six doughnuts to a coffee cake that serves six, the lack of disposable income has pushed more customers towards the doughnuts,” Brous said.

Of course, gourmet spin-offs like Cronuts and cro-dohs are exceptions when it comes to price. So is a doughnut cake at Marketplace Food & Drug in Minot, N.D.

At a retail of $18.99, that doughnut cake probably wouldn’t be the choice of a penny-counting customer.

“But we see our doughnut cake, all of a sudden, growing in popularity,” Nyla Stromberg, the store’s cake department manager, said.

As it is elsewhere, the cupcake trend is still going strong at Marketplace Food & Drug.

“They’ve slowed down a little, but they’re still a strong category,” Stromberg said.

Red velvet cake sales may be waning on the East Coast, but not at Marketplace Food.

“It’s here to stay — for a while,” Stromberg said.

That may be a surprise so far north, but it’s not a surprise in the South where it originated. Piggly Wiggly Carolina, Charleston, S.C., reports unfailingly strong sales of red velvet cakes and cupcakes, even muffins.

“Red velvet is not dying out here. In fact, it’s huge. One of our strongest sellers,” said Jeff Harrell, deli-bakery director at the 100-unit chain.

But another Southern chain, United Supermarkets, Lubbock, Texas, has seen a slowdown in red velvet.

“Red velvet cakes and cupcakes are not as popular as they were,” said Tammy Kampsula, United’s business director of bakery.

“We’ve dedicated a whole showcase to single cupcakes at our new Market Street store in Lubbock,” Kampsula said. “All single-serve items continue to grow, in service and self-service.”

At Rouses, Thibodaux, La., rainbow cakes are getting very popular. “That’s not color in the icing, but in the cake itself,” said Chaya Conrad, the chain’s bakery director.

Conrad said she’s about to start baking cakes with a design baked inside them, such as a heart or a shamrock.

Possibly the next new item to take off in supermarket bakeries will be éclairs, some observers said.

“The main trend that we see in Europe that has yet to make the leap to the U.S. is éclairs,” said Anne Terrien, assistant to Carol Christison, executive director of International Dairy-Deli-Bakery Association, Madison, Wis.

“Fauchon in Paris and Selfridges in London are both featuring éclairs heavily this year,” Terrien said. “What makes their success seem a bit more likely than, say, the macaron, is that the taste profile is already familiar … and they are as customizable as cupcakes.”

Among the steady, long-lived trends such as cupcakes, single servings, and red velvet in the South, a fad has emerged that could grow into a trend. It’s the “reveal cake.”

Expectant parents are throwing parties to reveal the sex of their child via a cake-cutting. And most retailers SN talked to in different parts of the country said they began getting orders about six months ago.

The cake itself to be featured at the party is either pink or blue, or its filling is pink or blue. Since the icing is a neutral color, it’s not until the cake is cut that the sex of the child is known. Sometimes, not even the parents know until the cake is cut, because their doctor, or a nurse, has given them a sealed, news-containing envelope that they drop off at a bakery.

Video: Big Opportunities in the Bakery Category
May 28, 2013