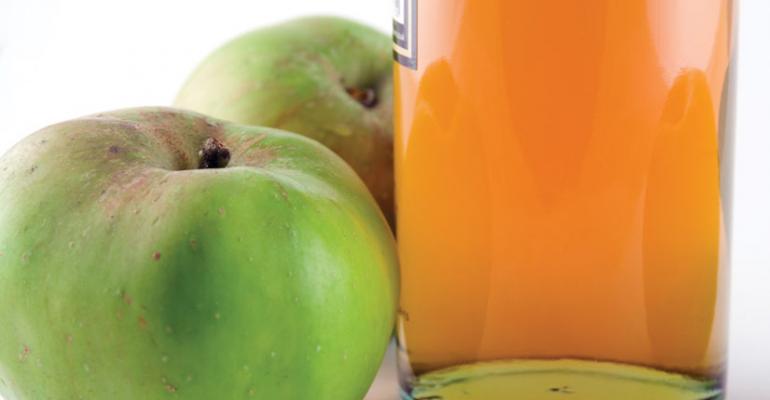 Hard Core: All the Buzz About Hard Ciders

&ldquo;Ciders have more than their fair share of shelf space in our beer coolers. Because of the growth rate and consumer interest we are trying to be ahead of the curve with ample shelf space on these items.&rdquo; &mdash; Marty Miller, category manager, Niemann Foods

With sales up 80% in supermarkets, hard ciders are making it look easy.

Despite emerging from obsolescence just 20 years ago, American hard ciders are holding their own among inventive craft beers.

True, ciders contribute a mere 1.3% of sales to the overall beer category, according to Dan Wandel, senior vice president of Beverage Alcohol Insights for IRI, but given their growing appeal with women, gluten-intolerant drinkers, 20-somethings and those suffering from beer fatigue, marketers are getting more entrenched in the category.

“Ciders have more than their fair share of shelf space in our beer coolers,” said Miller. “Because of the growth rate and consumer interest we are trying to be ahead of the curve with ample shelf space on these items.”

Every major beer company is likewise competing in the space, either with new brands or by acquiring existing ones, according to Nielsen.

Hard ciders are trending with all variety of shoppers, but because of their loyal fan base of women they are an especially good fit for supermarkets, observers note.

Shoppers with dietary restrictions are also discovering the category. While gluten-intolerant drinkers are free to drink wine, many are exploring hard ciders as an alternative to malt-containing beers, which are off limits.

“Gluten-free drinkers gravitate to cider since they are made with fermented apples and are a flavorful, unique alternative to beer,” said Sipes.

But not all ciders are safe for Celiacs, warns Lola O’Rourke, a registered dietitian and director of consumer education for the Gluten Intolerance Group of North America, Auburn, Wash.

“Many hard ciders are safe for gluten-free consumers to have and certainly make them a good alternative to gluten-containing beer, but some do contain malt, which means that they’re not safe,” she said.

The launch of Cidre comes one year after the beer maker added Michelob Ultra Light Cider — which touts one-third fewer calories than traditional ciders — to its U.S. mix.

A national rollout of  Cidre is scheduled for early 2014, according to reports.

Niemann Foods’ Miller is testing premium-priced Cidre in four-packs in select markets. While it’s too soon to gauge performance of the brand, he is keeping a close watch on sales in an effort to offer the right category mix. Presently the retailer merchandises 12 hard cider brands.

“I am still cautious about authorizing too many brands and flavors because it [may cost] too many inventory dollars and cause confusion for the customer instead of excitement,” he said.

Availability is another challenge. While Miller is evaluating Cider Boys, Fox Barrel and Strongbow, limited distribution in Niemann Foods’ operating areas does not bode well for these brands, he said.

Nick Long, wine, beer, coffee and tea manager for Southern Season, a specialty store, eatery and cooking school in Mount Pleasant, S.C., has sourced a mix of popular and lesser known ciders for the store that’s scheduled to open Sept. 4.

“Brands like Angry Orchard, Woodchuck and Harpoon are great because they draw people’s attention to the category and once they start to enjoy crafted, fermented beverages they’re liable to expand to other [ciders]. It’s the same thing that happened with craft beer,” he said.

“Ciders are crisp, refreshing and have sweetness levels that range from bone dry to super sweet, which goes a long way with a little spiciness,” he said.

While ciders share many of the same qualities as beer, retailers are somewhat constrained in the ways they can promote them.

At Jungle Jim’s International Market in Ohio, shoppers can select from 70 SKUs of domestic and imported cider for customized six-packs, but only beer can be carried out in a growler.

Ed Vinson, beer and wine operations manager at Jungle Jim’s Fairfield, Ohio store, would like to offer cider pours but, “The law says we can pour beer in growlers. It doesn’t say cider.”

While it would be nice to have on tap, the limitation has not hurt sales of hard ciders, which occupy an 8-foot section of Jungle Jim’s alternative beverage area. That’s more than double the space allotted to the category just a decade ago.

“Ciders like Angry Orchard are very, very popular,” Vinson said. “You might sell 25 cases of them on a weekend.”

At Jungle Jim’s, domestic ciders Ace and Woodchuck keep pace with imported brands like Magners and Strongbow, which embody a centuries-old tradition of cider making.

Brad Page, spokesman for the recently formed U.S. Association of Cider Makers, and vice president of the Colorado Cider Co., explained that domestically produced ciders are just now gaining a foothold due in part to ingredient supply.

“Cider apples are more akin to wine grapes vs. table grapes,” he said. “These apple types are more readily cultivated in France, Spain and England, but people are starting to cultivate them here in the U.S.”

While traditionalists may scoff at deviation from time-honored cider recipes, American cideries are taking a page from microbrewers and experimenting with flavor profiles and barrel aging.

“Juice and yeast are what make the cider ‘hard,’” explained Bret Williams, chief executive officer of the Vermont Hard Cider Co. “After that the door is wide open for any number of ingredients to be used.”

Blueberry juice is a key ingredient in Woodchuck’s Limited Release Summer cider, and its Private Reserve Belgian is made with orange peel and coriander.  The Colorado Cider Co.  combines cider, hops and lemon grass for its Grasshop-Ah, and its Ol’ Stumpy cider is aged in chardonnay  barrels.

The accelerated growth of hard cider comes at a time when microbrewed crafts have gotten drinkers accustomed to paying a premium for quality.

Indeed, with retails as high as $10 per bottle, hard ciders are priced comparably to craft brews, but considerably higher than conventional beer.

Page is hopeful that drinkers will find the investment worthwhile.

The alcohol content of American hard cider generally falls somewhere between that of beer and wine. But exactly where depends, in part, on the natural sugar level of apples, which fluctuate from year-to-year depending on growing conditions.

When alcohol by volume is 7% or less cider is taxed as beer; above 7% and it’s taxed at a much higher rate as wine.

“There has been this artificial division in the tax regulation at 7%, that doesn’t take into account the differences in seasonal sugar levels of apples,” said Brad Page, spokesman for the U.S. Association of Cider Makers, which is pushing for a structure that aligns the alcohol content standard for hard cider with the natural sugar content of apples.

The CIDER (Cider Industry Deserves Equal Regulation) Act, introduced this month by U.S. Reps. Earl Blumenauer, D-Ore., and Chris Collins, R-N.Y., would allow cider with up to 8.5% ABV to be labeled and taxed as cider.

“We are going to work hard with Reps. Blumenauer and Collins to educate other members about this legislation and our industry’s needs so that we can increase our competitiveness, grow our industry and create more jobs,” said Mike Beck, president of the USACM, in a statement. “We are hopeful that a Senate companion bill will be introduced soon, and that this legislative change will be made part of any tax legislation that is considered by Congress.”