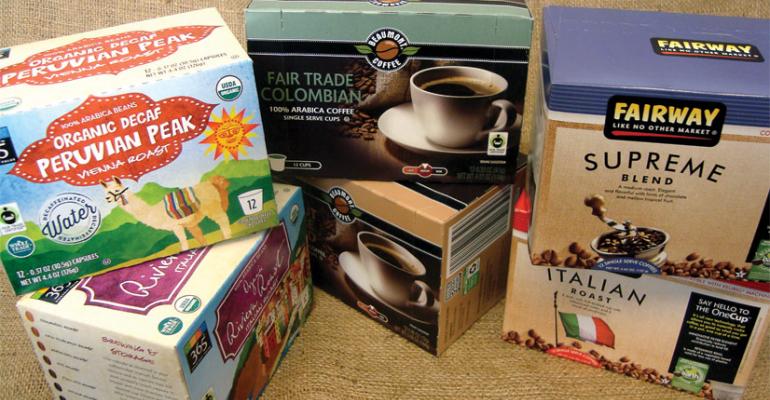 With store-brand offerings, retailers are waking up and smelling single-serve coffee.

“After months of research, countless emails, phone calls, meetings and a million-and-one cups of OneCup coffee samples, we met our equal — a hands-on partner with a new methodology for production: Using a mesh basket through a recycled plastic ring (made of a vegetable-based solid) giving us — cue the drumroll please — a single-serve coffee pod that is 97.33% biodegradable. Landfill, begone!” said Lori Levy, Fairway’s director of trade and product development, in a Fairway Market Blog post.

The fair- and directly-traded coffee comes from Panama.

“These were robust flavors from beans picked at their syzygy, and that were then roasted with the scrutiny of a masterly and practiced eye until every batch and every bean achieved its maximum value and purpose,” said Levy. “The Fairway OneCups are the highest quality at the lowest price possible.”

Upon introduction, the 12-pack retailed for a promotional $6.99.

The OneCups come at a time when the single-serve brewing format is gaining momentum. During the 52 weeks ending June 13, 2013, single-cup coffee sales skyrocketed 62.9% in supermarkets to $836.7 million in sales, according to IRI.

Americans are also drinking more coffee with consumption climbing five percentage points this year, according to the NCA National Coffee Drinking Trends study. What’s more is that 13% of Americans polled last spring drank a coffee made from a single-cup brewer the previous day, up from 4% in 2010.

In comparison, past-day consumption of coffee made from a drip coffee maker dropped from 43% to 37% over the same time period. Considering that single-cup brewer ownership has grown from 10% to 12% since last year, coffee drinkers are likely switching formats. And given the ubiquity of single-cup brewing machines, and standard Keurig brewers, in particular, it behooves private-label marketers to get on board with the trend, noted Jim Hertel, managing partner at Barrington, Ill.-based Willard Bishop.

“If [retailers] aren’t participating then they’re kind of dooming themselves to a slow death in the category,” he said.

Now is a particularly opportune time, according to Hertel, since patents that Green Mountain Coffee Roasters held on its Keurig Brewers and K-Cup portion packs have been expired for a little over a year. Prior to their expiration, Green Mountain required special agreements with coffee brands interested in  licensing its K-Cups.

Also working in private brands’ favor is the fact that Keurig brewers have reached critical mass in the marketplace, according to Hertel.

Price is also a factor, and Treehouse’s Reed noted that given the availability of value brands, there is a 100% price spread between low-cost and premium-priced pods.

“For the individual consumer, there’s more choice now, and it’s both branded and in the private-label segment as well,” said Reed. “And the difference is the prices there on a per-cup basis, it’s a spread of 100% from bottom to top. And when you look at the brands, you can see that consumers are responding to the different segments.”

Safeway, Pleasanton, Calif., was one of the first food retailers to get into the private-label space last year when it debuted Safeway Select pods that make French Vanilla Cappuccino, Hazelnut Cappuccino and Milk Chocolate Hot Cocoa in Keurig machines.

“During meetings about our San Francisco Bay OneCups, we approached them about manufacturing a private label,” he said.

Safeway and other retailers had been selling San Francisco Bay’s OneCups beginning in 2011 while the Keurig patents were still active. Since Green Mountain thought OneCups infringed on its K-Cup patents, it filed suit against Rogers Family. But last May, a Boston court ruled in Rogers Family’s favor. The case is currently under appeal.

While the suit initially caused retailers to shy away from the company, Rogers Family currently fields about 10 calls per day from independent coffee shops, online retailers, supermarket chains and mass merchants that are interested in a private-label line.

“Everyone wants to jump in the game now,” he said.

Indeed, shortly after the Keurig patents expired, Supervalu threw its hat in the single-cup coffee ring with its Java Delight “UnCup,” a single-portion size of its premium coffee product.

“The UnCup pod provides our customers with a premium single-serve coffee at an affordable price,” said Sam Mayberry, Supervalu’s vice president of private brands, at the time of the launch. “It was also important for us to develop a product that is more environmentally friendly, and our UnCup single-serve pod uses 30% less material by weight than the leading national-brand pod.”

Impact on the Environment

Just as water bottle waste led some to seek earth-friendly alternatives, some are considering the environmental impact of single-serve coffee cups when sourcing for their private label.

About 9.1 billion single-serve cartridges end up in U.S. landfills each year, which if laid out end-to-end, according to Rogers Family Co., would stretch more than 62 miles.

Last month, the company rolled out OneCup Bio, which it claims has the highest percentage of biodegradability of any single-serve coffee product. The cup comprises bio-based material sourced from renewable natural resources including vegetable oil, various plant starches and tree by-products. It replaces its traditional OneCups.

Presently, the company is working to make OneCup’s mesh filter biodegradable. The move would render the pod waste-free.

“Some retailers are very open to the [Bio] and embrace the concept while others don’t care,” said Rogers.

Aldi has also gotten on board with single-serve coffee. Last month, it announced plans to increase distribution of its exclusive Beaumont Coffee pods, which are Keurig-compatible and retail for $5.79 per 12-count box.

“With increased consumer interest in single-serve coffee cups, we first began offering the product for a limited time, then in a handful of states,” said Aldi President Chuck Youngstrom of the Breakfast Blend, Dark Roast, Hazelnut, French Vanilla and Fair Trade Colombian pods. “Now we’re able to offer the more than 25 million customers who shop our stores each month a convenient coffee option at Aldi everyday low prices.”

Whole Foods is another recent entrant with single-serve pods sold under its 365 Everyday Value brand. At $8.99 per 12-pack, the cups are on the pricier end of the of the store-brand spectrum, but are still less expensive than most national brands.

“People kind of have that [single-cup coffee] buying habit engrained and now they’re looking for the value opportunity,” Hertel said.