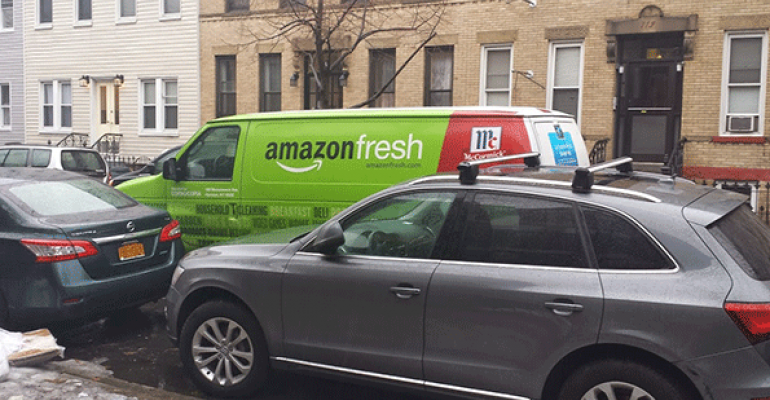 It's not you, AmazonFresh, it's me

All that stood between me and Internet groceries was a cartoon monster.

My 8-year-old was the last holdout as our family made the decision recently to break up with Netflix and commit to Amazon Prime, the Internet retailer’s loyalty scheme that among other perks, brought us a comparable source of streaming movies and television — including the Pokemon cartoons our boy could not do without — and a month of free exploration of its newly launched grocery delivery service, AmazonFresh.

It was the latter bit that intrigued me. Newly available in my part of Brooklyn, Amazon Fresh offered a chance to experience firsthand just what brick-and-mortar competitors are up against. Although I’ve had FreshDirect available to me for some time, and Stop & Shop’s Peapod service as well (I’ll get to them in a bit), we hadn’t used an Internet grocer before, beyond a few experiments replenishing staples through Amazon, drugstore.com and Amazon’s pet food specialty store Wag.com. 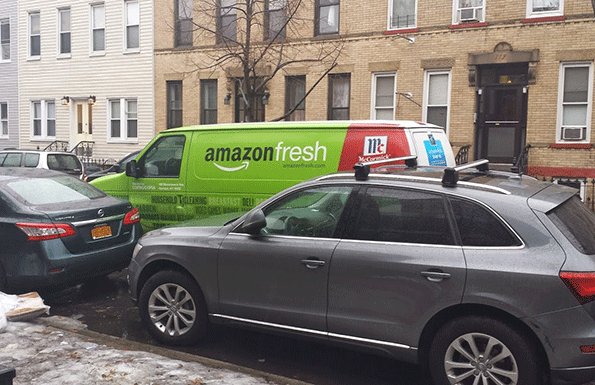 One double-parking adventure aside, AmazonFresh deliveries were quick and efficient to the blogger’s Brooklyn residence.

I’ll save you the trouble of reading till the end and reveal that we really, really liked AmazonFresh, but all the same we’re highly unlikely to continue to use it now that our month-long free trial period is ending. That’s because it’s about to get awfully expensive, but also because we encountered issues with selection and out-of-stocks, and for all the terrific convenience AmazonFresh offers, it’s just not the way we want to shop, at least not all the time.

Let’s talk about what they did right though. Ordering was fast, straightforward and easy, and the service was outstanding. We ordered four times and took attended delivery at around the same hour we’d otherwise be leaving the house to begin our weekly food shopping. For us that most frequently means a short car trip to a small but quite adequate Key Food; but depending on the weekend’s other plans it could mean a longer drive, either to the large, suburban-style Stop & Shop near the Home Depot or the chaotic but fun-to-shop Fairway down in Red Hook. Occasionally we’ll shop the Food Bazaar, which I’d describe as a kind of ethnic Fairway, a big former Pathmark transformed into a fresh food superstore for multiethnic shoppers in Queens.

We haven’t been to any of those places since we first used Amazon and haven’t missed them, or the time we spent there. Each of our Amazon orders arrived at the earliest moment of our one-hour window. And with the exception of the week when the van double-parked, held up an MTA bus, and had to circle the block to return only to get caught behind a garbage truck, the exchanges were smooth and quick. After one week we learned to quickly unpack at the door and send the totes back with the driver. As a bonus, the totes are lined with strong plastic bags we’ve been reusing as kitchen garbage bags.

Interestingly, the fill-in shops where we pick up an item or three during the course of the week — in our case, a Rite Aid, a C-Town, neighborhood natural foods joint and bodegas within walking distance — have barely been impacted at all by our switch to Amazon. Theoretically, Prime membership can tackle these occasions, too, but I can’t see any real advantages: Locals, you’re safe. 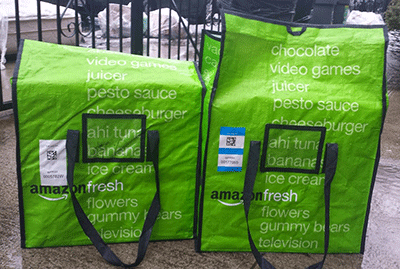 The blogger “really liked” AmazonFresh, but a major impediment to Prime membership is its hefty annual fee.

Product quality was just fine. Fresh items from pears to pineapples to pork were all as good as I’d pick in a store. The selection trended toward the “better”: One could easily shop Amazon for cheap processed food if that’s what they wanted but they would also find Pat LaFrieda meats, Boar’s Head deli, and Fair Trade certified coffees. And in at least some cases Fresh allowed me to call on the whole of Amazon’s selection: For example, in one order we had them throw in a computer cable we needed, which saved a trip, and wasn’t the kind of thing you’d find even in a well-stocked local grocery.

Now let’s address what could be better. Knowing this offer had a limited timeline, my strategy in the early going was in fulfilling those parts of my shop that are the most inconvenient. But here’s where a more limited selection of brands and sizes at Amazon Fresh interfered: If someone else is carrying it to my door, I want the 40-pound box of cat litter, not the 28 pounder; the 18-roll paper towel pack, not the 8-roll. If I need to pay to shop like Costco, then give me Costco quantities (if not Costco prices). This was not the case with all items, but enough to where I was frustrated finding even everyday products like coffee in the pack sizes I wanted.

Out-of-stocks were another issue. And not on rare items but on things like boneless chicken breasts (available, but not for four days) and grapes (ordered but not delivered). No brick-and-mortar store I know of can get away with this, and I’d imagine the same fate awaits virtual retailers that can’t get this part right.

We also had a mix-up, although that worked out to our favor. We ordered organic buckwheat soba noodles (in a 10-pack for something like $18) but were delivered the same brand in the wrong variety. A phone call to Amazon resulted in the item price deducted from our total, a $20 credit applied to the next order, an extra month tacked onto our yearly Prime membership, and they let us keep the noodles. (The grape failure won us that discount, plus a $10 credit.) Goofs like this aren’t going to help Amazon’s bottom line, but it won’t hurt its reputation for great service.

Pricing was only okay. While I would guess AmazonFresh aims for fair everyday prices, it would do well to take a lesson from old-school rivals and offer more specials. This would not only help build a better price reputation, but serve shoppers accustomed to pivoting their purchasing decisions based on what the store is offering in a particular week. Around here at least, that’s practically everyone.

Finally there’s the annual fee, which at $299 is a real sticker shocker. At that cost I’ll be pressured to fight for my money’s worth even though I know that with better weather on the way I’m going to do more and more fresh shopping at the local farmers' market. That’s an issue both virtual and physical supermarkets are going to find it difficult to solve.

So what’s next for us? Perhaps a $6.95-per-delivery service like Peapod could get the nod, but frankly if the local Stop & Shop had made a better impression on us over the years we might have tried that already. Friends who use FreshDirect swear by it, but it also doesn’t offer the variety to get as much shopping as we’re willing to commit to an Internet solution.

As for AmazonFresh, we liked it a lot, just not for $299 a year. There’s always regular Amazon for the cat litter, which makes me think this, after all, wasn’t just an elaborate scheme to gain my son’s Pokemon streams.