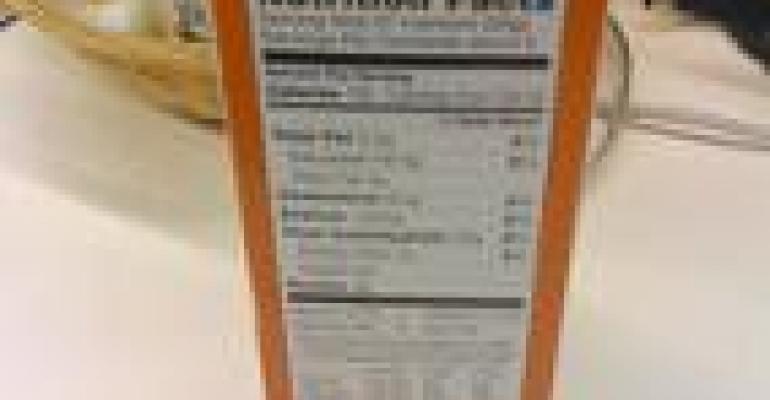 Health-conscious shoppers are frustrated with the Nutrition Facts label for several reasons, the most obnoxious being its concept of serving sizes. A candy bar, for instance, might seem like a reasonable choice with 8 grams of fat and 160 calories listed. But the serving size of 2.5 tells a very different story. Who eats a candy bar in two and a half sittings? Unrealistic portions like this often hide the less-than-healthy truth behind many foods.

To the vast majority of consumers, the Nutrition Facts panel is downright boring — a black-and-white slab of numbers tut-tutting you from the back of that colorful package. Granted, the Food and Drug Administration can’t compete with manufacturers in terms of design. But surely they can do better than this.

According to a survey by The NPD Group, the percentage of people who frequently check the panel has dwindled from a high of 65% in the early ‘90s to barely over 50% currently. Engagement has idled in that 50% range for some time, meaning the label isn’t completely losing shoppers. Then again, at a time when we’re supposed to be rallying against a national obesity crisis, the failure to engage new users is the more glaring statistic.

Needless to say, it’s time for a redesign. The FDA is currently working on this, and deputy commissioner Michael Taylor has noted that, while it won’t be a complete overhaul, it will address glaring issues like serving sizes.

In the meantime, there are plenty of others with their own ideas and designs. This recent contest organized by the University of California Berkley’s journalism school and Good magazine featured entries that did away with any semblance of the current Nutrition Facts label. The winning entries — judged by the likes of Michael Pollan and Michael Jacobson — were colorful and offered symbols like thumbs-up and thumbs-down to indicate whether amounts of various nutrients were beneficial or not.

Such an overhaul is probably wishful thinking. The FDA wants to balance the interests of consumers and the food industry, and manufacturers don’t want a label that would cast too negative a light on their products.

Rather than worrying about making judgment calls, the new Nutrition Facts label should be transparent without pulling any punches. A splash of color here and there wouldn’t hurt, either.