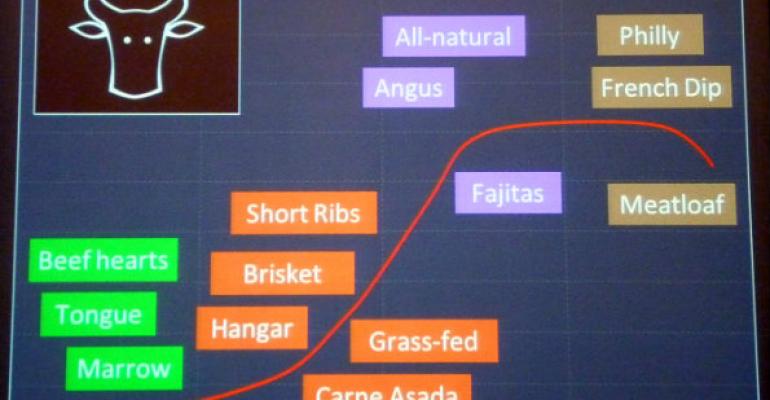 The Meat Conference kicked off in Atlanta with panels on figuring out what consumers want from meat and poultry. At “Creating Consumer Demand for Meat,” Datassential managing director Jack Li outlined the different stages of a trend and which types of meat are currently on the trend timeline.

The first stage of a trend, or inception, starts at fine dining restaurants, ethnic independent restaurants, and ethnic markets. Meats currently at this stage include game hens, chicharron (fried pork rinds) and beef hearts. “Beef hearts, tongue and marrow are all things that we're seeing turn up on menus. Not at McDonald's yet, but on menus,” said Li. 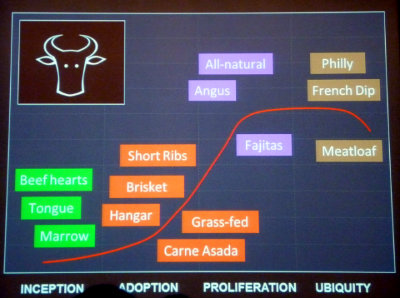 In the next stage, adoption, the trend moves to food trucks, fast casual restaurants, specialty grocers and gourmet food retailers like William Sonoma. Today, the meats at this stage are dishes like carne asada, pork belly and upscale fried chicken. “That $20 fried chicken that you're starting to see turn up on some places,” said Li.

Proliferation is the third stage of a trend, when it starts to reach the masses via casual dining chains, quick service restaurants and traditional grocery stores. Some meats that have reached this stage include pulled pork, Angus beef and encrusted chicken. “One of the keys here is, if you're going to go the encrusted route, you often want to have a pretty cool sauce to go along with it,” said Li.

In the final stage, ubiquity, a trend has already reached it's peak and everyone knows about it. However, these foods can sometimes find new life as part of another trend or variation. Ubiquitous meats that have seen some recent resurgence include chicken pizza, due to the rise of flatbread pizza; Philly cheesesteaks, which have seen new, upscale versions; and pork ribs, because bones are popular again. “It's cool to eat with your hands all of a sudden,” said Li.