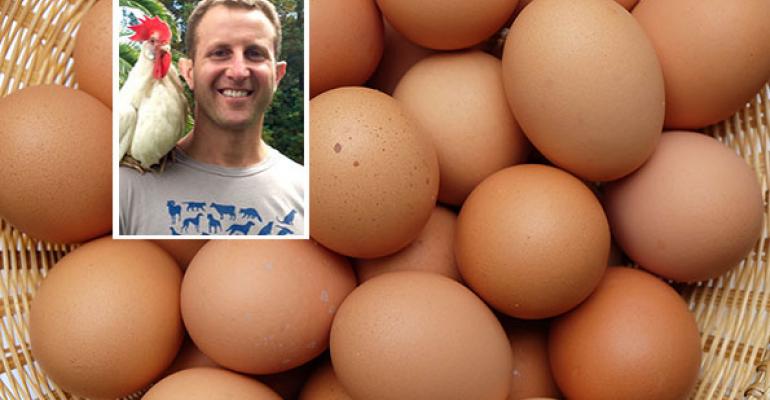 You could say the grocery business is in my family’s DNA.

In addition to my father’s parents running a local grocery store in Washington, D.C. for 27 years, my mother’s father, David Furman, cofounded the Farm Fresh chain of grocery stores in 1957. His vision was to bring good food at a good price to good people. By the time he passed away, in 2014, he was 95 years old. He’d long been retired, and his company had been owned by Supervalu for a decade and a half.

Today, I believe my grandfathers would be proud to see so many major companies fostering a better food supply through their work on important social issues like animal welfare.

Take chickens, for example. In the 1940s, a group of Los Angeles farmers were trying to find a way to meet the demand for eggs with minimal effort. Their solution? Wooden, wire-floored cages that each confined one bird. The farmers brought animals in from pastures and barns, cramming them into these cages one-by-one.

By the early 1960s, the clunky wood had been replaced by thin wire and each cage no longer contained one animal, but several. Producers could now fill a single facility with previously unimaginable numbers of birds. Hundreds of thousands of birds pumped out eggs, their keepers with little knowledge of animal husbandry.

By the 1990s, this style of industrial farming dominated the market. The era of the caged chicken had taken hold, their eggs filling shelves nationwide.

But much was sacrificed. Birds confined in cages live stress-filled lives of deprivation. They exist in near-darkness, crammed on top of each other. Birds are unable to perform many of their most basic natural behaviors. Forget laying their eggs in nests, perching or dust bathing; these birds can’t even spread their wings.

This is animal abuse that consumers simply don’t support. As FMI reports, “when it comes to attributes beyond those that render personal benefits, shoppers prioritize animal welfare second only to employment practices.”

And it’s not only consumers who don’t support the abuse, but also consumers who are put at risk by it. As a headline from the industry publication World Poultry made clear: “Salmonella thrives in cage housing.” Indeed, study after study finds higher odds of salmonella — up to 3500% higher — in cage housing versus in cage-free.

Fortunately, the food industry has a solution: cage-free housing. In 2015 alone, dozens of the country’s largest food companies announced plans to convert to 100 percent cage-free eggs. Restaurant chains like McDonald’s, Burger King, Taco Bell, Jack in the Box, Denny’s, Dunkin’ Donuts and many others are now moving in this direction. The largest CPG companies — Nestle, Kellogg’s, General Mills, Unilever, Barilla and more — are, as well.

Major grocery chains are also tackling the issue. As Costco — which sells billions of eggs each year — recently made clear, the company “is committed to going cageâ€free for its egg procurement.” And it’s making major strides already. “In calendar 2016, we expect to sell over one billion cage-free eggs,” Costco writes. “We are working with our suppliers toward a complete and sustainable transition to a cageâ€free supply chain.” Target recently joined Costco in its public commitment to go 100% cage-free, targeting 2025 as its goal.

These decisions are having a tremendous impact. Fox News reports 2015 was the “year of the cage-free hen.”

In fact, even the country’s largest egg suppliers — titans like Rose Acre Farms, Hickman’s, Rembrandt Foods and Michael Foods — are now committing to a cage-free future.

The push to free hens from their cages has reached its tipping point and is something I’m certain my grandfathers — both of whom cared deeply about using their grocery stores to make the world a better place — would support wholeheartedly. At a time when hot-button food production issues can cause division and debate, treating animals better and providing consumers with a safer product seems to be the push towards progress that everyone — restaurants, grocery chains, CPG giants and egg producers alike — supports. These decisions to go cage-free are about driving a more humane food supply and more humane society. They’re about, well, providing good food at a good price to good people.