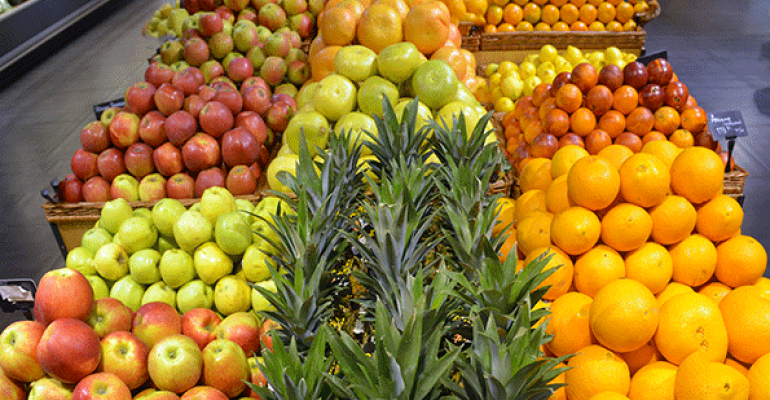 Time to rethink the produce department?

The thing about produce departments is, they kind of all look the same.

“And not even from an assortment standpoint. Even just a merchandising strategy,” said Jonna Parker, director, Nielsen Perishables Group.

“It’s an important department, which obviously is growing really, really well, so you almost don’t want to break something that’s not broken. But it is, of all the fresh departments, it’s not as easy as I think sometimes we like to think that it is. Or not as one-size-fits-all potentially as retailers often think it is.”

Fruit and vegetable sales at retail totaled an impressive $42.1 billion in the 52 weeks ending May 30, according to data from Nielsen Perishables Group. Sales of vegetables were up 4% while fruit sales rose 3.6% in the past year.

However, not all produce categories are growing.

“And that’s actually really sad to me because it certainly could be, if we thought about less of category infighting and more about produce’s importance in the store,” said Parker.

Pulling off that kind of growth could be tricky, however. FMI’s first Power of Produce report, released this year, found 99% of households buy vegetables and 98% buy fruit.

“Adding more people to our category is nearly impossible. But we can strive to increase the frequency of consumption,” Anne-Marie Roerink, principal, 210 Analytics, and the author of the report, said in an FMI webinar about the Power of Produce this week.

About 25% of consumers say they only shop the produce department sometimes, compared to two-thirds who do so frequently.

“So what if we could move some of those people from just sometimes to frequently? That could be a huge boost to our category,” said Roerink, adding that men and lower income households would be two demographics to target.

What changes might retailers make? Roerink noted that customers said produce departments were weak on things like helpful or knowledgeable associates, stocking specialty items and generally providing helpful information, such as recipes or serving suggestions.

“So it is really about helping that shopper make an easier decision or try something new,” said Roerink.

One example from the webinar showed a serving suggestion for tomatoes that included bread, cheese and basil.

Similarly, Nielsen’s Parker suggested retailers need to think more about “positioning produce at the center of that shopping trip,” and what kind of strategy that looks like for a value or mainstream grocer vs. an upscale, fresh-focused grocer.

“Literally every retailer and every consumer demographic, produce is essential,” said Parker.