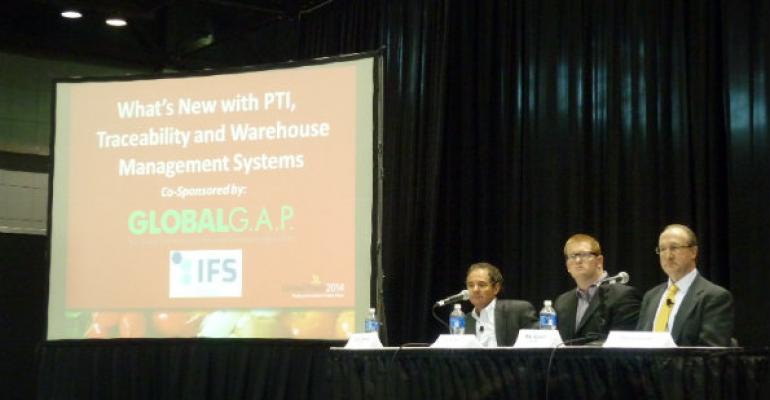 Over 90% of produce cases coming from Walmart's suppliers are now labeled with PTI standard labels, executives said in a discussion on PTI progress on the show floor. That's up from just over 20% in November 2013 when Walmart began requiring the labels.

The retailer made the decision not to reject produce that wasn't labeled. 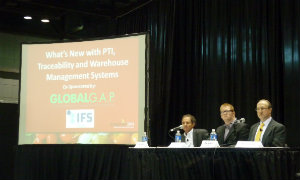 “Because I knew that once we started something like ... rejecting product it was kind of like shooting yourself in the foot type of thing, because we would just be bringing stuff back after we rejected it. And nobody would gain from that at all, especially our stores, which definitely would let us know that would be a problem,” said Gary Campisi, senior director of quality control.

Instead Walmart conducts monthly audits at its distribution centers to gauge how many suppliers are compliant. The retailer is currently working on improving the auditing process.

As suppliers worked to develop the required labels, Walmart's senior director of produce and floral, Mike Agostini — who is also co-chair of the PTI Leadership Council — answered questions via phone and email to help producers understand what the retailer wanted.

Walmart was initially worried that imported produce might lag the domestic side in compliance, but that wasn't the case.

“And they stayed right in sync with the domestic growers. So we ended up with a very robust label import program too for the most part,” said Agostini.

“Our trace back, even though it's not systematic, improved greatly, became faster, more accurate and more surgical, down to the level where we could identify products and pull only what was required to be pulled,” said Agostini.

One area where Walmart is running behind schedule is capturing outbound data from the labels as cases are sent to stores. In the past year, Walmart started an initiative at the corporate level to figure out how to track all of its products, from bicycles to apparel to food, and PTI was put on hold in order to determine how produce would fit into the bigger picture of traceability.