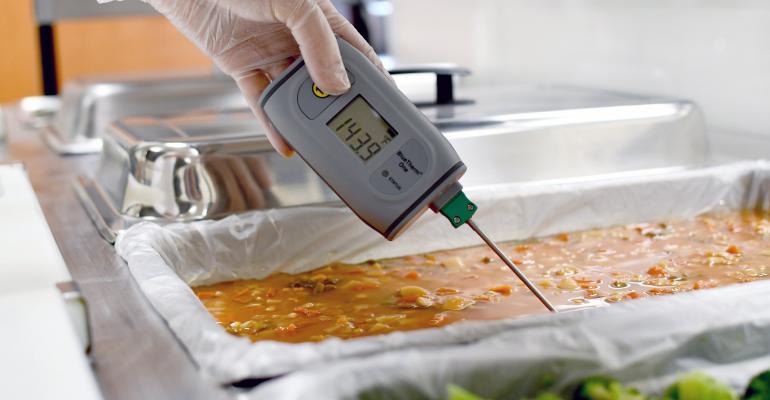 Supermarket operators face unique food-safety challenges that are in some ways even more complicated than those faced by traditional restaurants.

As retailers increasingly adopt a “grocerant” model that incorporates more prepared foods—from Hawaiian-style poke bars to made-to-order burgers and burritos—they are creating more opportunities for potential safety violations and the transmission of foodborne illnesses. These offerings, which can be significant drivers of revenues and profits, add significantly to the challenges retailers already face in maintaining proper temperatures in their refrigerated and frozen cases.

In fact, improper holding and cooking temperatures are among the leading risk factors for foodborne illness. Temperature issues are also among the leading reasons that retailers are cited for health-code violations. Other common reasons for violations are improper storage, personal hygiene issues (such as insufficient hand-washing) and cross-contamination.

Keeping food safe and avoiding costly health-code violations requires a rigorous temperature monitoring system, which can be made more efficient with technology such as the new DayMark Temp Monitoring and Food Checks Solution, which will soon be available to retailers.

FDA guidelines set the minimum storage temperature for hot foods stored on steam tables or other areas at 135 degrees Fahrenheit, while cold foods should be kept at 41 degrees Fahrenheit or lower. The harmful bacteria that can cause illness tend to thrive in the “danger zone” between those two thresholds.

“Temperature control is a strong defense against foodborne illness,” says one food-safety instructor.

Special attention must be paid not only to cooking and holding temperatures, but also to cooling cooked foods “Improper cooling is a leading contributor to foodborne illness,” he says.

Many states require that workers in prepared-foods departments possess at least some basic training in these and other food-safety procedures, such as proper sanitation of cooking utensils and food-storage practices.

Some states require that at least some staff at each location are trained in the comprehensive food-safety system known as Hazard Analysis Critical Control Points, or HACCP. It is a science-based approach to food safety that provides a universal set of standards that can be adapted for any establishment that prepares or processes food.

“The most basic concept underlying HACCP is that of prevention,” according to a guide to implementing a HACCP program in retail establishments published by the Association of Food and Drug Officials. “The objective is to make the product safely, and be able to prove that the product has been made safely.”

HACCP programs have long depended upon workers to perform tasks such as measuring temperatures at specified times and recording the results. This leaves the possibility of human error or other missteps that could occur in the often jumbled environment of retail prepared foods, where deli workers may be conducting a wide range of food-handling responsibilities. Technology is helping retailers get past that challenge, however.

The DayMark Temp Monitoring and Food Checks Solution, presented in partnership with JRI, provides temperature monitoring for refrigeration and line checks. The system helps enforce critical control limits, including proper refrigeration and cooking temperatures. Data is backed up to the cloud so that information is not only secure, but also accessible 24/7 from any location.

The solution is accessible in the prepared foods department via DayMark’s MenuPilot platform, at the corporate level via the MenuCommand portal or as a standalone product.

“Currently, staff are manually writing down refrigeration temperatures—multiple times per shift—or being sent out to the buffet to take the temperature of each dish to ensure health and safety standards are being met,” says Jill Carte, director of product development at DayMark Safety Systems. “With the DayMark system, small sensors—called Nanos—fit inside the refrigeration unit and communicate to a linked receiver outside of the freezer. The timing can be automated by the user, and checks can be scheduled every few hours—or as frequently as needed or wanted—and assigned to specific staff.”

A key advantage of such a system is that the documentation aspect of HAACP is also automated, she says. The DayMark system writes the information gathered from temperature checks to the cloud and maintains it on a dashboard.

“Operators no longer have to worry about mistakes or someone falsifying information,” says Carte.

With high employee turnover looming as an ever-present challenge in the retail industry, operators are increasingly seeking automated solutions that can shoulder some day-to-day responsibilities. Technology such as the DayMark Temp Monitoring and Food Checks Solution can help retailers refocus their labor on sales-driving initiatives, while also minimizing the time spent on training and re-training staff how to perform certain tasks.

“The market is demanding more automation for this type of tracking system,” says Carte. “It requires minimal staff training and allows for more efficient, accurate information despite high staff turnover.”