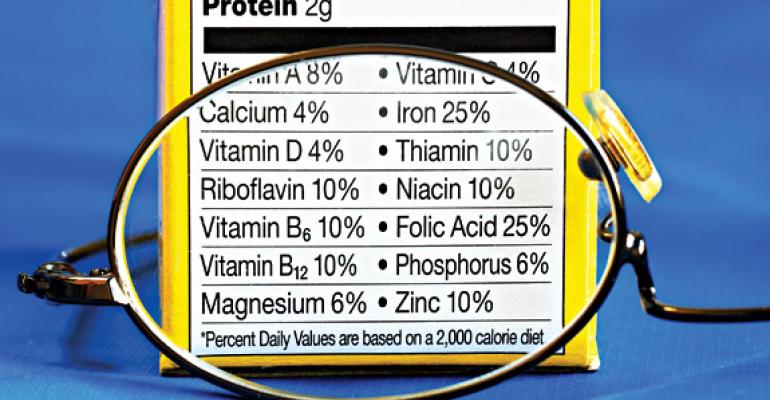 Food retailers continued to home in on health and wellness in 2011 by making nutrition rating systems available to all.

Shoppers filling a prescription in-store may have also noticed food merchandised in pharmacy as supermarkets paired food suggestions with specific disease states. In an even more personalized show of service, Bashas’ began printing customized food recommendations on the backs of prescription advisory sheets.

2011 may also be remembered as The Year of the Coupon. Redemption rates were on the rise, due in part to the “Extreme Couponing” reality show. But as viewers learned to match manufacturer coupons with items already on sale, Publix and Kroger set limits on the number of coupons that could be used in a single transaction.

Chains also presented shoppers with new ways to save. Big Y launched a fee-based loyalty club and the first Groupon deal and Safeway matched deals offered by competitors. Meanwhile, Stop & Shop went futuristic with its Scan It! mobile app, which rewards consumers for scanning groceries with personalized offers based on purchase history and location in the store.

Private label was also synonymous with savings, and not just for consumers. Retailers aimed to make the most of profits by consolidating banner brands under umbrella labels like Supervalu’s Everyday Essentials. A flair for promotion was also displayed during store-brand events like Safeway’s World’s Longest Picnic Table gathering.

Retailers broke with convention and made room for healthful foods in pharmacy and other new places in 2011. Shoppers who waited to have their prescriptions filled were the perfect subjects for lessons on foods that could help manage their specific disease state.

The personalization helped in-store pharmacies stand out at a time when large pharmacy benefit management companies like Medco and Express Scripts (ESI) planned to merge, and others formed partnerships with major drug chains.

Though reimbursements and gross profits for in-store pharmacies suffered, all was not rosy for the competition. Mail order prescription profitability for PBMs declined as the cost of postage increased. And when negotiations between Walgreens and ESI fell apart, almost 8,000 pharmacies were eliminated from PBM’s network. With no near term resolution in sight, Schnucks Pharmacies ramped up staff and services to meet the needs of displaced customers.

Retailers also supported health in parts of the store traditionally occupied by sugary snacks. Hy-Vee piloted checkouts stocked with foods consumed in so-called Blue Zones — places in the world where inhabitants are longest-living and happiest.

Launching the project was a challenge since contracts entitle certain brands to the space, but well worth the effort according to harried moms who didn’t mind their little ones asking for soy nuts, apples, oranges, carrots, yogurt and skim milk.

Voluntary guidelines for foods appropriate to market to children were debated by the Grocery Manufacturers Association and others who called for the Interagency Working Group on Food Marketed to Children to withdraw proposed principles that would limit marketing of some healthy foods like vegetable juices, soups and yogurt. GMA favored new guidelines from the Children’s Food and Beverage Advertising Initiative, a program of the Council of Better Business Bureaus. The standards that would take effect Jan. 1, 2014, establish specific limits for calories, saturated fat, trans fat, sodium and total sugars.

The Institute of Medicine’s Committee on Examination of Front-of-Package Nutrition Rating Systems and Symbols also favored a system based on zero to three nutritional rating points. It recommended a move away from “systems that mostly provide nutrition information without clear guidance about its healthfulness.”

GMA, who in concert with the Food Marketing Institute launched the Facts Up Front nutrition labeling system in January, maintained that consumers prefer to be equipped with nutritional facts so they can make their own decisions. GMA and FMI are planning a $50 million consumer education campaign for Facts Up Front. The system highlights calories, saturated fat, sodium and sugar per serving, daily value percentages for saturated fat and sodium, plus up to two icons showing “nutrients to be encouraged,” such as fiber and vitamins.

Coupon redemption grew in 2011 as consumers fulfilled more non-food coupons and offers conveniently presented in-store and at the shelf. But the group that gained notoriety was downright fanatic about these deals. Dubbed extreme couponers and featured on the “Extreme Couponing” reality show on TLC, these savers taught viewers to match manufacturer coupons with items already on sale. One cleverly obtained 150 Butterfinger candy bars for no cost by matching a store sale of two bars for $1 with manufacturer coupons for $1 off two.

While Kroger viewed its participation in the TV program as a positive way to highlight its values, Lowe’s Foods regretted allowing episodes to be shot at its locations. It claimed that producers staged scenes between the featured couponer and a member of the crew who posed as a disappointed shopper. Lowes declined to take part in additional tapings.

Others were critical of extreme couponing since it facilitates out-of-stocks. Publix Super Markets enacted its first coupon policy to set limits on the number of items shoppers could purchase using coupons and which competitor’s coupons it would match. Eventually Kroger also revised its coupon policy to prevent abuse. It stated that just five paper coupons could be used for the same product, and only two Internet coupons could be used in one day.

Safeway tested a discount program that matches the competition’s lowest price. Called “Deal Match” it allows shoppers to redeem deals offered by competing chains by uploading them to their Safeway loyalty card.

The Springfield, Mass.-based chain also dipped its toe in the Groupon waters in 2011 — the first supermarket to do so — with a deal that involved a private-label Shellfish Grill Pack, including lobster tails, mussels, clams and other seafood for $24, a 40% discount.

Then there were offers for those with GPS-enabled phones. Fresh & Easy rewarded shoppers for “checking- in” at its newest stores on Foursquare with coupons for free items, as did Hannaford Supermarkets in certain regions.

The technology also enabled Stop & Shop’s Scan It! mobile app which allows consumers to use their mobile device to scan, tally and bag groceries while they shop. The free app offers personalized and specific offers to shoppers based on purchase history and location in the store.

Amidst increased competition and commodity pressures, retailers approached private brands as a means for survival. Safeway did so by establishing a private-brand innovation model that borrows from national-brand developers and their focus on quality, while leveraging the assets that are unique to retailers. To help improve Americans’ overall perception of private labels, Safeway encouraged other retailers to do the same.

Private-brand marketers also consolidated corporate brands. Supervalu sought to leverage efficiencies by replacing its store-banner items with a national-brand-equivalent called Everyday Essential. And Delhaize America rolled out “My Essentials” to its Hannaford, Food Lion, Harvey’s, Bloom and Sweetbay banners. In an attempt to double its private-label sales, Walgreens began paring its 75 brands down to a few core lines. It added new brands such as “Nice!” and a no-name line that will be defined by its smiling sun imagery.

Retailers attempted to advance these brands in a number of new ways. Delhaize launched an employee-only contest designed to turn its store associates into brand ambassadors. As part of an attempt to familiarize them with store brands, it tied sweepstakes entries to the number of private labels purchased with a loyalty card. Despite $100,000 worth of prizes, the plan fell short of targets, according to officials.

Stop & Shop surprised shoppers who had private-label goods in their carts with a $5 gift card for each.

Other chains had outside bloggers review their store brands. The H.E. Butt Grocery Co. had its panel of 10 mom, coupon and other bloggers review its Orchid hand soaps, sanitizers and nail lacquer. While ShopRite created Potluck, a community of food enthusiasts who post recipes, reviews and cooking demonstrations using ShopRite private-label products.

Others inexpensively promoted their private brands by linking them to buzz-worthy events. Safeway caught the attention of media outlets with a Guinness World Record-setting promotion for its Open Nature line which featured the world’s longest picnic table. Loblaw Co. got attention for its President’s Choice brand through Recipe to Riches, a Canadian reality show where home cooks compete to have their recipes become a President’s Choice product. The program helped illustrate the care with which winners like Luscious Lemon Pudding Cakes were created.