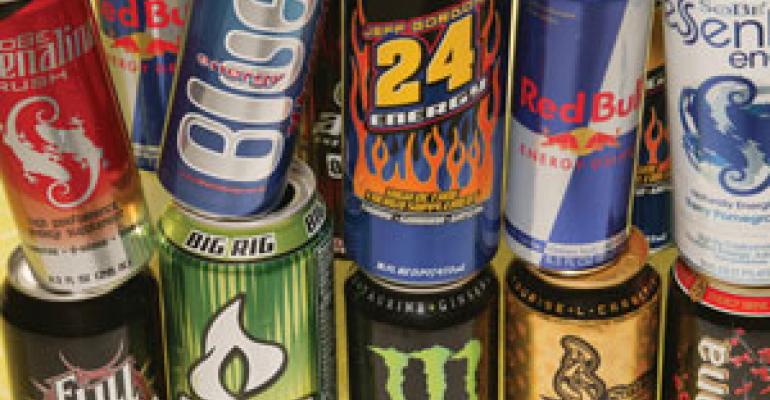 Buzz-enducing beverages present lucrative opportunities for supermarkets. But for many retailers, the energy drink deluge is amounting to caffeine overload. We are bombarded with new energy drinks all the time, and only a few of them are surviving, said Tom Winter, grocery director for Dorothy Lane Market, Springboro, Ohio. We barely have room for the top sellers like Red Bull or Monster. A few years

Buzz-enducing beverages present lucrative opportunities for supermarkets. But for many retailers, the energy drink deluge is amounting to caffeine overload.

“We are bombarded with new energy drinks all the time, and only a few of them are surviving,” said Tom Winter, grocery director for Dorothy Lane Market, Springboro, Ohio.

“We barely have room for the top sellers like Red Bull or Monster. A few years ago, this wasn't even a category, so now we're trying to figure out where to put the few brands that we carry.”

Solid sales increases of 20% or more, year after year, are spurring product introductions in one of the supermarket's fastest-growing categories. Sales of energy drinks in the channel rose 31% to $570 million during the 52 weeks ending June 17, according to Chicago-based Information Resources Inc.

Despite the influx of brands and limited shelf space, Winter isn't too charged up. Most of the upscale retailer's shoppers don't come in search of energy drinks, he said.

Instead, local consumers go to c-stores for these beverages.

“I've noticed that the energy drink sections there are enlarging to accommodate more variety,” Winter said. “It's not just the younger people who want them, it's truck drivers and delivery people who need a drink to keep them alert and awake.”

At Fresh Encounter stores, Findlay, Ohio, Red Bull continues to reign supreme, but the category is very fragmented there too, said Eric Anderson, senior vice president of marketing and advertising for the 30-store chain.

“There are too many energy drinks out there to name,” he said. “Every bottler is introducing their own energy drink. The teen and early 20s demographic are inhaling them.”

Fresh Encounter put shippers of energy drinks in high-traffic areas to encourage impulse purchases. Anderson noted that energy drinks also take up additional cooler space at the chain's stores during the summer months, but he attributes the change to direct-store-delivery vendors adjusting the mix in the cases.

“I predict that the category will always have a place,” said Anderson. “[Energy drinks] will not replace more traditional soft drinks, but will certainly add to the overall mix. We may begin seeing more organic versions and hybrid sports drinks.”

“Big categories like soft drinks are fighting for share with new categories,” he said. “With consumers, conventional category definition boundaries are blurring and shifting, because now they can find soft drinks with vitamins, beer with caffeine, and other new mixes.”

The targeted consumer has also changed. Not just for athletes anymore, energy drinks are now consumed by young people who want a hit of energy and those wanting to follow the latest trends.

“It isn't just 20-something guys consuming energy drinks anymore,” said Michelle Naughton, spokeswoman for Pepsi-Cola North America. “In fact, it's more like 60% male and 40% female. It's becoming more balanced, and people are drinking energy drinks at all times of the day, as a substitute for morning coffee or even as an afternoon pick-me-up.”

Pepsi chose to home in on NASCAR fans with its limited edition, orange/tangerine-flavored Jeff Gordon 24 Energy drink. The race car-inspired beverage was launched this spring and will be available for most of the summer.

Other well-known names include Rip It, BooKoo, Von Dutch, Wired, Fixx, Redline, Hype, Who's Your Daddy? and Vim & Vigor.

No retailer can possibly carry every brand and flavor, so some, like Dahl's Foods, Des Moines, Iowa, take a store-by-store approach to determine the product mix.

“Our store directors know the movement of their products, and we give them free rein to analyze the data they have at their fingertips to figure out what works best for their individual stores,” said Mark Brase, vice president of marketing for Dahl's.

Some Dahl's stores set up shippers and other stand-alone displays for new drinks. But more often than not, the bottles and cans are kept on the shelf, said Brase. Red Bull and Monster are the best sellers there, so they always have prominent placement, he added.

Boyer's Food Markets, Orwigsburg, Pa., has added an energy drink endcap to 15 of its 17 stores, said Anthony Gigliotti, vice president of sales and marketing. Most of the retailer's locations have also gained two front-end mini-coolers and an additional 4 feet of shelf space, both devoted to energy drinks.

These bigger cans are in high demand throughout the industry, said Gary Hemphill, managing director for Beverage Marketing, New York.

“I've seen some segmentation in terms of packaging, with 16-ounce cans becoming much more popular than the slim-line 8-ounce cans Red Bull originally marketed,” he said.

Other sizes are popular too. Red Bull was the first to introduce a 12-ounce can, hoping to attract more soda drinkers, said company spokeswoman Nyla Hassell.

“It's a potential entry point for new consumers migrating from carbonated soft drinks in search of premium products that energize,” she said. “Red Bull Energy Drink 12-ounce also attracts users who think 16 ounces is too much but want more than an 8-ounce functional energy drink. We've already seen evidence that the 12-ounce package is driving the energy drink category, as well as total Red Bull brand volume.”

Pepsi-Cola has done a wealth of research to determine what consumers want. The manufacturer discovered that bigger is indeed better.

“Current trends are leading to larger packaging, and other beverage companies are making them as well,” said Naughton.

While packages are getting bigger, some brands are offering slimmed-down versions of their original energy drinks. Coca-Cola introduced sugar-free Vault Zero in 2006.

“There have also been a lot of low-carb energy drinks entering the market in recent years,” said Hemphill.

Companies like Monster, Kronik and Unbound make low-carb products, and some, like Rockstar and XS, offer zero-carb energy beverages.

Carbonated beverage and refrigerated juice and drink purchases followed those of milk, which maintained its position as the most frequently shopped-for beverage.