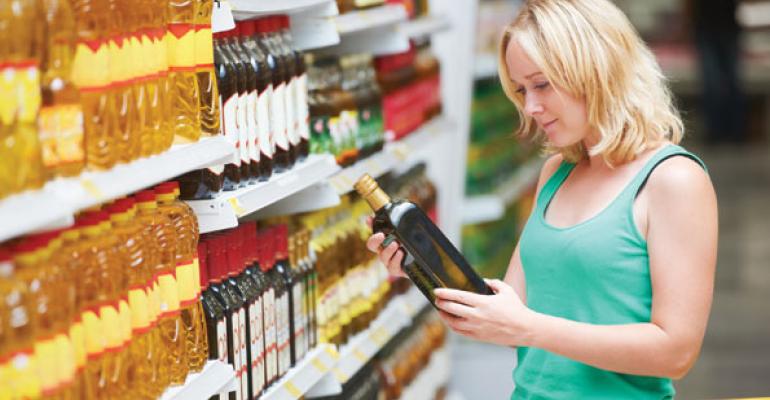 Private labels aren&rsquo;t as heavily discounted as they once were but consumers are buying more of them

The private-label price advantage may be waning, but not enough to dissuade Americans from making incremental purchases of house brands.

Retailers polled for SN’s ninth annual survey of Center Store performance acknowledged that store-brand price increases are outpacing those of national brands, with nearly half (48.1%) agreeing that the price gap has narrowed within the past 12 months.

One retailer attributed the change to “aggressive manufacturer spending to protect share.” But on the store-brand side, price increases are indicative of improved quality — 11.5% of retailers said that at least one of its private-label products is the most expensive item in its category, with one noting that heavily promoted national brands sometimes undercut corporate brands with temporary price reductions. “When purchasing national brands on deal, the cost can be less than the cost of private labels.”

Even retailers who stated that none of their private labels are the priciest in their category reported that some are priced comparably to national brands. “We have an expensive pasta sauce that is the same price as a boutique brand, but ours is outstanding,” said one respondent.

Despite the shrinking price differential, 73.1% of retailers related that private labels make up a larger portion of consumers’ shopping baskets vs. this time last year, while 25% said they make up the same portion.

Private-brand marketers hope to build on the momentum by appealing to Americans with more premium products.

Specialty categories, such as gluten-free, imported and local, are getting a lot of attention with 42.3% of retailers planning to add to or update their specialty private-label mix. Last month, Rochester, N.Y.-based Wegmans Food Markets debuted a store-brand line of gluten-free foods including corn-based pasta, and cookie, brownie and cake baking mixes.

More than one-third of private-brand marketers (34.6%) will add new product innovations to their portfolios within the next year, followed by natural and organics (30.8%), ethnic offerings (25%) and healthy reformulations (23.1%).

Nearly one in 10 (9.6%) will get into an entirely new private-label category. “We’ll be adding many new categories — beer being one of them,” said one respondent.

Retailers are venturing into segments traditionally dominated by national brands, in part, to protect channel share, with respondents ranking private label (34.6%) and price (34.6%) as the most popular strategies for fighting Wal-Mart and other competitors for Center Store sales.

“If I match or beat Wal-Mart’s price on anything, I have trouble keeping it on the shelf,” stated one retailer. Another endeavors to improve its price image with bare-bones merchandising schemes: “We can get bargains on soft drinks, make a display and sell it at a rock-bottom price warm, to save on labor and refrigeration.”

Though Wal-Mart’s influence is evident in both strategies, respondents are less concerned with the mega-retailer than in previous years. Just over one-third (34%) reported that Wal-Mart was the alternate channel that posed the biggest competitive threat vs. nearly double that — 64% — in 2009.

Rather than fend off competition from a single player, supermarkets have developed varied strategies to fit emerging channels such as dollar stores, which posed the biggest threat to 22.6% of retailers, up from 17% the previous year. Just over one in 10 (11.9%) were most threatened by club formats, down from 15.1% last year.

Within their own four walls, food retailers are  jazzing up their product mix, reorganizing grocery aisles and even relocating items to perimeter departments to revitalize Center Store sales.

The most popular means for adding life to the department is with new product innovations. While category buyers troll for innovations, their manufacturer trading partners are busy creating them with 56.6% of food retailers and 70% of manufacturers focusing on the latest and greatest products.

Another popular strategy involves moving foods once merchandised inline with other shelf-stable products beside complementary fare in fresh food departments, said 50.9% of retailers and 35% of manufacturers.

The reorganization of aisles based on meal occasions is also taking place, said 43.4% of retailers and 10% of manufacturers. More than one-quarter of  retailers (28.3%) and three in 10 manufacturers host recipe demos to boost sales.

As Americans become more cognizant of diet’s relationship to health, supermarkets are assisting them in striking the most efficient balance of calories in and calories out. During the next year, retailers will boost their wellness positioning with nutrition shelf tags/signage (67.3%), by updating their assortment (42.3%), providing access to a dietitian (19.2%), with in-store lectures and store tours (15.4%), fee-based wellness programs (5.8%) and nutrition and exercise programs (3.8%).

Nearly 80% also plan to expand their ethnic marketing reach with six in 10 (61.5%) doing so with an increased product assortment, by participating in community events (17.3%), launching a private label (17.3%), hosting demos featuring ethnic meals (17.3%), adding bilingual communications/employees (7.7%) and opening a new location under an ethnic format (5.8%).

While retailers (73.1%) and suppliers (67.5%) are on the same page with plans to increase their shopper marketing investment in the next year, there’s variance regarding the groups they’ll most heavily target. Females will be the focus of 19.6% of retailers and 41% of manufacturers, while just under one in 10 retailers (9.8%) will zero in on Millennial shoppers vs. 15.4% of manufacturers. Interest in Baby Boomers is reversed, with 15.7% of retailers targeting the age group compared to just 7.7% of suppliers. And a higher percentage of food retailers (13.7%) than manufacturers (7.7%) will set their sights  on Hispanic consumers.

Shoppers, meanwhile, have a different set of priorities largely rooted in cost savings. The most popular means for saving money on groceries has been stocking up on sale items according to 61.5% of retailers, down from 63.5% in 2011.

The majority of supermarkets (86.3%) will rely on tried and true marketing tactics like traditional advertising to promote private labels within the next year, while just over one-quarter (25.5%) will host Facebook contests, Twitter promotions (13.7%), use internal bloggers (9.8%), tie product development to a contest (7.8%) and recruit outside bloggers to share their opinions of brands (7.8%).

Among the social media sites at their disposal, half of retailers (51%) agree that Facebook has been most effective for promoting Center Store items, followed by Twitter (10.2%), a corporate blog (8.2%), Groupon (2%) and Foursquare (2%).

More than one in five retailers (22.4%) don’t use social media but many are enhancing the in-store experience for users of mobile devices.

Nearly 60% of retailers polled by SN host a mobile website, 34% use QR codes, 29.8% push text message offers, 27.7% have a store-specific mobile app and 6.4% use near-field communication.

HOW WE DID IT: SN’s Center Store survey was conducted April 30-May 21. It was emailed to SN’s print subscribers and to recipients of SN’s daily e-newsletter. SN received 136 completed surveys with responses from 54 food retailers, 19 food wholesalers, 41 manufacturers and 22 other respondents.

Click on the image for a larger pdf version. 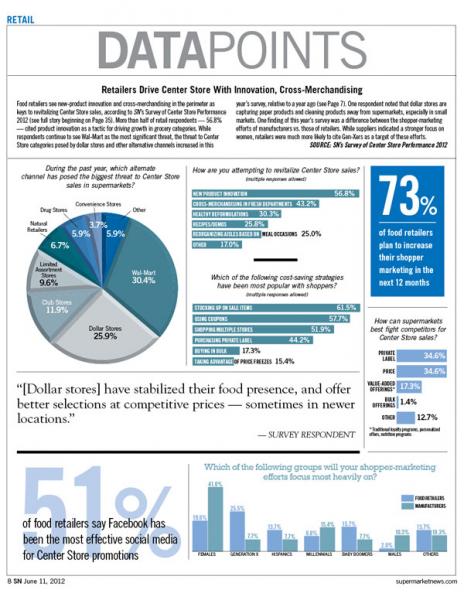 From Wal-Mart to Dollar Stores, Changing Perceptions About The Most-Feared Retail Competitors
Jun 16, 2012