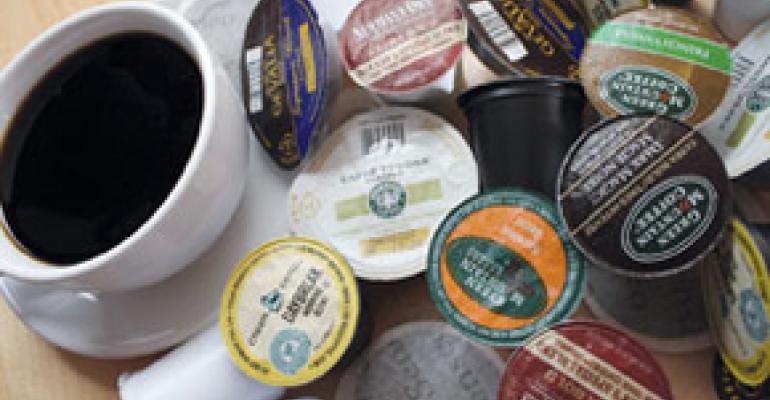 Daily consumption of gourmet coffee beverages has jumped to an all-time high, with 17% of the overall adult population partaking, according to the findings of the New York-based National Coffee Association's 2008 National Coffee Drinking Trends survey. The unprecedented popularity of premium coffee comes at an unlikely time, when consumers are scaling back on their away-from-home eating purchases.

Daily consumption of gourmet coffee beverages has jumped to an all-time high, with 17% of the overall adult population partaking, according to the findings of the New York-based National Coffee Association's 2008 National Coffee Drinking Trends survey.

The unprecedented popularity of premium coffee comes at an unlikely time, when consumers are scaling back on their away-from-home eating purchases.

Most penny-pinchers' $4-a-day java fix has been first on the chopping block. These consumers are forgoing daily trips to coffee house chains, opting instead for freshly brewed coffee that can be made at home for less than $1. Cognizant of the trend, retailers are helping ease their transition.

Many have added super-premium coffee facings, and single-cup brewing systems and corresponding coffee capsules to their planograms. Some chains are even redesigning their aisles to create an upscale destination modeled after the sights, smell and feel of a Starbucks coffeehouse.

“We've almost made the aisle a destination-type thing,” he said.

Among Eichorn's current considerations are whether to expand the 16 feet of space dedicated to coffee capsules that are compatible with one of the two single-cup brewers Big Y sells from its general merchandise area. Eichorn also must decide whether the Keurig Classic Brewers and the Senseo single-cup brewing machines are better suited for the coffee aisle, where they could be positioned beside capsules.

“We've thought about it, and it may happen,” he said.

Although the strategy could help educate shoppers who are unfamiliar with the “closed” system brewers (only certain types of capsules can be used with certain machines), Big Y has helped uncover much of the mystery with annual holiday promotions.

For the past two winter holiday seasons, Big Y merchandised the Keurig machines and boxes of the corresponding K-cups on freestanding displays positioned in the store's perimeter.

Discounts on the Keurig brewers have been tied to Big Y's Express Rewards Coin system, whereby shoppers are surprised at checkout with either a silver, red, blue or gold coin, depending on how regularly they shop with the retailer. As part of the tiered loyalty program, coins can be exchanged for different levels of discount on specific items.

Although the machine regularly sells for $99.99, consumers possessing the most valuable coin were able to purchase it for $59.99.

“Every year we do this promotion it grows more and more, and then the owners come back for the pods,” said Eichorn, referring to best-selling Green Mountain Coffee K-cups. Twelve-packs retail for $7.49, and are sometimes promoted at $5.99.

Big Y sold almost three times as many Keurig machines during its 2008 promotion as it did the previous year. In fact, the chain had to continually order more brewers to keep up with demand.

Changes are also afoot at Meijer. As part of an expansive project, the Grand Rapids, Mich.-based chain has undergone coffee aisle redesigns in 26 stores during the past 18 months, according to Mike Mikyska, vice president of business development for Display Boys. The Santa Ana, Calif.-based company has executed the Meijer redesign, and similar projects for chains like Wegmans, Giant Eagle and Hannaford Bros.

Such initiatives are the beneficiary of increased investment, as retailers aim to influence purchase decisions at the point of sale, observed Win Weber, chairman and chief executive officer of retail consultancy Winston Weber & Associates, Memphis, Tenn. “The store environment today is a primary demand generator so most retailers are focusing on enhancing that shopping experience,” he said.

Supermarkets interested in coffee aisle transformations have both category management and aesthetics in mind.

“The main thing is making sure the right product mixes are on the shelf … but it's also getting that consumer down the Center Store aisle,” Mikyska said.

As part of its effort to transform coffee aisles into upscale destinations, Display Boys positions bulk coffee near the perimeter so that shoppers will be drawn by its smell; installs special lighting and black shelving; and adds a header system that features educational messaging. Refrigerated cases are also incorporated.

“The whole mood of the aisle is that Starbucks coffeehouse feel,” Mikyska said.

Since configurations are based on available space, they can vary within a chain. In Meijer's larger locations, Display Boys reinvented 120 feet of aisle space. The retailer didn't return SN's request for comment.

“It's a two-sided aisle with an island in between, and that's where the [single-cup] brewers and pods are,” Mikyska said. About 12 feet of space on these islands is dedicated to the brewers and pods. Islands also hold filters and other specialty coffees.

Although Mikyska could not provide information related to how significant an impact these redesigns have had on sales, Weber has conducted in-store tests of aisles featuring improved signage and shelf layout.

“From time to time we launch new Nabisco cookies, such as our new Oreo Cakesters, where we would conduct a more comprehensive demo which [also] includes the Tassimo brewing system and our line of hot beverages and patented T Discs,” Belacastro said.

“People want that coffeehouse quality and experience at home,” said Alice Millincamp, customer sales manager of Tassimo, Kraft. “You can make it at home, probably for around $1 a cup.”

Keurig recommends that grocers merchandise its Keurig Classic Brewers alongside the K-cups that are used with the system. There are currently more than 200 varieties of 13 brands of K-cups, including Newman's Own Organic, Celestial Seasonings Tea and Caribou coffee.

“We are the share leader in the grocery channel,” TJ Whalen, vice president of marketing for Green Mountain Coffee, told SN.

Dollar sales of beer were up across all channels during the most recent winter holiday period, compared with the previous year's.

TAGS: Product Categories
Read This Next