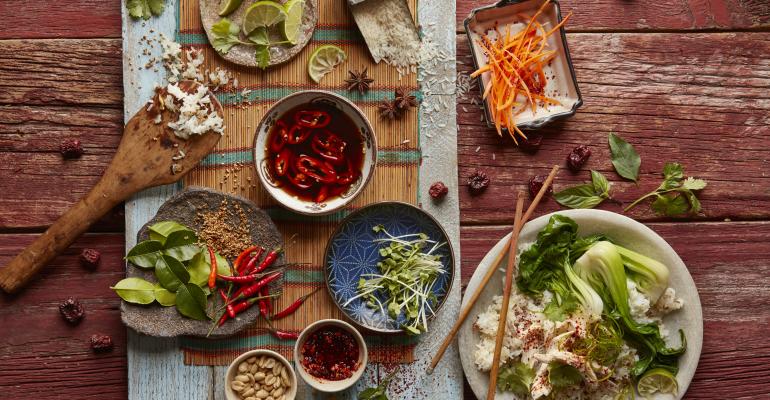 Consumers want multicultural products. And the sales reflect that.

The consumer quest for globally inspired culinary adventures continues to influence product assortments in center store, from shelf-stable sauces and spices to frozen appetizers and meals.

Generation Z and Millennials are not only the most ethnically diverse generations in terms of their own cultural backgrounds, but they also have very diverse palates, said Rachel Shemirani, senior VP at Barons Market, a regional chain based in Poway, Calif.

“When they are eating out at restaurants, it’s not just Mexican or Italian or American anymore—It’s Vietnamese, Korean, all kinds of Middle Eastern, Ethiopian—it’s a much more cultured palate,” she said.

Interest from consumers in multicultural foods is increasingly driven not only by restaurant experiences, but also by social media like Instagram and TikTok, Shemirani said.

“With social media now, people are already familiar with the product, and they know how to use it,” she said. “It’s just a matter of going to the local grocery store and finding it.”

Korean sauces have been especially popular at Barons, as have some African flavors, including harissa. Locally-made tortillas and salsas are also very popular at the Southern California retailer, Shemirani added.

Charlotte Myer, VP of merchandising at New York-based online grocer FreshDirect, said her customers have been particularly interested in Sichuan and Korean flavors, with sales of Sichuan chili crisp and gochujang sauce both gaining sales in the past year, compared with a year ago.

In fact, Myer said FreshDirect plans to expand its selection in both Sichuan and Korean flavors in the coming months.

She cited increasing consumer demand for a variety of multicultural, shelf-stable sauces, including products from Hillside Harvest, Fly by Jing, New York Shuk, and Mina.

“From Sichuan to Moroccan-inspired sauces, there is a consistent trend of consumers buying a diverse array of sauces to use in various at-home recipes–a mode of culinary tourism that they can enjoy from the comforts of their own kitchen,” said Myer.

Brooklyn Delhi, for example, offers ready-made sauces that enable consumers to create dishes such as tikka masala or vindaloo, while noodle kits from Momofuku, which include noodles and a sauce packet, are another standout.

Fly by Jing’s chili crisp and its other sauces have been especially popular, Myer said.

“They have been one of the most successful new brands that we’ve launched recently and are already one of the top performers in the category,” Myer said. “Their umami-rich sweet, tangy flavor draws inspiration from the hole-in-the-wall restaurants that dot the streets of Chengdu, the founder, Jing’s, hometown.”

“We are seeing more and more product innovation inspired by Caribbean flavors and are looking to build out our selection in these areas as well,” Myer said.

Frozen heat-and-eat meals from a variety of global cuisines have also been performing well at Barons, Shemirani said, noting that the retailer is considering adding even more of these items to its assortments.

Data from Nielsen show that several categories of multicultural foods have shown strong dollar sales gains in the past year. Frozen appetizers such as taquitos and wontons were both up in double digits — 19.9% and 38.2%, respectively — for the 52 weeks ending Oct. 29, compared with a year ago, across all food retail segments.

Frozen Latino handheld entrees showed similar gains, with dollar sales of burritos up 14.7% and empanadas up 29.7%.

In the Mexican shelf-stable categories, staple products such as spices and seasonings, condiments, sparkling water, and beans and rice dominate dollar sales volumes, according to Lynda Glass, category manager of kosher, Mexican, Hispanic and Caribbean foods at distributor KeHE.

“Sales for the Asian category at KeHE are outpacing the market, and we are seeing continued high demand for Asian products,” said Morgan Lee, KeHE’s category manager of Asian, Indian, Thai, frozen Asian, and rice prepared.

Lee said health and wellness are key drivers in many Asian food categories, citing research from Mintel showing that 42% of consumers associate Asian foods with healthfulness.

One of the longstanding questions surrounding the merchandising of multicultural products is whether or not to integrate them into the mainstream assortments, or to maintain a separate “international aisle.”

Both Lee and Glass said it’s up to individual retailers to determine whether or not to segregate multicultural foods.

“It depends greatly on the retailer intention for the category,” said Glass. “In other words, who is the target consumer for the retailer, and how broad or narrow they wish to be.”

Lee agreed, but added that having a “global” section in the store, with multicultural adjacencies, can simplify the consumer experience by creating a one-stop-shop for all their ingredient needs.

“We don’t need a special section in the store for these items,” she said. “People are now used to seeing Korean barbecue sauces next to American barbecue sauces, and it works great for the customer.”