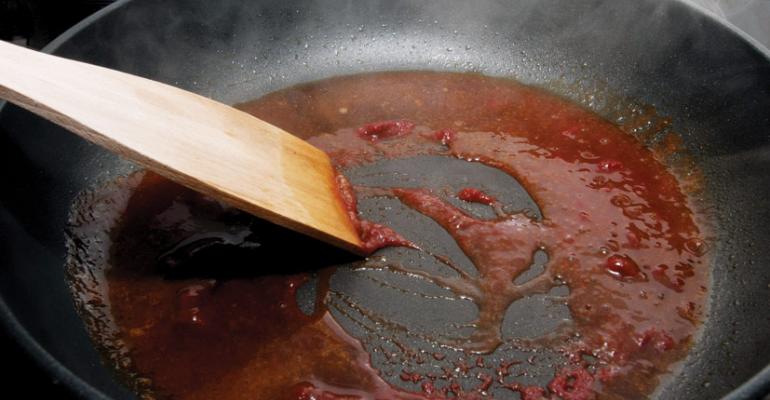 Convenience-craving consumers demand products that make meal preparation quick and easy. In response, supermarkets are stocking up on simmer sauces, spice packs and other step-saving stir-ins that can be added to proteins and vegetables to create a complete, home-cooked meal.

“Shoppers are looking for sauces, soup packets and other items that can be thrown together and cooked with minimal prep time, often in Crock-Pots,” said Brous. “Shelf-stable products are by far the most popular. We had been selling finishing sauces by Kraft and Philadelphia in the dairy case too, but these are being discontinued.”

Most shoppers, she said, inherently head toward  Center Store for sauces, not the dairy case. As a result, too many chilled items reached their sell-by dates while still in stores to warrant keeping them in stock.

Each of Highland Park Market’s five upscale locations carries meal starters. Campbell’s Slow Cooker Sauces in flavors like Tavern Style Pot Roast with Mushrooms and Roasted Garlic, and Hawaiian Luau with Pineapple, Mango and Bell Peppers are among them.

However, this category hasn’t taken off with the retailer’s customer base, regardless of brand, and this is attributed to the particular convenience needs of that company’s shopper base, said Tim Cummiskey, grocery manager for the Connecticut chain’s Glastonbury store.

“We started carrying these products toward the beginning of 2012, but they still haven’t really caught on with our customers,” he said. “Convenience is a bigger deal in markets where the people who cook the family meals also have jobs. Our core shopper is an affluent stay-at-home-mom or wife who has the time to cook, so she isn’t as interested in convenience-based items.

"It isn’t enough to stock a selection of the latest or most popular introductions in this category, said Brett Bremser, VP of center store for Hy-Vee, West Des Moines, Iowa. Supermarkets must also market them to shoppers.

“These products represent a relatively new category so we have to work hard to get consumers to see the convenience and try the products,” said Bremser during an SN webinar last year. “That means getting them shelved in the right place.”

Rather than stocking meal starters by brand family, Hy-Vee has dedicated sections for them. The chain also cross-merchandises shelf-stable meal kits, like Kraft Recipe Makers for New England Pot Roast, alongside fresh meal components like beef chuck roast, red potatoes, baby carrots and onions, in multiple areas of the store.

“Having multiple touchpoints, like in the produce section, for instance, will help customers understand they need to add meat to the product,” Bremser said.

SN INSIGHT
Adventurous cooking sauces are adding international flair to home chefs’ repertoire. Retailers who want to capitalize on the trend a la Publix Super Markets with its Apron Simple Recipe program should consider the global flavors influencing U.S. dining trends. Among them:

“Retailers should use the retail merchandising recommendations of CPG companies and in-store signage and the fixture packages they offer with the overriding message of ‘Simple Meals Made Easy,’” he said. “Ideally, they should also put convenience meal items together at the front of the store so busy consumers can stop on the way home, get inspired and provisioned, and get on their way.”

A display of slow cooker sauces is a viable option since the cookers have recently reemerged as the go-to appliance for preparing quick, easy meals with a homemade feel, he added.

“We know that slow cooker use is on the rise, yet consumers can feel stuck using them for the same dishes again and again,” said Dale Clemiss, VP of simple meals for Campbell North America. “Our new line of Campbell’s Slow Cooker Sauces help enhance the slow cooker experience, and help busy cooks create delicious meals for their families, even on hectic nights.”

The key to selling more of these products is touching on as many consumer trends as possible and merchandising them in every area of the store that makes sense, said Jo Lee, VP of strategic insights at The Hartman Group, Bellevue, Wash.

“Savvy retailers are integrating store-made meal kits and [manufacturer-made] meal starters,” said Lee. “They are placed in the perimeter of the store in produce, meats, cheese and the grab-and-go prepared food section.”

When coolers are not an option, retailers can set up displays with nonperishables like Tyson’s Slow Cooker Stew Kits and Slow Cooker Gourmet dinner kits, added Lee.

Publix takes its promotion of such products a step further. As part of its Apron Simple Recipes program, meals are cooked and sampled in-store. Then, recipe cards are handed out and shoppers are pointed to displays stocked with every ingredient in the recipe.

“We incorporate simmering or finishing sauces into our Apron Simple Recipes when they are on sale in our weekly circular,” said Brous. “We plan months ahead to aim to select the items that will be on sale and ensuring that the recipes are easy and convenient, can be cooked in 30 minutes or less, are low cost and showcase the popular flavor profiles of the moment.”

According to McCormick & Co. and its “Flavors and Food Trends for 2014” report, global flavors are hot and expected to remain that way in the near future. The most popular include a Peruvian yellow pepper called “aji Amarillo,” Mexican chamoy sauce, Kashmiri masala, Brazilian cassava flour and tea.