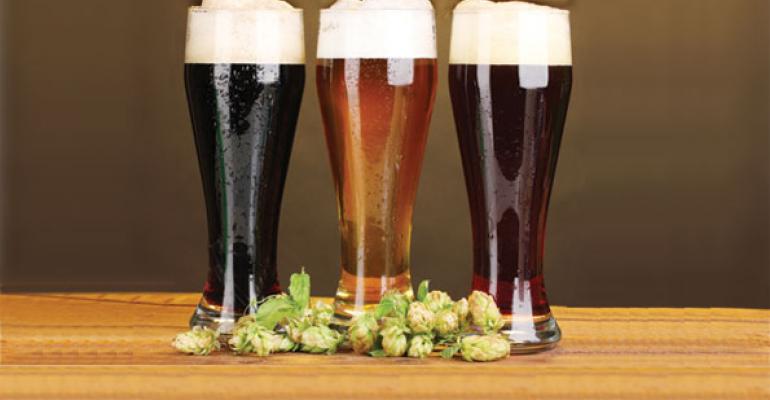 Craft Beer: Top of the Hops

With an emphasis on local brews, seasonal styles and variety packs, retailers are getting crafty with their beer sets

At Hiller’s Market in Southfield, Mich., adherence to the tagline “everyday to gourmet” is evident in sets where bottles of Bud keep company with brews like Short’s über Guber Oatmeal Stout.

Considered a “gift from heaven” by one craft enthusiast, the aromatic winter beer with a handful of peanuts in every bottle is just one intoxicant building excitement in a section comprising every Michigan craft brand available for retail distribution.

“One of my approaches in the category is to be first to market with emerging trends,” Ken McClure chief of operations for the seven-store family-owned independent, told SN.

That’s becoming a taller order now that traditional food retailers and even Wal-Mart Stores are forging ahead into the high-end beer space.

Last year, grocery retailers expanded their assortment of beer and malt-based beverages by 9.5 items on average, with seven of the additions being crafts, according to Nielsen.

The statistic isn’t exactly a revelation at a time when beers from small domestic brewers priced above $26 per case cast a bright light on an otherwise lackluster space.

While overall beer sales remained flat in 2011 with dollar sales up 1% and case sales down close to 2% in supermarkets, crafts posted their sixth consecutive year of double digit growth, with dollar sales spiking

15% and volume sales up 12.6% vs. the previous year, according to SymphonyIRI Group.

Food retailers are becoming more ensconced in the segment at a time when major players are tapping into upscale brews. 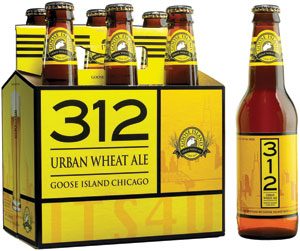 The moves are designed to cater to eclectic beer tastes.

MillerCoors, with Blue Moon and Leinkugel’s in its portfolio, is likewise ramping up investment in the space. In 2011, it created the Tenth and Blake Beer Co. — a craft and import division — to capitalize premium brews. Tenth and Blake has a minority stake in Terrapin Beer Co., and earlier this month acquired the Crispin Cider Co.

In the five years since South Carolina “popped” the 6.5% alcohol by volume cap on beverages to allow for drinks with up to 17.5% volume, Piggly Wiggly Carolina Co. has grown its specialty, import and microbrew mix at the expense of mainstream domestics.

So that it will be considered to distribute hard to find beers, Piggly Wiggly keeps close relationships with wholesalers and emphasizes local small batch brews.

Charleston-area specialties from Coast Brewing, Westbrook Brewing, Thomas Creek Brewery and others are merchandised side by side and will soon be identified with special signs.

Together these segments hold roughly 30% share of total craft volume. Variety packs grew 19% in 2011 vs. 2010, according to Andrea Riberi, senior vice president of Nielsen’s Beer Group.

Craft multipacks are on the upswing across the board, with stronger growth in 12-packs than 6-packs. Larger packs can be purchased from $12 to $18 at Piggly Wiggly.

Indeed, these styles and forms are popular since they appeal to craft fans’ sense of adventure.

“That’s one of the biggest characteristics of craft beer drinkers; they’re open to trying everything and anything they can get their hands on,” Long said.

Since innovation is the hallmark of craft breweries, there is a plethora of beer types from which to choose.

“These breweries show extreme ingenuity with styles and ingredients from chocolate to coffee to barrel aging in bourbon and wine barrels,” Long said. “Consumers aren’t afraid to try anything.”

With close relationships with distributors, local brewers and an authorization cycle that allows for product approval in under seven days, Hiller’s mix of mainstream domestics, imaginative crafts and high-end imports is hard to beat.

“We have one of the best beer selections in Michigan,” noted McClure.

Top-selling craft brands include Sam Adams, Sierra Nevada, Michigan-based Bell’s Brewery and Founders Brewing Co., with much of the growth coming from styles and forms that play to craft consumers’ experimental nature.

The popularity of “over the top” hoppy beers, like double Indian Pale Ales: Bell’s Hopslam Ale and Founder’s Double Trouble, is indication that craft enthusiasts have developed more sophisticated palates and are seeking bolder tastes than in the past.

Hops contribute to a beer’s flavor and aroma, with the acids contained in hop flowers giving beer its bitterness.

IPAs and other styles that are high in hops command slightly more than 20% share of craft beers, and posted the most significant growth in the space at 19.7% during 2011, said Riberi.

The acidic and tart taste profile that is characteristic of sour beers is also gaining appeal. So much so that McClure has scheduled a tasting to introduce his beer buyers to some of the variants of sour brews.

“They’re my beer mavens and I bring them into the office several times a year for tastings and educational seminars,” McClure explained.

Training is even more important now that a new law has made in-store sampling of beer, wine and spirits permissible in Michigan.

Hiller’s samples about two beer products each week, and limits tasting stations to one per store. Associates check an individual’s license and write down their name to ensure they haven’t exceeded their three pour per limit.

With the average sampling event boosting sales about 500%, tastings have been a boon to Hiller’s.

“Perhaps you’re selling one case of beer on a Saturday during a particular four-hour period. If you have a sample going for that same four-hour period you might sell five, six or 10 cases of that product,” McClure said.

Sampling draws new consumers, like those who are partial to wine. Given the crossover appeal of these beverages, A-B suggests that that retailers merchandise craft beer in the wine section.

“The craft and wine customer are closely aligned,” Potthoff explained. “Making craft available in the wine section allows the retailer to capture a ‘plus one’ purchase occasion.”

At Hiller’s, the ability to try before you buy helps shoppers know exactly what they’re getting before paying a premium.

Costs are justified since brewers use the highest quality ingredients and sometimes even farm their own hops, according to McClure.

“These are beers brewed in small batches and with great personal care; there is no factory turning out Michigan craft beer,” he said.

Hard cider enthusiasts are abuzz with the news that major brands are moving in on the small but fast-growing beer space.

Cider sales were up 22.5% in supermarkets during the 52 weeks ending July 10, 2011, according to SymphonyIRI Group.

Though ciders account for a small portion of sales, plays by America’s two largest brewers will undoubtedly sweeten the space. 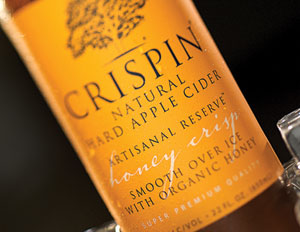 Like beer and wine, there are numerous styles of cider, with different techniques, varieties, orchard conditions and other ingredients affecting the taste.

Varying in alcohol content from 2% to 8.5%, fermented beverages made from apple juice have a burgeoning fan base in female drinkers and members of the Millennial generation, said Dan Wandel, SymphonyIRI’s senior vice president of beer, wine and spirits.

Among them is Ken McClure, chief of operations for seven-store Hiller’s Market in Southfield, Mich. He’s partial to a cider from the old gold mining town of Julian, Calif.

“Julian Ciders is one of my recent addictions,” he said. “It’s really, really good.”

The trend is also in full swing at Piggly Wiggly Carolina Co. where Woodchuck Hard Cider from Middlebury, Vt. leads the category.

Hoppy craft styles like Indian Pale Ales are on an upward trajectory with sales rising nearly 20% in 2011, according to the Nielsen Co.

Replacing Pale Ales as the go-to craft, its popularity is indication that consumers are developing more sophisticated palates and seeking bolder tastes.

But an IPA is not the best gateway brew for someone new to crafts.

At least that was the consensus at the Charleston, S.C.–based Piggly Wiggly Carolina Co. when it set out to create its Pig Swig line with the nearby Thomas Creek Brewery.

“We’ve talked about moving in that direction but the idea of Pig Swig is a craft beer that was approachable and if you’re not used to a big, hoppy, in your face-type beer you can get turned off pretty quickly,” explained Nick Long, beer and wine category manager for the Piggly Wiggly Carolina Co.

Pig Swig brand Pig Tail Ale and Pig Pen Pilsner, were welcomed by delighted consumers last May. The Pilsner style is most popular and one of Piggly Wiggly’s top five selling crafts.

“The logo and name are so recognizable so to be able to play off of that is a lot of fun,” said Long.

The retailer most recently introduced Seven Swines ‘A Swigging Ale, a limited-edition holiday brew, and new seasonals are planned for summer and fall.