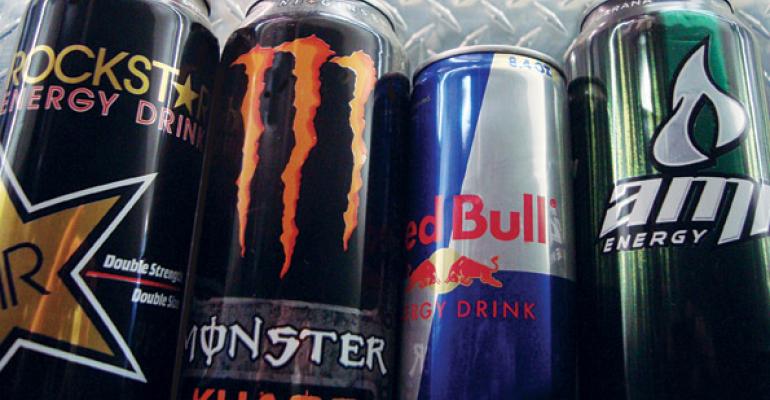 While other beverages have flat to declining sales, energy drinks are up in the double digits

Both energy drinks and energy shots are posting double-digit sales growth. Energy drink dollar sales : grew 12% to $783.6 million in food stores, while shots soared 41% to $84.8 million for the 52 weeks ending Dec. 25, compared to the prior year.

Indeed, energy drinks claimed a 57% category share of the energy drink/sports drink/functional waters category in 2010, up from a 42% share in 2006, according to research firm Packaged Facts, based on Experian Simmons data. It was the only category among the three that did not post sales losses over the period.

Adult usage rates of energy drinks increased from 14% in 2006 to 16% in 2010. Impressive performance considering it was a recessionary time that led to decreased usage rates for most convenience ready-to-drink product segments in the functional and natural beverage market, according to Packaged Facts.

While it seems counterintuitive for consumers to buy high-priced beverages during tough economic times, shoppers may feel the cost is justified.

“The success of the category proves that consumers will spend a bit more for functional benefits,” Hemphill said.

Since virtually everyone feels they can use a pick me up during the day, the category has wide appeal.

“The need-state itself is large,” said Hemphill.

As a result, it predicts that both energy drinks and energy shots will continue to thrive despite higher price points.

Convenience stores are the leading channel for the energy drinks/sports drinks/functional waters category, according to Packaged Facts estimates. C-stores account for half of overall sales.  Supermarkets and mass merchandisers/supercenters each account for about 19% of sales.

Convenience stores are the leading channel largely because consumers may balk at spending up to $6.99 for a multipack at a supermarket when they can get a single-serve can at a convenience store for a lot less.

“Since energy drinks are fairly pricey, consumers may opt to buy a single can, rather than a multipack,” Hemphill said.

Coolers holding single-serve cans of Rockstar, Monster and other energy drinks are merchandised near the checkout of about half of Niemann Foods’ 40 County Market and Cub Food supermarkets, according to Martin Miller, category manager.

Niemann also sells plenty of single-serve warm cans right off the shelf. Single-serve retails range from 99 cents to $2.99 for a 16-ounce can, depending on the brand.

Niemann merchandises energy drinks in a 4-foot section next to New Age beverages like ready-to-drink teas.

Energy drinks continue to challenge established categories like carbonated soft drinks. While CSD sales are flat, energy drinks are up about 10%.

“It’s a key category for us because of its growth,” Miller said.

The one hurdle is the relative high price point. Niemann addresses this with frequent promotions. It sometimes features Red Bull for $4.99 or $5.99, down from the regular $6.99.

“We have a pretty good ad schedule to drive consumers to the category,” Martin said.

Men continue to be the primary consumers of energy drinks. About 20% of all men aged 18 and older report drinking energy drinks in 2010, compared to only 12% of all women, according to Mintel. Marketing efforts of most energy drink brands remain focused on extreme sports that are more likely to appeal to men.

But new low-calorie and sugar-free options attract female consumers. Monster, for instance, has a variety of “Monster Rehab” tea/lemonade/energy drinks that have helped attract new consumers.

Rockstar has even launched a Rockstar Pink, a carbonated energy drink marketed in a pink can, to appeal to women.

The category is not without controversy. There’s been frequent coverage of research linking overconsumption of energy drinks — and the caffeine contained in them — with negative health effects, among teens and tweens.

Along with the added caffeine, energy drinks typically contain other compounds that are also high in caffeine, such as guarana, yerba mate and cocoa.

Canada took action with a proposal to regulate energy drinks as foods, rather than natural health beverages. Under the plan, energy drink labels would have to display the same kind of nutritional and ingredient information as found on food packaging.

Caffeine will be limited to 180 milligrams in a single serving, a level comparable to the amount in a medium cup of coffee. (The limit is high enough that it will not make a difference for many energy drinks.)

The government will also require that the total amount of caffeine to be clearly printed on the label.

Canadians will also be able to look for clear warnings on the label. These include messages warning consumers not to mix energy drinks with alcohol, as well as advisories for higher-risk groups, like children and pregnant women.

“These new measures will help Canadians make informed decisions, and give them the tools they need to make healthier choices — for themselves, and for their children,” Canada’s Health Minister Leona Aglukkaq said in a statement.

Here in the U.S., the Food and Drug Administration has banned manufacturers from adding caffeine to alcoholic drinks.

While the FDA has kept abreast of what’s happening with energy drinks in Canada, it has no plans to follow suit, said spokesman Sebastian Cianci.

The term “energy drink” is not defined in the Federal Food, Drug and Cosmetic Act, but the FDA regulates the ingredients that go into such drinks. These drinks can be either dietary supplements or conventional foods (i.e. beverages).

“If they are not labeled as a supplement, or intended to supplement the diet, then they’re subject to regulation as conventional foods, and would have to meet the statutory requirements that apply to all conventional food/beverages,” Cianci said.

Meanwhile, the American Beverage Association maintains that the scrutiny surrounding energy drinks is unfair. It says that most mainstream energy drinks contain about half the caffeine of a similar size cup of coffeehouse coffee.

• 19% for health and nutrition 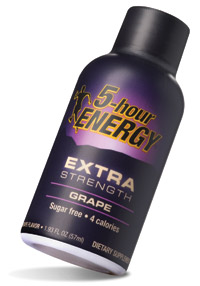 CHICAGO — Energy shots are still in the early stage of their product lifecycle, but have built appeal among a wide base of consumers, according to research firm Mintel.

Therefore, Mintel believes that energy shots have a higher potential to grow that consumer base in the next five years, compared with energy drinks.

Energy shot dollar sales soared 41% to $84.8 million in food stores for the 52 weeks ending Dec. 25, 2011, compared to the prior year, according to SymphonyIRI.

Mintel believes that energy shots have experienced growth largely by adding new users that are not active in the energy drinks segment.

Energy shots have appealed to consumers on a platform of energy boost without the sugar and crash associated with energy drinks, according to Mintel.

Although energy shots are more expensive on a unit basis than energy drinks, most promise “hours of energy” with the consumption of a single shot. This marketing platform has likely enhanced shots’ value proposition.

“We designed our product to address the needs of a wide spectrum of people: busy moms, first responders working long shifts, truck drivers, office workers, or any other number of hard working adults who need a boost to stay alert and focused or who need help getting through a tough day,” said Elaine Lutz, spokeswoman for Living Essentials, Farmington Hills, Mich.

In addition to flavor varieties, it has seen consumer interest move beyond the individual bottle to multi-pack sales. It introduced four-packs to the food channel last year. Many supermarkets now carry two-packs, four-packs and six-packs.