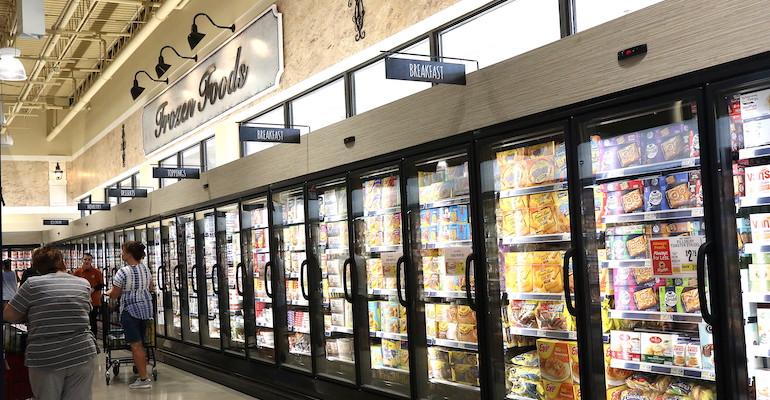 ShopRite
Half of consumers who bought frozen foods since the onset of COVID-19 in the United States expect to buy more in the next several months, according to the AFFI-210 Analytics study.
Product Categories>Center Store

Category’s sales holding at over 30% higher versus a year ago, AFFI finds

Seven in 10 frozen food shoppers have stepped up the amount of frozen food they buy since the beginning of the coronavirus pandemic, according to the American Frozen Food Institute (AFFI).

The uptick has kept purchases well above normal, AFFI and research partner 210 Analytics found in their “Frozen Food Sales Amid COVID-19” study, released yesterday. Following a 94% jump in mid-March, overall frozen food sales are holding at 30% to 35% increases in April compared with a year earlier. (Charts courtesy of AFFI)

“Frozen foods have emerged as a sales powerhouse amid COVID-19 buying,” the AFFI-210 Analytics report said. “Sales patterns during the first week of March 2020 were much in line with the 2019 results. While nonfood sales, such as paper goods and household supplies, started gearing up the week ending March 8, food sales took over starting the week of March 15. Frozen foods quickly emerged as a growth leader, nearly doubling sales the week ending March 22 compared with the comparable week in 2019. The weeks ending March 15 and 22 were the two big panic-buying weeks, but frozen food sales remained highly elevated going into the second week of April.”

Of more than 1,200 U.S. adults polled online from April 10 to 14, 86% have purchased frozen food — such as frozen pizza, vegetables or entrees — since early March, when the COVID-19 outbreak began to escalate.

“This includes an equal share of frequent frozen food buyers, as well as consumers who don’t consider themselves regular purchasers,” observed Anne-Marie Roerink, founder and principal of 210 Analytics. 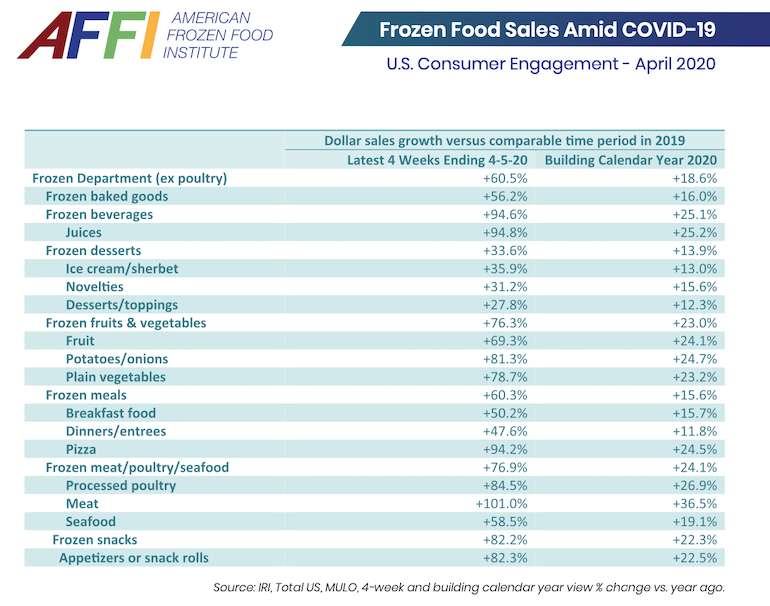 What’s more, the category has drawn new customers, as 7% of consumers who previously, rarely or never bought frozen foods before the pandemic are now purchasing them.

“This is a tremendous expansion of the category that could have long-term implications,” Roerink noted. “This includes Gen Z buyers, as well as Baby Boomers who left the category during the TV dinner era, returning now to find newer, tastier products.”

Shopping behavior among current frozen-food consumers has changed as well. On top of 70% buying more frozen fare than usual, 68% of survey respondents said their purchases included different items than usual and 72% picked up different brands than usual because of unavailability. Inventory issues likely influenced purchases of different items and brands, as 73% of shoppers said they encountered out-of-stocks when shopping for frozen foods amid the pandemic.

“The vast majority of consumers bought at least some frozen foods prior to coronavirus- induced shopping. The larger their freezer capacity, the greater the tendency to purchase frozen foods,” the study said. “Those patterns remained true during the weeks of panic buying and beyond, as frozen foods emerged as a sales powerhouse for immediate consumption and backup supply.”

When asked why they purchased frozen food, consumers cited long shelf-life (60%), the ability to stock up in case of food shortages (58%) and the desire to limit the number of trips to the supermarket (51%). Shoppers also pointed to ease of preparation (46%), faster preparation and cleanup (36%) and a belief that frozen foods currently are safer than fresh items (33%). 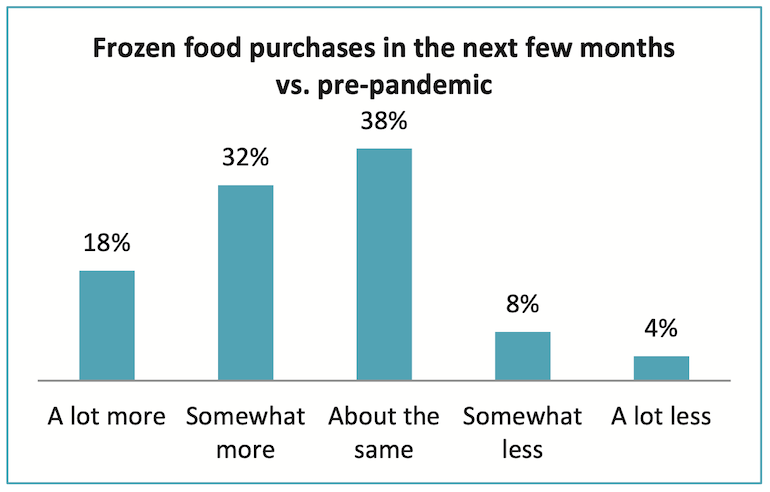 Half of consumers who bought frozen foods since the onset of COVID-19 in the United States expect to buy more in the next several months. Eighteen percent reported they plan to purchase “a lot more” frozen products, and 32% aim to buy “somewhat more.”

“This study suggests frozen will remain a category heavyweight for months and years ahead, as the category attracts new and returning customers who are relying on a variety of frozen foods to provide much-needed convenience and satisfaction,” according to Alison Bodor, president and CEO of Arlington, Va.-based AFFI. “These results show growth in the category that goes beyond the popularity with Millennials that was illustrated in our ‘2019 Power of Frozen’ study.”

The frozen category also has benefited from the upsurge in online grocery purchases during the coronavirus outbreak. Of those polled in the second week of April, 46% had ordered groceries online since early March, covering approximately a one-month time span. As a share of the total population, 39% had ordered frozen foods online since early March, signifying that 85% included frozen foods as part of their order versus 73% pre-pandemic, the AFFI-210 Analytics report noted.