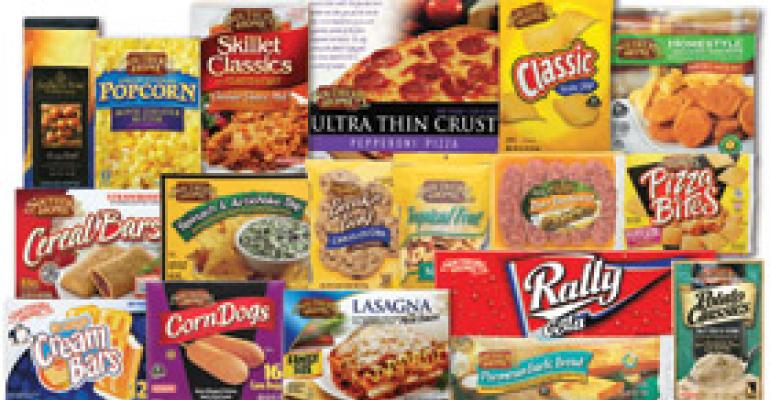 If store associates believe in a brand, chances are their support will rub off on shoppers.

The retailer sent coupons for its new Family Gourmet cookies to 48 stores so that employees could try them. Several weeks later, it ran a contest to see which stores could sell the most cookies. Those that did won cash prizes.

The event generated such a large sales lift that Family Dollar rolled out the cookie contest chainwide. The sales lift was equally as good.

“We wanted to incentivize our team members to drive sales of the cookies to foster greater trial among our shoppers,” said Mary Rachide, Family Dollar's private-brand divisional vice president. Rachide did not divulge the sales lift.

The effort is why Family Dollar is one of 10 retailers SN is recognizing in its second annual Top 10 list of distinguished store-brand promotions.

Indeed, retailers recognize that private-label success relies on more than just product innovation. It also requires a marketing plan that gets consumers interested in and excited about the brand.

As a result, companies are beefing up promotional activity, running everything from high-value sweepstakes like car giveaways to delivering free bags of groceries filled with private-label foods directly to consumers' homes.

SN selected the following initiatives based on a variety of criteria, including originality; high-value prizes; ability to generate consumer excitement about and engagement with the brand; Web-centric capabilities; and ties to a cause-marketing platform. All programs were executed over the last 18 months.

They appear in alphabetical order.

The goal of the promo, called Three to Get Ready, was to encourage non-buyers to try its brands, and current purchasers to try something new.

“We wanted to drive awareness of our [Texas Motor Speedway] partnership, while stimulating trial of our store brands,” said Chris Hardin, Brookshire's director of corporate brands and category management.

The retailer designed the promotion to be fun and exciting, as well as engage shoppers and build larger shopping baskets.

“It really doubled as a means to induce trial, and display our involvement in lifestyle activities that our customers are connected with,” Hardin said.

While Brookshire has been the official grocery store of Texas Motor Speedway for five years, this is the first time that it connected the partnership to a store-brand promotion.

Hardin said the initiative was a success, citing loyalty card data showing a 14% increase in transactions that had three or more Food Club items during the promotion.

Meanwhile, Food Lion is on the leading edge when it comes to private-label mobile promotions. For instance, it ran a “Breakfast Club” mobile offer good for $1 off Food Lion-brand instant oatmeal.

The temporary offer was given to all those who texted “oatmeal” to 467467. Savings were automatically downloaded to shopper loyalty cards.

“We wanted to provide an easy way for Texans to get directly involved in supporting their local food bank,” Danny Flores, H-E-B's public affairs manager, said in a statement.

“It's ingrained in people's minds that national brands equal quality. We want to help alter the perception that ours are just as good,” Kotcher said. “It's a little known fact but many of our products are manufactured and come off the same line as national-brand manufacturers.”

The outpouring of support for the program has been overwhelming, Kotcher said. The store manager fielded numerous calls of thanks from recipients.

Save-A-Lot hopes the effort will spur a new business model, one in which retailers create emotional connections with their consumers.

“A good, effective, emotional connection is still most powerful face to face,” he said. “We hope to bring that trend back.”