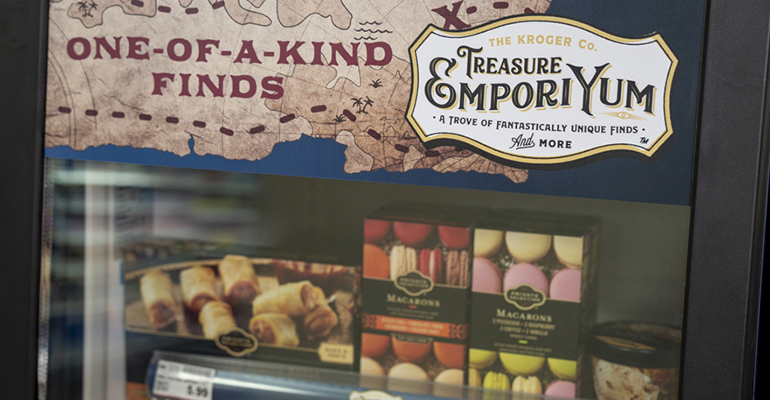 The Kroger Co. is looking to help customers discover some hidden gems in its Our Brands roster.

This fall, the supermarket giant began testing a food merchandising concept called the Treasure EmporiYum, which showcases select products from its exclusive brands. With strong appeal to foodies, the eye-catching, center-store display — which also has its own website — is designed to stir excitement in new and one-of-a-kind flavors. On its signage, the EmporiYum promises customers “a trove of fantastically unique finds.”

“We have large stores, and we have spent the last number of years creating some unique items our customers will really love. And we think we have more exciting ‘treasure’ than other places because ours is buried treasure. We have 100,000 SKUs, not 2,000 SKUs. So we really wanted to unbury the treasure,” said Gil Phipps, vice president of branding, marketing and Our Brands. “We’ve created a dense and intense place for it called the Treasure EmporiYum, with ‘X marks the spot’ on these items throughout the aisles. We really want to call them out and tell customers about what makes them so special that it’s worth stopping and reading.” 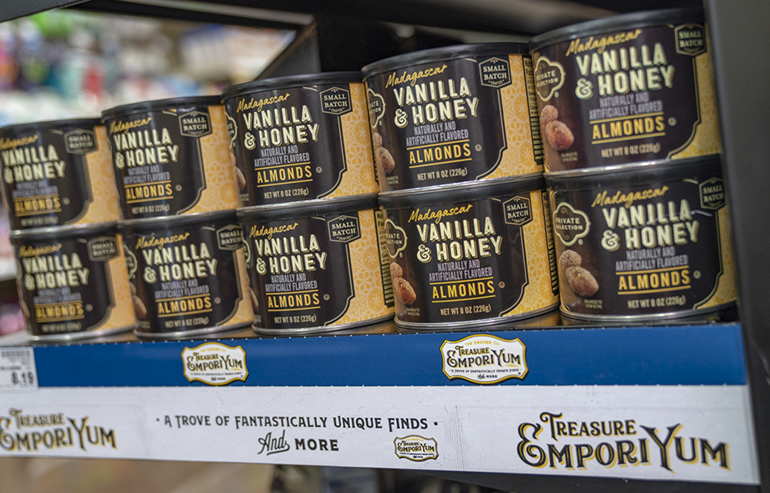 Products in the EmporiYum include craft sodas and snacks such as chips and nuts; frozen food like pizza, shrimp, ice cream, treats and hors d’oeuvres; olives and olive oils; small-batch sauces, including steak, barbecue and mac-and-cheese sauce; a range of Italian pastas and tomato and cream sauces; and Fair Trade, organic coconut waters. Featured brands include the Kroger label as well as Private Selection, Simple Truth and HemisFares.

“It’s stuff that is exclusively available from us, true innovations to flavor combinations that you’re not going to find anywhere else,” Phipps said. “These are some real destination-driving items that you’d want the credit for showing to your friends.”

EmporiYum items also are flagged across the store with “X marks the spot” shelf tags, creating a “treasure hunt” shopping experience for customers. “It will help you find the treasures throughout the aisles in addition to what’s on the EmporiYum display,” noted Phipps.

An endcap unit, the EmporiYum display stands about 8 feet high, including the top signage, and has three 4-foot sides, including a glass-door refrigerated or frozen cooler, which can be switched out.

“We’re seeing a lot of distinctive and innovative items in the frozen and refrigerated section, so we thought it was critical to merge that into the concept,” said Brad Studer, director of Our Brands. “I haven’t seen anybody else in the industry do that.”

A video screen was tested on the EmporiYum display, but it currently has a backlit sign up top, according to Studer. “We’re getting some feedback on how customers are using video in stores, such as for recipes, etc., and are looking at that in our online component. So we’re testing different versions of how people want to interact.”

Key to the EmporiYum concept is a colorful magazine that tells how Kroger curated the items serves up more information about the products as well as recipes and other content. It’s offered in print at the display and as a digital version online.

“I think customers want to know the stories behind the products,” Phipps explained. “We made the magazine informative and fun to read so customers can learn about the items in their cart.”

Added Studer, “Other retailers are doing brochures and magazines, but none are doing it with a destination that brings it all together. And it’s really resonating.”

The idea for the EmporiYum emerged, in part, from what Kroger was seeing from customers on its social media properties, according to Phipps.

“We do a lot with social media, and our customers send us a lot of message about products, like ‘Oh my god, I just found this item.’ And they’re really excited and passionate about it,” he said. “Then we realized the product has been out there for a while. So we wanted to help customers find these items more quickly.”

In a brand equity study with consumer goods researcher IRI, Kroger’s Our Brands racked up strong scores, Studer pointed out.

“The Kroger brand was actually the most-loved brand sold in our stores, Private Selections scored really well and Simple Truth scored exceptionally. But within that information, some of the areas where we could have scored better was in uniqueness,” he said. “We had this information and were thinking about all of these fantastic items we had that were distinct and unique, but the awareness was very low. So we brainstormed about what we could do to bring this to life.”

So far, the full EmporiYum concept — including the display, magazine, shelf tags and online component — is being tested at a Kroger supermarket in Newport, Ky. About two weeks ago, Studer said, Kroger rolled out a broader promotion for EmporiYum items in stores that included the tags plus the print and digital magazine.

“It’s still a test in that we’re perfecting the EmporiYum display, identifying the optimum location in-store, and making some tweaks here and there before we roll it out widely,” Phipps said.

At the Newport store, the EmporiYum is located near the meat section. “It’s in the back part of the store, centrally located, where the biggest hub of shopper traffic is,” said Phipps.

The display also was previously tested in the front of the store, but both locations have seen a strong customer response, Phipps and Studer said.

“The sales uplift has been fantastic, and the feedback is great. We’re getting a lot of social media posts about it,” according to Phipps.

To help identify stores where the EmporiYum will have the most appeal, Kroger is using data from its 84.51° customer analytics unit. “It will be a much bigger program in Q2 of 2019,” Phipps said.