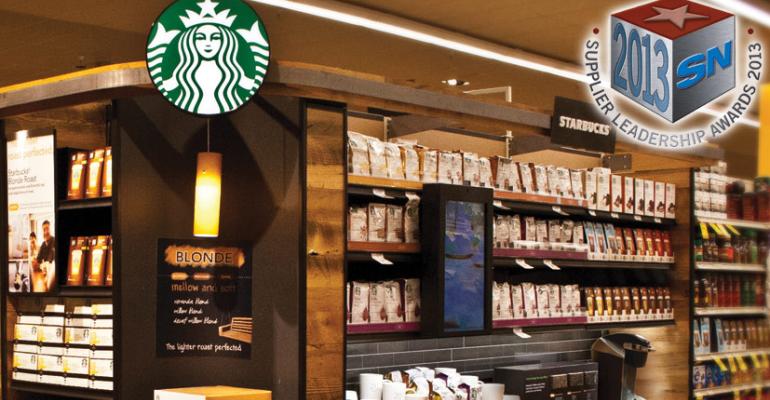 • Starbucks creates supermarket displays that have the look and feel of its cafes.

• Safeway uses the displays to stock an exclusive Starbucks roast.

Starbucks has positioned its cafes as much more than a place to buy coffee. It’s now working to do the same for supermarkets.

In that vein, it has created a new merchandising display that not only stocks its coffee, but also reflects the ambiance of its cafes.

“We’ve created a special place in the center of the store,” Joe Manning, Starbucks’ director of channel development, told SN.

Anchored with the Starbucks’ logo, the wood-trimmed prefabricated “Signature Aisle” displays run about 9 feet. Designed specifically for food retailers, the units resemble a Starbucks cafe, complete with the mermaid logo and brand messaging.

“The display gets people interested in shopping the coffee aisle,” Manning said.

The display is designed to help shoppers navigate the coffee section. Shelf signage provides details about the available roasts.

Starbucks even brings in baristas to talk about how its coffees are sourced and produced. The baristas also host coffee brewing sessions.

“We’re bringing some of the magical moments of our cafes into the supermarket aisle,” Manning said.

By the end of the calendar year, the Signature Aisle will be in about 200 stores, including 160 Safeway locations and 20 Kroger units.

The section stocks a variety of Starbucks’ whole bean and ground packaged coffee, K-Cup packs, VIA Ready Brew, VIA Refreshers and hot chocolate, as well as coffee mugs and tumblers.

The displays feature strategically placed products. For instance, tapping into the popularity of the single-cup market, Starbucks merchandises K-Cup single-cup packs adjacent to Via instant coffee.

“We’ve created a  Starbucks center as the lead-in to the hot beverage aisle,” Manning said.

The endcap of the Signature Aisle highlights seasonal, holiday and other special coffees. This past spring, for instance, Starbucks’ new Blonde Roast was the featured product.

“The endcap gives attention to the hero product,” Manning said.

In Safeway stores, the endcap is being used to promote Africa Kitamu, a limited-edition coffee Starbucks is marketing exclusively at Safeway banners through October. The brand carries a suggested retail price of $8.99 per 12-ounce bag.

Another exclusive blend — Costa Rica Tarrazú — is being sold only at Minneapolis-based Target. (Target does not merchandise the Signature Aisle.)

A third exclusive — Organic Serena Blend — is available for a limited time at both Safeway and Target, but no other retailers.

All three coffees were discontinued in 2011 to make room for the retailer’s new Blonde Roast, according to a Starbucks’ blog post.

Seattle-based Starbucks opted to revive the brands as exclusive offerings for food retailers.

“The Signature Aisle is an excellent way to showcase these exclusive items in a way we haven’t been able to before,” Manning said.

When Starbucks baristas visit the store, they talk up the exclusive brands. For instance, they may educate shoppers that the name “Kitamu” is Swahili for “delicious beyond description.” The coffee has essence of currants, citrus and raisins, according to a blog post on starbucks.com. With medium-level roast, acidity and body, Africa Kitamu “is an exotic yet well-balanced blend,” according to the blog.

“Customers like the fact that we can help them become more knowledgeable about coffee,” he noted.

In addition to coffee, the Signature Aisle is used to promote other company offerings. In June, for instance, it highlighted the launch of My Starbucks Rewards, a loyalty program once offered only in Starbucks cafes. In May, My Starbucks Rewards expanded into grocery. The program allows customers to earn points for purchases of Starbucks packaged coffee where they buy groceries. To date, the program has 6.5 million members in the U.S.