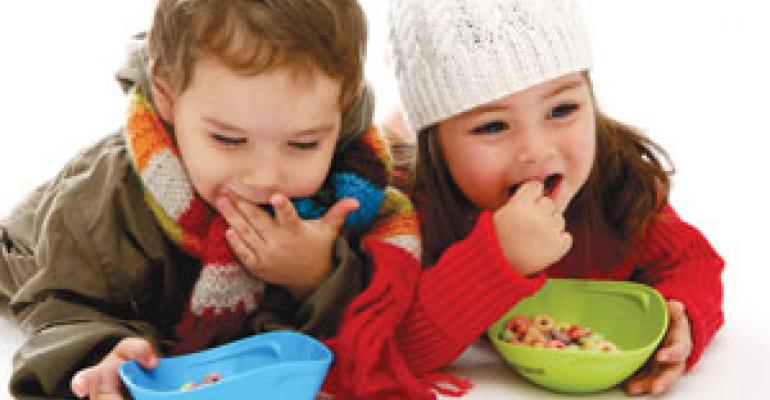 As they cater to petite palates with natural and organic fare, retailers' private-label lines are thriving just as vigorously as the little ones who are consuming their creations. Tapping into the long-underserved market is proving to be profitable, retailers told SN. The children's segment is finally catching up to the level of adults in terms of quality and selection, said Matt Cohen, founder and

As they cater to petite palates with natural and organic fare, retailers' private-label lines are thriving just as vigorously as the little ones who are consuming their creations.

Tapping into the long-underserved market is proving to be profitable, retailers told SN.

“The children's segment is finally catching up to the level of adults in terms of quality and selection,” said Matt Cohen, founder and chief executive officer of single store Kidfresh, New York, which merchandises a range of store-brand items that are nutritionally balanced for different age groups. “We are answering the need for convenience, quality, freshness and good nutrition for this group of consumers, who have not been addressed in such a complete way in the past.”

Kidfresh produces its own line of all-natural and organic kid and baby foods, made fresh daily and sold in its store, on its website and at specialty toy store FAO Schwarz. Travelers can also pick up Kidfresh at New York's John F. Kennedy International Airport at the JetBlue and American Airlines terminals.

“We're finding that there's a huge market for wholesome foods for children that are 100% natural or organic, with no preservatives, additives, colors or fats of any kind,” noted Cohen.

Eight-ounce bottles of Kidfresh water retail for $1.25, while 4.5-ounce packages of store-brand frozen baby food, made by Evie's Organic Edibles of Manhattan, sell for around $4.50 each. The retailer also merchandises jars of private-label baby food in varieties including banana, pear and cherry; lentils; and peas. Shoppers can purchase freshly made main dishes, sides and desserts, choosing from selections like a hand-shaped sandwich with soft hummus; tender carrot wheels; and fresh fruit kabobs.

“There are a lot of areas in this demographic that haven't been tapped,” he said. “Frozen baby food is still emerging and needs to gain more consumer acceptance. Price is also an issue that needs to be addressed, especially with natural and organic products, which are much more expensive than traditional items.”

Allergy-centric products are also on the cusp, with some retailers offering gluten-free, wheat-free and nut-free items that are easier on a young consumer's system, he added. Shoppers are responding with their wallets.

Sales of private-label baby food increased 9.7% to $22.3 million during the 52 weeks ending Oct. 6, while sales of branded baby food grew by just 3.3% to $3.1 billion in the same time period, according to figures from the Nielsen Co., New York.

Branching out into babies and kids is a logical step for just about any retailer with its own line of products, said Brian Sharoff, president of the Private Label Manufacturers Association, New York.

“Assuming a retailer has credibility, a name that is well respected, and if it can create something by way of packaging and content significantly different and better than the national children's brands on the market, private label will work,” he said.

Rice and oatmeal cereal and organic baby foods in three stages, along with milk-based infant formula with iron and a blend of lipids and DHA, are part of the organic baby line. O Organics for Toddlers includes snack crackers, apple cereal bars and bite-size Strawberry and Maple Arrowroot Cookies, among other products.

Kid-friendly fare such as ringlets organic cereal, peanut butter and a variety of juices are included in Safeway's latest private-label addition, its O Organics for Kids line.

“We are also revising our age target from 5 to 10 years to consumers who are between the ages of 4 and 8,” she said.

The chain's decision to change its target age group came after research revealed that kids begin to perceive themselves as more adultlike at or around the age of 8. Consequently, they don't respond well to marketing strategies aimed at children.

“One is a range of juicy water drinks that provide a child with a portion of their 5-a-day [of fruits and vegetables], with no artificial colors, flavorings or preservatives,” said Quarmby. “The other is a range of organic miniature kids' fruits: apples, pears and kiwis.”

The retailer will also introduce cooking equipment and an apron-and-hat set to encourage kids to participate in meal preparation. They can get started with the line's mini-burger kit that includes ground beef, seasonings and a round cookie cutter for shaping the perfect patty.

Also new in February, all of the Sainsbury's private-label children's products will bear the suggested Food Safety Standards front-of-pack Multiple Traffic Light Labeling system. The color-coded icons will enable moms to quickly discern the fat, saturated fat, sugar, salt and calorie content of each product, according to the retailer.

Healthy and wholesome items often catch parents' attention, but licensed characters, such as those used in Kroger's Disney Magic Selections line, reel in the youngsters.

The initial offerings of the line, which was launched last year, consisted of around 100 items with characters from Disney/Pixar's “The Incredibles” on packaging.

Then the chain rolled out its baby and toddler products touting Disney images of Bambi, Thumper, Dumbo and the Bear in the Big Blue House.

Licensing is likely to be incorporated into more private-label lines in upcoming years, said Sharoff.

Harvest Market, Fort Bragg, Calif., doesn't have its own line of children's foods, but Yvonne Galliani, store manager and district buyer for the retailer's two stores, recognizes the potential.

“If we added private label for little kids or babies, we would probably start with something like juice,” she said.

Galliani is on target with today's trends. Sales of private-label baby juice increased 4.8% to $492,448 during the 52 weeks ending Oct. 6, according to Nielsen. In comparison, branded baby juice sales were down 10.9% to just over $69.6 million during the same time period.

Whole Foods has a store-brand line that contains 100% pure, organic fruit juice. Safeway also has its own brand of juices for kids in apple, wild cherry, fruit punch and lemonade juice varieties.

While Harvest Market might consider its own line of juices in the future, baby food isn't on the retailer's list, said Galliani.

“Canned and bottled baby foods have always been slow movers for us, because most of our customers are into natural and organic foods for themselves and their children, and they typically make their own baby food,” she said.

Indeed, some categories fare much better than others when it comes to private-label products for children, said Jim Hertel, managing partner for Willard Bishop Consulting, Barrington, Ill.

“In high-spend, frequently purchased categories like diapers and wipes, economic necessity can compel shoppers to try private label. After that, it's up to the quality of the products to create repeat purchases,” he said. “But, when buying something that will be consumed by a baby or child, like cereal, shoppers are less likely to try private label.”