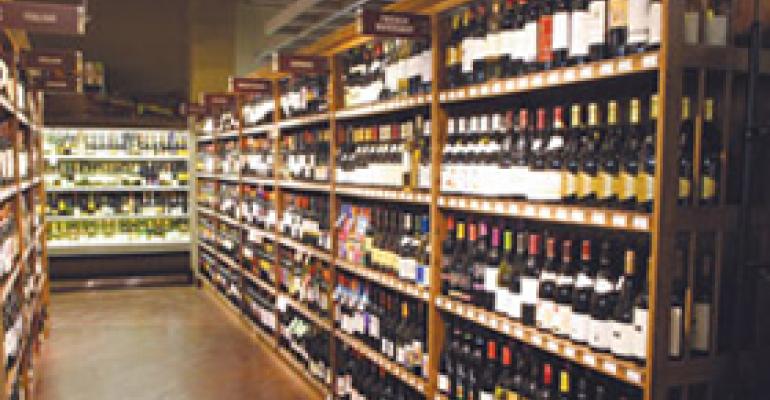 The high basket rings that accompany wine sales make it a business most food retailers want to be in. The problem is, legislators don't always agree. But that hasn't stopped retailer groups from pressing ahead in their quest to position their stores as one-stop-shopping destinations. The number of food retailers winning such approval is growing as new laws clear the way for bottles of merlot and chardonnay

The high basket rings that accompany wine sales make it a business most food retailers want to be in. The problem is, legislators don't always agree. But that hasn't stopped retailer groups from pressing ahead in their quest to position their stores as one-stop-shopping destinations.

The number of food retailers winning such approval is growing as new laws clear the way for bottles of merlot and chardonnay to join meat, seafood and canned goods in shopping baskets.

New York state law currently limits beer sales to the state's 19,000 grocery stores, and wine and liquor sales to the 2,400 liquor stores. Supermarket chains can have one liquor store that sells wine, but it must operate separately from its food store.

However, the state could join 35 others that permit wine to be sold in supermarkets, if a recommended action in the 2009-2010 New York State Budget is approved.

Gov. David Paterson included, as part of a plan to close a massive budget deficit, a proposal to allow wine sales in supermarkets. If approved, the state could raise much-needed revenue in the form of franchise fees, which supermarkets would pay for the right to sell wine.

The proposed one-time fee would be 0.46 of 1% of gross sales, according to Jim Rogers, president of the Food Industry Alliance of New York State, Albany. The state estimates that about two-thirds of grocers will apply for licenses with this fee structure.

The FIA had recommended a cap of $150,000 per store based on sales volume, a fee it determined would get 90% of the state's grocers involved in the wine business. Since the governor's plan has no cap, stores could wind up paying more than $150,000.

While the alliance wanted the fee to be lower, it realizes the state needs revenue, and is grateful that the proposal is in the budget and being seriously considered, said Rogers.

A decision could come by April 1, when the state's budget is due, although it's been late in recent years.

The FIA has just shipped out flyers that grocers can distribute to shoppers. The flyers ask shoppers to write in if they would like to purchase wine in their supermarkets. The FIA will collect the flyers and distribute them to New York legislators as proof that their constituents want wine in supermarkets.

Hannaford Bros., Price Chopper and Wegmans are among the retailers that actively support the proposed legislation. Representatives from all three companies were unavailable for comment.

The FIA said the plan could not only help supermarkets, but also the state's agricultural community, as New York is the third leading wine-producing state after California and Washington.

About 70% of New Yorkers want to buy wine in supermarkets, according to an FIA survey.

Liquor store owners are not among them. The New York State Liquor Store Association has joined forces with other liquor groups to form “The Coalition to Save the Last Store on Main Street,” a strong campaign to prevent the proposal from going through. Members said wine in supermarkets would put independent liquor stores out of business. Among other efforts, the association is circulating a petition for liquor store customers to sign, writing to state lawmakers and beefing up contributions to its political action committee. A representative from the Liquor Store Association was unavailable for comment.

Rogers counters that supermarket wine sales would not put liquor stores out of business. As an example, he cited California and Washington, two states where supermarkets and liquor stores both compete successfully for wine business, he said.

“There is plenty of opportunity for us to mutually survive,” he said.

New York Assemblyman Marc Alessi, D-Wading River, has suggested a way to make both sides happy. He has recommended that New York follow a wine plan used in Arkansas that allows supermarkets to sell only wines from small producers, those that make 250,000 gallons or less. Nearly all (248 of 250) of New York's wineries would qualify under these standards, although mass-produced wine would not. Alessi reasons that this would provide liquor stores with a point of differentiation, while giving supermarkets the much sought-after wine business.

“I think this is a concept that all sides can agree on,” Alessi told SN.

While the situation in New York remains undecided, retailers in Texas have experienced an increase in the number of supermarkets that can sell beer and wine.

That's because in 2003, the state eased restrictions on local elections that give communities the right to choose whether to legalize the sale of alcoholic beverages. While some have stayed dry (meaning no sales of alcoholic beverages anywhere in the county) or partly dry, more are going wet.

Prior to Sept. 1, 2003, the law required that 35% of all registered voters sign a petition to get an issue on the ballot. Now, the number of signatures required is 35% of the people who voted in the last gubernatorial election. Also, before 2003 the signatures had to be collected within 30 days. Now, 60 days is allowed.

Since September 2004, Texas communities have attempted to legalize some form of alcoholic beverages 299 times, with an 80% success rate.

The Texas Grocery & Convenience Association supports wine sales in supermarkets, not only because of the increased sales potential, but also because it provides a customer service.

“Being able to purchase wine in a supermarket is a big convenience for consumers,” said Rick Johnson, TGCA president.

In 2003, Brookshire Brothers in Lufkin, Texas, was allowed to sell wine and beer in 35 stores. Today, 56 of its 74 units can sell the beverages, thanks to new laws in such communities as Lorena and Normangee.

Brookshire stores that sell wine have experienced an incremental sales lift of meat, produce and other foods, according to Phil Metzinger, vice president of specialty beverage and tobacco.

Remerchandising a store from dry to wet is challenging, in that, in the case of beer, it involves making room for refrigerated cases.

“It typically involves resetting the store,” he said.

But it's worth the effort, since wine and beer sales position supermarkets as a one-stop-shopping destination.

“For a lot of consumers, wine is food,” Metzinger said. “Wine is not simply a beverage; it's part of the meal.”

Not everyone feels the same way. Efforts to allow supermarkets to sell wine in Massachusetts and Minnesota both failed recently.

In 2006, Massachusetts consumers voted down a ballot question that would have allowed approximately 1,000 of the state's 1,200 grocers to sell wine. A 73-year-old law prevents any chain in the state from selling wine in more than three stores.

Likewise, despite a strong push in 2006, Minnesota supermarkets did not get approval to sell wine.

Minnesota food retailers distributed window clings and grocery bags bearing ads for the “Wine with Dinner” proposal that sought to allow grocers with at least 8,000 square feet of retail space to sell wine. Direct-mail pieces and store tours for state legislators to demonstrate how stores can adequately check customer identification were also among the retailers' strategies.

Still, the “Wine with Dinner” bill failed to move forward in the Minnesota House of Representatives' Commerce Committee.

“The problem is that it's never gotten out of committee,” said Jamie Pfuhl, executive director of the Minnesota Grocers Association, St. Paul.

The MGA doesn't plan to launch another “Wine with Dinner” campaign, but it's looking at another promotional push.

“We're looking at retooling and launching a different approach,” Pfuhl said. Details have not been finalized.

What makes the state unique is that municipalities are allowed to run liquor stores, thereby generating money for local governments. About 200 such liquor stores are currently in operation, according to Pfuhl.

“These folks have a real stronghold,” she said.

Pfuhl admits it will be hard to get a change in philosophy, but is hopeful for a change in legislation.

“We will certainly see a change in the future,” she said.