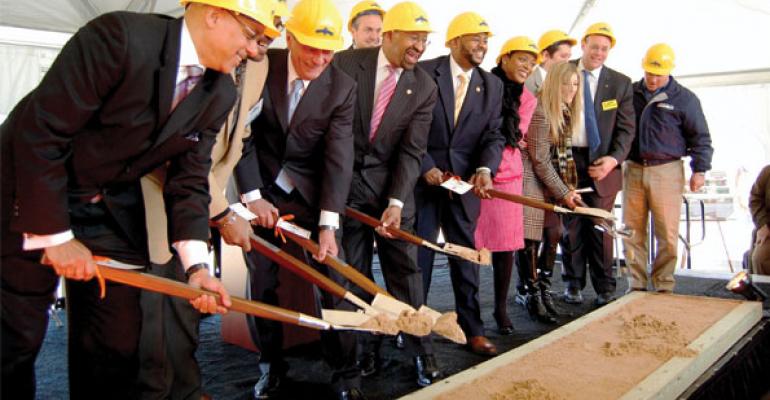 Independent retailers play a major role in the national effort to build food stores in low-access areas. &ldquo;I was inspired by the possibility that what I do for a living could help people.&rdquo; &mdash; Jeff Brown, president and CEO, Brown&rsquo;s Super Stores

Jeff Brown found his calling about 10 years ago when he joined an effort to provide low-income communities in Pennsylvania with access to healthy food.

“I was inspired by the possibility that what I do for a living could help people,” said Brown, president and chief executive officer of Brown’s Super Stores, a Wakefern Food Corp. member that runs 10 ShopRite stores in the Philadelphia area.

He got involved in Pennsylvania’s Fresh Food Financing Initiative, a grant and loan program that encourages supermarket development in underserved neighborhoods, to help rid the area of so-called food deserts. These are classified as urban communities that do not have a supermarket within one mile; and rural areas, 10 miles.

Food deserts are prevalent, as 23.5 million Americans live in low-income areas that lack stores likely to sell affordable and nutritious foods. About 11.5 million of these people are living in households with incomes at or below the 200% poverty line, and 6.5 million are children.

Brown plays a big role in the national effort to change that. He is one of the biggest food retail crusaders against food deserts, so much so that he was invited to sit with First Lady Michelle Obama during President Obama’s January 2010 State of the Union Address.

Brown is now part of the Partnership for a Healthier America, a national version of the FFFI that works to address the nation’s childhood obesity crisis.

The PHA was founded in conjunction with Michelle Obama’s Let’s Move! campaign. The First Lady serves as the PHA’s honorary chair.

The PHA currently has commitments from 20 companies who have pledged to take steps to help curb obesity. The PHA prepares an annual report detailing the progress of its partners.

Along with participation from nonfood businesses like Hyatt Hotels, the PHA has the backing of several large food retailers. Wal-Mart Stores said it will open between 275 and 300 stores in food deserts by 2016; Supervalu said it will build 250 Save-A-Lot stores in underserved areas over the next five years.

Participation from independents is critical to the success of the battle against food deserts because of their deep roots in the neighborhoods they serve, Brown told SN. 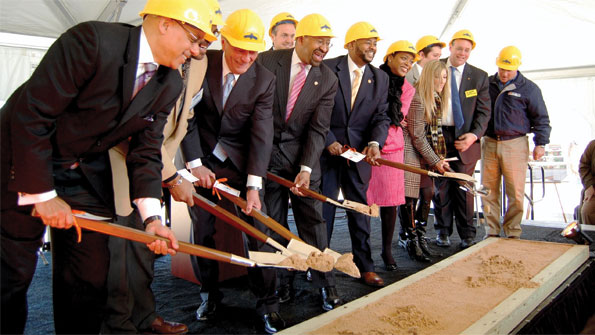 “We don’t create a one-size-fits-all model,” he said. “We design each store in line with the neighborhood.”

Under his agreement with the PHA, Brown committed to opening two stores in Philadelphia food deserts. The first opened last year on Cheltenham Avenue, while the second is slated to open in North Philadelphia on Fox Street in September 2013. In the photo, Jeff Brown (second from right) and local dignitaries break ground on the newest food desert store.

Brown is so committed to the cause that he formed the non-profit UpLift Solutions, Westville, N.J., to help other retailers build profitable supermarkets in low-income communities. UpLift provides counseling on tax credits/abatements, community outreach, store services and other assistance.

UpLift is working Klein’s Family Markets, Forest Hill, Md., also a Wakefern member, to build a 68,000-square-foot supermarket in the Howard Park neighborhood of Baltimore by 2013.

Brown’s stores are designed not only to provide nutritious foods, but also act as a community hub. As such, they have pharmacy, health clinic care and financial offerings.

“Our goal is to build a suburban-style supermarket that’s customized to the community,” he said.

The community that surrounds the site of the Fox Street store is primarily African American with a household income of $25,000 a year. The nearest full-service supermarket is about 3.5 miles away.

While fresh meats and produce are much of the focus, the unit’s Center Store is alive and well. Plenty of packaged goods are available so that customers have the opportunity to choose from a wide selection of foods, said Brown.

“It’s wrong to suggest that people with low incomes shouldn’t have diverse foods,” he said. “We’re not machines.”

The store even stocks specialty foods, like natural and organic consumer packaged goods, as well as gluten-free and other special-diet foods.

The store has already helped low-income families make a change for the better: One of the top-selling items is sugar-free sweet potato bundt cake, said Brown.

While the regular version was selling well, the bakery developed a healthier version. Its strong sales show that if a better-for-you product tastes good, people will change their eating habits, said Brown

“That’s proof that this is a solvable problem,” said Brown.

Gregory Calhoun has similarly high hopes for a new store he plans to build in the tornado-ravaged Pratt City in Birmingham, Ala. The city is 80% African American and has many elderly residents. The nearest supermarket is about 15 minutes away. 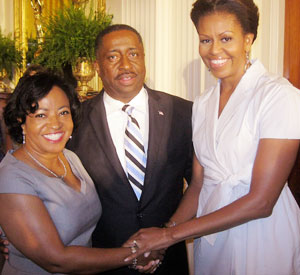 Along with fresh meats and produce, the store will stock organic foods, and provide health care services like blood pressure screenings. (Calhoun, pictured with his wife, meets First Lady Michelle Obama as part of his efforts to build stores in underserved areas.)

Calhoun will also bring in diabetic-friendly and low-sodium foods, and well as packaged goods from African American businesses, including a line of low-sodium “Lady Marmalade” marinades and sauces from singer Patti LaBelle.

Under his PHA commitment, Calhoun will build nine other stores in low-access areas in Tennessee and Alabama by 2016.

Lawrence Soler, president and chief executive officer of the PHA, is impressed that Calhoun, who currently owns five stores, has taken on such a huge role in the PHA.

“Building 10 stores is a significant commitment for such a small company,” Soler noted.

Soler is equally as impressed with Brown’s achievements. Soler has visited Brown’s Cheltenham Avenue store, and was pleased to see such a wide variety of offerings, from halal and kosher meats to an extensive line of Caribbean foods.

Soler hopes to see more retailers — both independent and chain — follow in the steps of Calhoun and Brown.

MOUNTAIN LAKES, N.J. — Pinnacle Foods’ Birds Eye brand is the newest member of the Partnership for a Healthier America.

Under the deal, Birds Eye will spend at least $2 million per year for three years — 2012, 2013 and 2014 — on marketing and advertising efforts to encourage children to consume vegetables. A partnership with Nickelodeon’s iCarly is included.

“I’m proud that Birds Eye and the Partnership for a Healthier America have come together to make the healthy choice the easy choice for families and I hope more companies step up to help our kids grow up healthy and strong,” First Lady Michelle Obama said in a statement. She serves as the PHA’s honorary chair.

Birds Eye said the campaign celebrates and engages “GenVeg” — a generation of children who want to eat and enjoy their vegetables.

He cited recent reports that 42% of Americans may end up obese by 2030, and just 6% of children and teens in America eat the recommended amounts of vegetables.

“It is Birds Eye’s hope to combat the staggering decline of vegetables on kids’ plates by empowering kids to change the vegetable dynamic and engaging kids and moms with frozen vegetables,” Treston said.