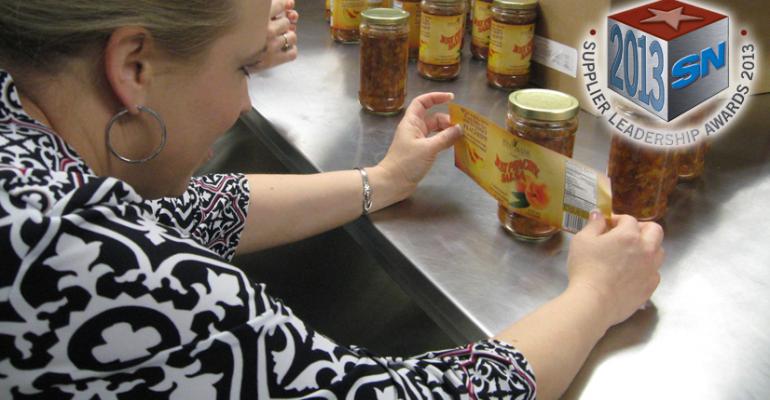 • The Food Bank of South Jersey asked Campbell Soup Co. to develop a healthy recipe that could incorporate 800,000 pounds of peaches diverted from landfills.

• Company volunteers labeled the jars by hand so they could be sold in supermarkets and at farmers’ markets.

When the Food Bank of South Jersey learned that more than a million undersized or slightly blemished peaches end up in New Jersey landfills every year, it jumped at the chance of obtaining some for the 240 food pantries, kitchens and shelters it supports.

“We were shocked, as you can imagine, and said, ‘We’ll take those peaches, they still taste good,’” explained Pamela Pernot, director of external relations for the food bank, which operates under the premise that food should not be wasted so long as hungry people are in its midst.

FBSJ purchased 800,000 pounds of peaches for $100 from farmers who were delighted with the transaction — not only because it meant their fruit would benefit a worthy cause ­— but because it allowed them to avoid the considerable cost of sending unsellable peaches to landfills.

After sending the best of the delicate fruits to FBSJ’s distribution centers, hundreds of thousands of peaches remained. To make use of them before they went bad, the food bank wanted to incorporate them in a shelf-stable product it could sell to raise funds.

Since Campbell Soup Co., headquartered in nearby Camden, N.J., had been supportive of its efforts in the past, the food bank turned to the iconic soup maker’s culinary and product development teams.

“We went to Campbell’s and said, ‘What can we do with these peaches?’” said Pernot. “Their people developed a recipe for peach salsa.”

In keeping with the food bank’s request for a healthy product, the salsa — named Just Peachy — is low in sugar and salt and uses nearly a half pound of fresh peaches per jar, along with crushed tomatoes, jalapenos, onions, cilantro and garlic. Campbell’s suppliers Morton Salt, Sensient, Sun Brite, Nature’s Quality, Mizkan Americas, Kalsec and The Garlic Co. donated the ingredients.

Eastern Pro-Pak pitted the peaches and Campbell donated its services and facilities to produce and package 52,000 jars of Just Peachy. The food bank couldn’t have been more appreciative.

“Who else would be able to come up with a recipe, process it and bottle it and right next door?” said Pernot. “[Campbell] made it easy and they made it fast.”

The soup company also created a Just Peachy label that explains that 100% of sales from each jar benefit FBSJ. But applying the labels to jars was a challenge since Campbell’s labeling facility is located out of state, according to Pernot.

To get the jars retail ready, Campbell’s organized company volunteers who applied the labels by hand to jars of Just Peachy.

“The effort required thousands of people and was very labor intensive,” Pernot explained.

FBSJ secured placement for the salsa in nearby farmers’ markets, ShopRite and Wegmans stores, and at the other local grocery locations from which it receives regular food donations.

Sold at $2.99 per jar, Just Peachy was a hit, bringing in $100,000 in revenue last year — enough to provide 500,000 meals, according to Pernot. The meals helped feed South Jerseyians during post Hurricane Sandy.

“Because of Sandy our food distribution shot up 616 tons in November and December 2012 — an additional 30% over the norm,” noted Pernot.

Campbell was so pleased with the results it engaged in the partnership again this year, and produced 52,000 jars of Just Peachy over a four-day period in August.

“This is a great example of how Campbell can engage in public-private partnerships that can truly make a difference in the community by leveraging our expertise and activating our resources and the skills of our employees,” said Dave Stangis, vice president, public affairs and corporate responsibility for Campbell Soup Co. “Campbell is pleased to advance this unique program that benefits our neighbors, as well as our longtime community partner, the Food Bank of South Jersey.”

New Jersey peach farmers are also happy with the program.

“This project is fantastic for growers,” said Anthony Yula, operations manager at Summit City Farms in Glassboro, N.J., which produces 4.3 million pounds of peaches each year. “What farmers most want is for our produce to be enjoyed.”