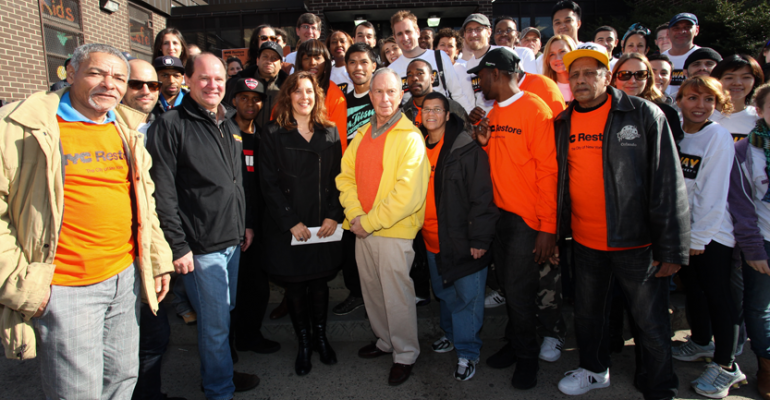 NEW YORK — Even as Fairway Market dealt with the devastating damage Hurricane Sandy brought to its 52,000-square-foot store in the Red Hook section of Brooklyn, company officials made feeding hurricane victims its top priority.

One of the first things the 11-unit specialty supermarket chain did was to collaborate with a local restaurant in Red Hook to provide a barbecue for hurricane-victimized residents, most of whom had no electrical power.

Fairway donated 500 pounds of meat, which nearby Hometown Barbecue Restaurant cooked and then invited local residents to partake of just days after the storm had ravaged the whole area.

Meanwhile, in an impressive, spontaneous move, three New York businesswomen formed a group they dubbed "Thankful to Be Giving,” which took over the coordination of the food relief Fairway had initiated and did what was necessary to bring Thanksgiving dinner to as many area hurricane victims at they could.

“Ashley Swartz of Furious Minds, Inc., the co-founder of Thankful to Be Giving, in collaboration with Jacqueline Donovan, Fairway's vice president of marketing, and Constance Costas, Greenhill Agency, organized the meals' donation, preparation, delivery and distribution,” Bill Sanford, Fairway president, told SN. “Two hundred local volunteers, assembled by Thankful to be Giving, of all ages came out to help serve the holiday dinners.”

Thanks to the group’s monumental effort, more than 4,650 hurricane victims in the New York boroughs were served a traditional, full-course, Thanksgiving dinner.

The Thankful to Be Giving group organized the volunteers and the supplies. Fairway donated the food, with U.S. Food Services providing turkeys; Hershey Entertainment, Hershey, Pa., prepared the food; and Northeast Transport brought the refrigerated meals to community center locations designated by the organizing group.

Fairway’s help didn’t stop there. In fact, Sanford said the company is keeping up efforts to get food and water and other supplies to hurricane victims at the same time it is busy renovating its Red Hook store to get it reopened as soon as possible.

“Fairway Market and several of our suppliers have been busy over the last weeks assisting victims of Hurricane Sandy in many ways,” Sanford said.

Those efforts, he said, include donating 2,500 turkeys to various relief efforts throughout the area; donating a trailer of food to relief centers in Brooklyn and Staten Island hand in hand with Brooklyn Borough President Marty Markowitz; and partnering with suppliers to donate pallets of cleaning supplies to sites in the affected New York boroughs.

More recently, Fairway partnered with White Rose and Thankful to Be Giving to assemble 1,500 “family food packs” which were distributed to victims in the hard-hit Far Rockaway neighborhood.

All of this community work is going on while Fairway is accelerating the renovation of its Red Hook store, expecting to get it reopened by mid-March. Simultaneously, the company has been preparing to open its first store in downtown Manhattan, bringing its total number of stores to 12.