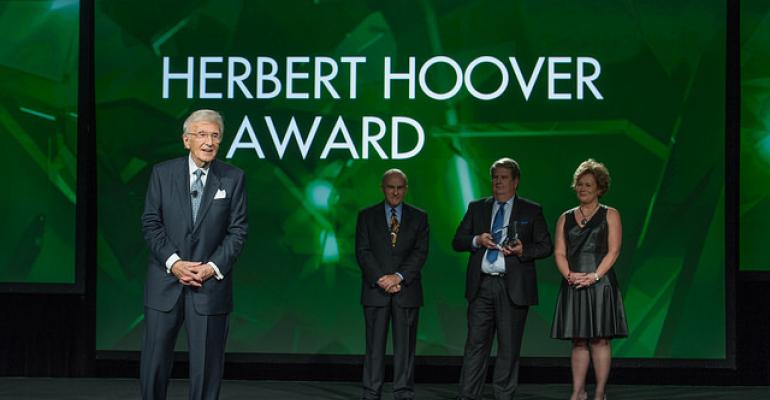 “Dr. Haggai is a true architect of the human spirit,” said Leslie G. Sarasin, FMI president and CEO. “He motivates, inspires and builds communities in his work with independent operators. Honoring him is honoring a global legacy of achievement within our industry.”

The award was presented Saturday during FMI’s Midwinter Executive Conference in Miami.

Haggai, IGA chairman since 1976, has been instrumental in expanding IGA beyond the U.S. to 31 countries around the world.

Noting that Haggai won FMI’s highest honor, the Sidney R. Rabb Award, in 2003, Sarasin said, “It was his business influence that earned Dr. Haggai the Rabb award, but it is his commitment to youth, education and the community for which he earns the Hoover award more than a decade later.”

In a video testimonial, Mark Batenic, president and CEO of Chicago-based IGA, said Haggai is humble, a strong communicator and a good listener. “He’ll tell you he’s not a grocery person — [that] the reason he’s in this business is because he knows people and he knows how to motivate people.

“With IGA, he truly believes he’s on a mission, and that mission is to build community centers.  He firmly believes in the entrepreneurial, family-owned business spirit — not just in this country but all around the world.

“I know you’ve received other awards, but this one to me means the most because it truly exemplifies the kind of life you’ve led, and that life is to be an example for everybody else as they move forward in their lives.”