The largest e-commerce company in the world with a value of $1.6 trillion, Amazon was started as an online bookseller in 1994 by founder Jeff Bezos and has since expanded into virtually every category of retail, including grocery. Its acquisition of 500-store Whole Foods Market in 2017 placed it firmly in the top ranks of U.S. grocery retailers and was the company’s first foray into brick-and-mortar retail. Since then it has expanded its store base with its Amazon Go high-tech convenience stores and Amazon Fresh supermarkets.

Amazon is a true omnichannel retailer, with its success in e-commerce driving much of its grocery success. For instance, its Amazon Prime paid membership — with more than 148 million U.S. members — allows for discounts on products and services, including grocery delivery and pickup. Its pickup and delivery options have boosted its grocery business significantly, particularly in the wake of the pandemic in 2020 as e-commerce soared overall. Innovations such as In-Garage delivery service and cashierless checkout have resonated with consumers concerned with safety during COVID, and now introduced to a new level of convenience in shopping.

Amazon continues to expand its grocery offering. Its new Amazon Fresh supermarkets have opened in 11 locations so far, with reports of plans to add another 28 stores nationwide. There are now 26 Amazon Go locations, the small-format urban convenience stores featuring Amazon’s “Just Walk Out” cashierless technology. And the company continues to innovate its Whole Foods stores, most recently bringing its palm-scanning Amazon One contactless payment system to stores in the Seattle area.

In 2021, founder and longtime CEO Jeff Bezos will be stepping down from that position in the third quarter but will remain a key presence with the company as Amazon shapes its vision and strategy going forward. Andrew Jassy, previously CEO of Amazon Web Services, will take the reins at Amazon later this year. 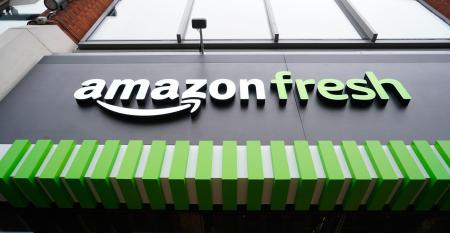 Amazon hikes grocery delivery fees for Prime members
Jan 30, 2023
The benchmark for free delivery increases from over $50 to more than $150

Whole Foods to shut a half-dozen stores
May 03, 2022
Closures come as parent Amazon revamps physical-store base

Amazon One palm-scan checkout rolls out to Whole Foods in Austin
Apr 20, 2022
Technology earmarked for all seven stores in metropolitan area

Whole Foods’ Sherman Oaks store is in a California state of mind
Mar 25, 2022
With a focus on local products, new Whole Foods is also second to implement Amazon’s Just Walk Out technology