Wegmans was originally founded in 1916 by brothers John and Walter Wegman in Rochester, New York. Originally called the Rochester Fruit and Vegetable Company, the name became Wegmans in 1930 and has remained the same since.

The regional supermarket chain is considered a cult-favorite in the Northeast with stores in Maryland, Massachusetts, New Jersey, New York, Pennsylvania, Virginia and North Carolina though it took the chain nearly 50 years to expand out of upstate New York. It wasn’t until 1993 that Wegmans opened its first store outside New York State located in Pennsylvania.

There is a devoted fanbase of Wegmans supermarkets with some people even writing the chain fan letters requesting locations in areas they don’t have any stores open. It is consistently ranked as the “consumer favorite” supermarket chain by Consumer Reports.

In addition to its own private label filled with popular products, Wegmans is known for its selection of hot foods served at mini restaurants inside the store including The Burger Bar, The Food Bar, Sub Shop, Sushi Bar, Pizza Shop, and a Salad Bar.

The 100+ year-old chain currently has 101 locations and is helmed by a member of the Wegmans family, Colleen Wegman, who serves as CEO. 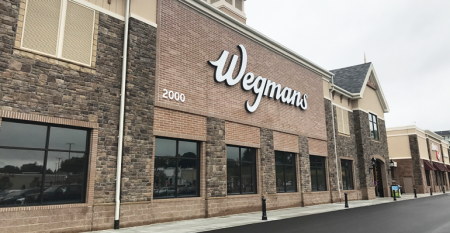 Self-serve food bars are ready for their comeback
Aug 26, 2021
Closed during much of the pandemic, soup, salad and hot bars are reopening in supermarket delis

SN Top 10: Target, Dollar General, Albertsons top the week's headlines
Aug 02, 2021
In this week’s recap of the Top 10 most popular Supermarket News articles, Dollar General has promoted Sanja Krajnovic to senior vice president of store operations, enlarging her role to lead operations of approximately half of the...