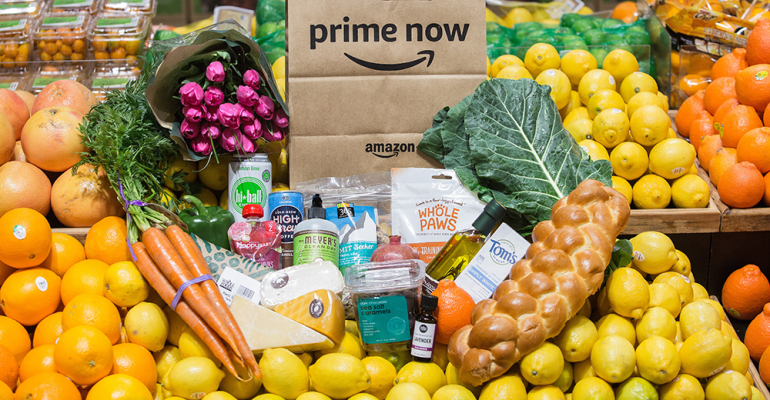 Sales surge by an estimated 40% in second quarter

Amazon.com Inc. has captured 18% of U.S. online grocery sales since 2017, giving it the largest share by far of any single retailer, according to e-commerce intelligence firm One Click Retail.

In a report released Thursday, One Click Retail estimated Amazon’s second-quarter grocery sales at $650 million, up 40% year over year. That growth comes with “nearly every category attracting more and more grocery shoppers to Amazon,” according to report author Jacob Porter, director of global marketing at One Click.

Beverages continue to make up most of Amazon’s online grocery sales market, led by cold beverages at $140 million (+36%) and coffee at $135 million (+40%) in the second quarter. Coffee, in fact, accounted for seven of Amazon’s 10 best-selling grocery items. The Original Donut Shop Regular Medium Roast Coffee (pack of 72 single-serve K-Cup pods) was the No. 1-selling grocery product for the quarter, a designation it also held in the first quarter and for 2017.

“Since the very beginning, coffee has been at the top of Amazon’s food chain,” Porter said in the report. “Not only does it sell much more than any other single product type in the grocery group, but it continues to grow by 40%-plus annually.”

The quarter also saw the continued rise of bottled water in the convenience-driven cold beverages category.

“Bottled water, which has always been a major part of this category, grew by 65% year over year in the last quarter to now outrank energy drinks as the largest subcategory,” according to Porter. “Though Fiji still controls the best-selling bottled water (the ninth-highest selling grocery item overall), the brand lost a significant share of the market in Q2 by failing to keep up with the category growth. While Fiji lost 5% of their market share in the last quarter compared to the same period in 2017, Essentia gained an additional 4% of the market and now ranks as the largest water brand on Amazon.”

Amazon’s private brands continued to make strides as well in the second quarter, which saw the introduction of a new category: coffee pods under the Solimo brand. One Click’s report noted that the product already ranks among the top 25 coffee pods and averages an estimated $60,000 in weekly sales, comparable to established brands like Caza Trail, Peet’s and Eight O’ Clock.

“Because this product only launched in Q2 and is technically still in its initial growth phase, these numbers do not properly illustrate Solimo’s potential as a coffee brand,” Porter noted. “It’s entirely possible that by the end of the year it could be one of the biggest grocery brands on Amazon.”

While the Happy Belly private label ranked as the No. 5 overall snack food brand on Amazon in 2017, it has since dropped to No. 16 in the wake of its top-selling classic trail mix being discontinued late last year, One Click reported. Yet the Whole Foods Market brand 365 Everyday Value continues to thrive on Amazon.com.

“Though still only available online via Prime Pantry, 365 Everyday Value is now Amazon’s largest private grocery label and is lending more fuel to Amazon’s subscription model. With Prime’s growing list of value-added ‘members only’ features, Amazon is investing in what is arguably the country’s largest customer loyalty program,” Porter explained in the report.

Amazon’s current share of the online grocery space is double that of its closest competitor, he added.