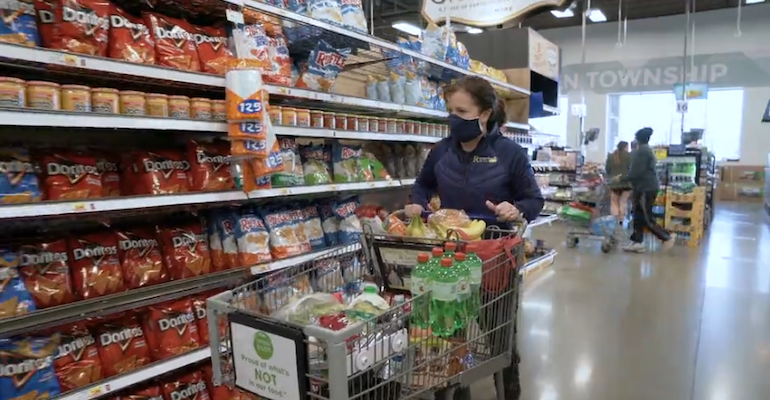 With concern about coronavirus pandemic rising, U.S. consumers plan to spend 25% less on food and 36% less on gifts this holiday shopping season versus a year ago, according to customer data specialist dunnhumby.

In the sixth wave of its Consumer Pulse Survey, a study of the impact of COVID-19 on consumer behavior and attitudes across 21 countries, dunnhumby found that Americans are at their highest level of worry about the virus since the crisis began. The dunnhumby Worry Index — a measure of how consumer concern about COVID-19 — climbed from a low of 24% in September (Wave 5 of the survey) and May (Wave 3) to 32% in November, coinciding with the recent escalation of the pandemic.

In a sign of U.S. consumers’ elevated level of caution, 10% of those surveyed said they wouldn’t be buying any gifts this holiday seasons. Dunnhumby noted that the spending pullback comes as Americans are increasingly worried about not just the virus but also the economy, their personal finances and the higher cost of food.

“Worry is back with a vengeance, as consumers are being hit with multiple intersecting crises, at a time typically spent gathering with family and friends,” Grant Steadman, president of Chicago-based dunnhumby North America, said in a statement. “The majority of consumers report that both their personal finances and the country’s economy are in poor shape while they are being hit by rising food prices.”

With the resurgence of Covid-19 during Wave 6 of the study, U.S. consumers are again cutting back on shopping trips, dunnhumby revealed. The number of weekly shopping trips is down to 4.6 — lower than levels seen in April — as online shopping now represents 29% of the weekly trips, in line with the global average (27%) for online shopping. What’s more, 25% of shoppers surveyed in November said they’re increasingly worried about safety while shopping, which followed a decline from 27% in July to 21% in September.

About a third of U.S. holiday food shopping will happen online, continuing a surge in the use of online grocery services since the start of the pandemic, dunnhumby said. Sixty-seven percent of consumers plan to buy their Christmas food in stores, while the remaining third of consumers plan to buy their food online (67%), at restaurants (28%) and at other destinations (17%).

Economic pressures noted by consumers in the last research wave in September have escalated, according to dunnhumby. Fifty-four percent of those polled reported that their finances are in poor shape, up from 49% in September and 45% in March. At the same time, 70% said they think the U.S. economy is weak. As a result, shoppers continue to seek value through lower prices and or promotions, as 42% said they are spending more on food.

The heightened level of worry about COVID-19’s impact, however, hasn’t translated into more action by Americans to fight the virus, dunnhumby’s research showed. Since September, there has been a slight decline in respondents regularly wearing masks and washing hands. Social distancing has risen, with nearly 70% of respondents saying they’re doing so. In addition, 74% of U.S. consumers are very pessimistic about restrictions, up 11 points from September and the fifth-highest measure globally. Along the same lines, just 40% of consumers support the closing of restaurants and bars, down from 69% in March.

Faith in the U.S. government’s ability to deal with coronavirus is at a low of 18% for the study, falling 19 points since the start of the pandemic and joining Japan and Spain as the three lowest worldwide. Trust in stores dropped 10 points since March, with only 47% of U.S. shoppers reporting that stores are doing a good job dealing with the pandemic.

“To best meet consumer needs through the holidays and into the New Year, retailers should focus on offering good value and base prices, with solid, in-store safety measures, fast checkouts, and deliver a positive, personalized online shopping experience,” Steadman added.

For the six waves of the Consumer Pulse Survey, dunnhumby polled more than 42,000 respondents in 21 countries, covering North America (United States, Mexico), Europe (Czech Republic, Denmark, France, Germany, Hungary, Italy, Norway, Poland, Slovakia, Spain, United Kingdom), Asia (Australia, China, South Korea, Malaysia, Thailand) and South America (Brazil, Chile, Colombia). The online interviews were conducted for Wave One from March 29 to April 1, Wave Two from April 11 to 14, Wave Three from May 27 to 31, Wave Four from July 9 to 12 (U.S., Canada and Mexico only), Wave Five from August 28 to Sept. 3, and Wave Six from Nov, 20 to 25. About 400 people were interviewed in each country for each wave of the study, and respondents were approximately 60% female and 40% male.