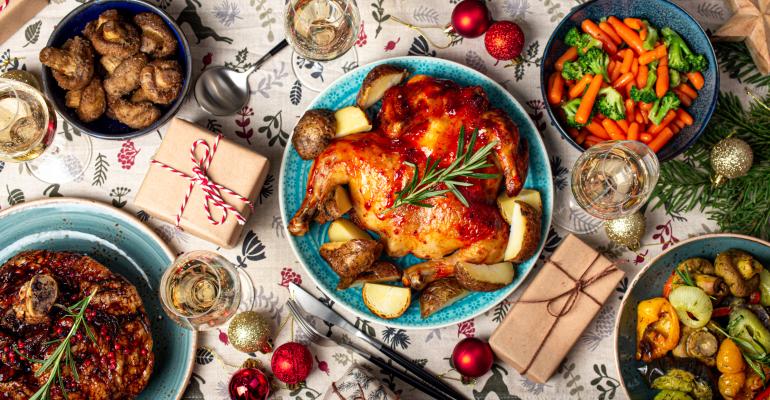 Inflation and convenience both appeared to impact food shopping for Thanksgiving, according to research from 210 Analytics, indicating trends that could carry over to other upcoming holidays.

“Across the holiday’s classics, dollars were up, boosted by inflation, while unit and volume sales were down as shoppers bought less to keep their grocery spending in check,” said Anne-Marie Roerink, principal and founder, 210 Analytics, in a summary of several research reports for November.

Unit sales of holiday meals sold in supermarkets were down 25.3% in November, compared with a year ago, and dollar sales were down 7.5%, according to a report for the International Deli Dairy Bakery Association, citing data from IRI.

IRI research also found that 18.2% of Thanksgiving meals were sourced from foodservice this year, although only 5% of holiday meals were eaten on-premises at restaurants.

“This is a lost opportunity for retail,” said Heather Prach, director of education, IDDBA.

The strong showing for foodservice at Thanksgiving likely contributed to the sales decline of holiday meals in supermarkets, said Jonna Parker, IRI’s team lead for fresh categories, but other factors may also have had an impact.

“We heard many market reports of retailers hitting top capacity early due to the continued lack of deli associates, supply chain challenges in packaging and more,” she said.

Many consumers also appeared to source “hybrid” Thanksgiving meals combining both home-cooked and prepared ingredients. Roerink cited data from IRI showing that only 33.4% of consumers had planned to prepare a Thanksgiving meal completely from scratch, while the remaining two-thirds in integrated ready-to-eat and heat-and-eat options sourced from grocery stores, meal kits or restaurants.

Inflation had a significant impact throughout the store. Although dollar sales were up in many categories, unit volumes were down. Consumers also sought to economize by purchasing smaller turkeys, for example.

There were some bright spots in the deli case, however, as dollar sales of prepared soups and chili were up 19.3% over year-levels, and unit sales rose 7.1%, while dollar sales of side dishes increased 8.8% on a 1.5% increase in units.

“Thanksgiving holiday shopping and consumption patterns provide a glimpse at what the winter holiday season may look like,” Roerink said. “According to the IRI November survey, consumers are split between being excited to have something to celebrate and pulling back on spending given the reduction in purchasing power.”