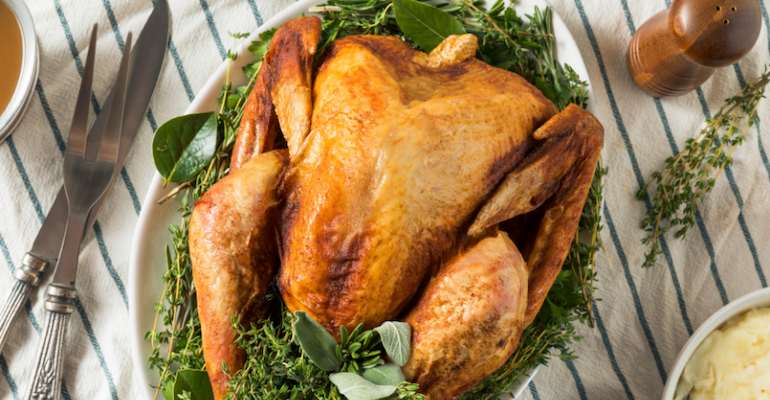 Cost of traditional Thanksgiving dinner at home drops more than $2

Scaled-back Thanksgiving Day plans this year, due to the COVID-19 pandemic, might be assuaged by a drop in the cost of a typical Thanksgiving dinner.

According to the American Farm Bureau Federation (AFBF) 35th annual survey, the average cost of a Thanksgiving feast for 10 people totaled $46.90, down $2.01 from $48.91 in 2019, when the tally was up one cent from the previous year. AFBF noted that the traditional Thanksgiving meal remains an inexpensive holiday celebration, at less than $5 per person.

“The average cost of this year’s Thanksgiving dinner is the lowest since 2010,” John Newton, chief economist at Washington, D.C.-based AFBF, said in a statement. “Pricing whole turkeys as ‘loss leaders’ to entice shoppers and move product is a strategy we’re seeing retailers use that’s increasingly common the closer we get to the holiday.”

AFBF’s Thanksgiving shopping list for the 2020 survey included turkey, stuffing, sweet potatoes, rolls with butter, peas, cranberries, a tray of fresh vegetables, pumpkin pie with whipped cream, coffee and milk — all in quantities to serve a family of 10 with ample leftovers.

To reflect other Thanksgiving meal traditions, AFBF’s price survey also included ham, potatoes and frozen green beans. Added to the classic Thanksgiving menu, these items lifted the overall cost by $13.21 to $60.11. Still, this basket of meal items saw a 4% average price decline versus 2019, with four pounds of ham unchanged at $9.16, five pounds of russet potatoes down 19 cents to $2.55 and a pound of frozen green beans down a penny to $1.50. 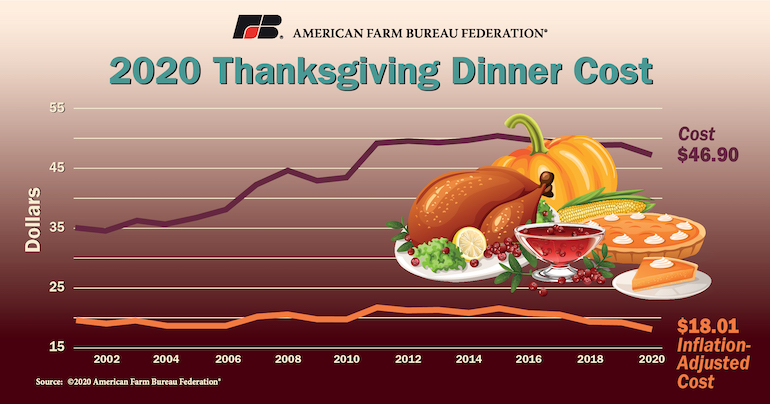 Addressing concerns about potential pandemic-driven out-of-stocks, Newton said, “Turkeys and other staples of the traditional Thanksgiving meal are currently in ample supply at grocery stores in most areas of the country.”

For the 2020 AFBF survey, more than 230 volunteer shoppers checked prices in all 50 states via grocery store apps and websites. The study went online-only this year because of the pandemic, AFBF noted. Participating shoppers sought the best possible prices without using special promotional coupons or purchase deals, AFBF said, adding that its classic survey menu has remained unchanged since 1986 for consistent price comparisons.

Grocery retailers have served up a range of ways to save on this year’s Thanksgiving meal.

“Customers expect unbeatable prices at Aldi, and the holidays are no exception. While nearly every aspect of our lives is rapidly changing, we promise to continue to do everything in our power to keep prices down,” Aldi U.S. President and CEO Jason Hart stated. “We’re proud to provide shoppers everything they need for a traditional Thanksgiving meal from Aldi for less than $30.” 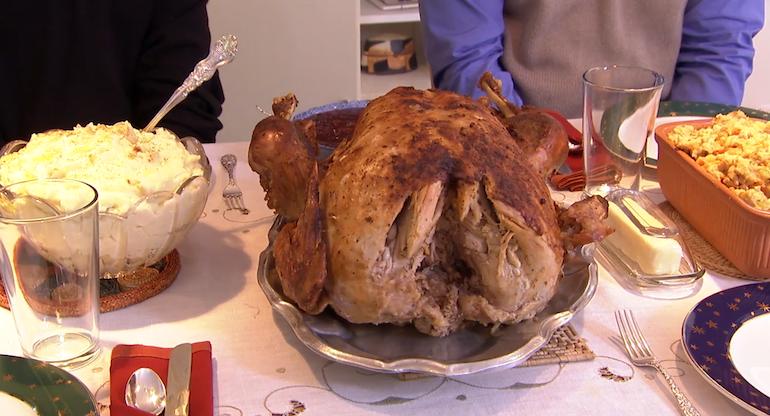 “This year has certainly not been easy, causing numerous disruptions to birthday celebrations, milestone occasions and family gatherings,” commented Lynette Ackley, vice president of fresh for Meijer. “As we head into the holiday season, we wanted to make sure our time-honored Thanksgiving tradition of offering ‘the bird’ at an incredibly low price continued for our customers so they could provide the best holiday meal for their families.”

Meijer added that it expects high sales of its prepared Thanksgiving dinners. The chain offers two options, each at $49.99: a deluxe turkey dinner (10- to 12-pound prebaked Butterball turkey, homestyle stuffing, roasted turkey gravy, mashed potatoes, green bean casserole, cranberry relish and a dozen King’s Hawaiian dinner rolls) and a deluxe ham dinner, which includes the same items as in the turkey meal but with a seven- to nine-pound spiral ham. Both dinners feed eight to 10 people.

Overland Park, Kan.-based Price Chopper has enabled shoppers to use their rewards points for free Thanksgiving meal essentials. The 30 eligible products range from cranberries and potatoes to gravy and dinner rolls. Rewards program also can redeem points for up to $20 off a turkey or a ham.

“We want to make celebrating Thanksgiving as affordable as possible for area families,” Casie Broker, chief marketing officer for Price Chopper, said in a statement. “This year has hit a lot of families’ pocketbooks hard. We know how important it is to make memories around the holidays, so we’re excited to help make that possible.”

According to Nielsen, early holiday shoppers in October paid 3.7% more for popular seasonal items correlated with Thanksgiving than a year ago.

On the consumer side, Nielsen said 70% plan a Thanksgiving gathering with fewer than six people this year, compared with 48% holding celebrations of that size last year.

And in another sign of the coronavirus pandemic’s impact, 47.6% of Americans said they plan to change or bypass their traditional Thanksgiving celebrations, while 48% plan to celebrate Thanksgiving as they did last year.