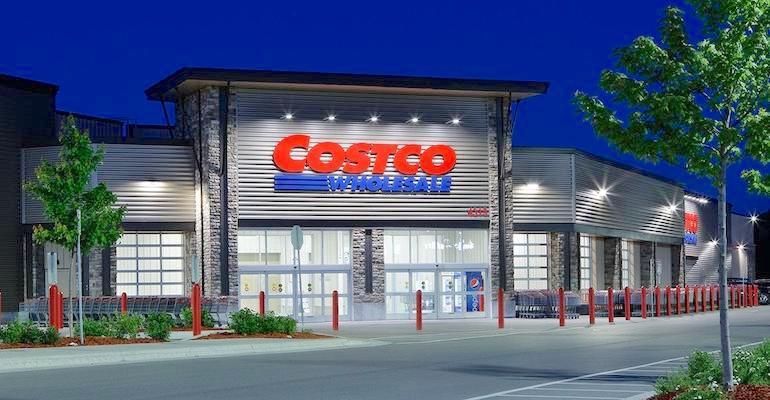 Costco
Costco beat out Loblaw Cos., Sobeys Inc. and Metro Inc. as Canada’s Most Respected Grocery/Food Retailer, based on a survey from Dart Insight and Communications.
Issues & Trends>Consumer Trends

Costco Wholesale edged out Loblaw Cos., Sobeys Inc. and Metro Inc. among consumers as Canada’s Most Respected Grocery/Food Retailer, according to research from Dart Insight and Communications.

Based on a poll of 3,784 Canadians during September, Costco earned a “Respect Score” of 66.9, coming in as the top national retailer over 13 other grocery store banners, Toronto-based c-suite communications firm Dart said Wednesday. Rounding out the top five Most Respected Grocery/Food Retailers in Canada were Your Independent Grocer (with a score of 64.8), Metro (62.3), Real Canadian Superstore (61.5) and Sobeys (61.4). The survey was conducted for Dart by public opinion pollster Maru/Blue. 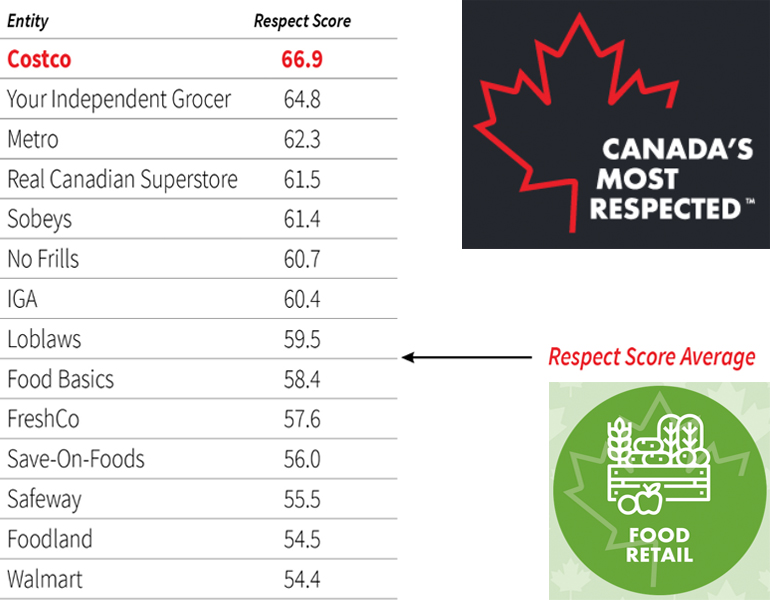 Dart noted that Costco’s No. 1 ranking comes after more than a year-and-a-half of “unprecedented challenges” providing food and groceries to Canadians amid the COVID-19 crisis. The communications firm cited Costco’s broad grocery offerings, which include meat, seafood, packaged groceries, baked goods, pantry items and household essentials, as well as organic, vegan and gluten-free foods.

“The global pandemic thrust these retailers in multiple directions over the past 20 months,” Jeff Munn, executive director of the Canada’s Most Respected Award Program at Dart. “From immediate consumer stockpiling and supply chain disruptions to their valiant frontline essential workers and the pivoting of business/delivery operations for online and delivery services, every single one of these retailers truly deserves our respect. Costco captured the top national rating, which is a wonderful accomplishment.”

The Respect Score is reckoned by consumer responses in Maru/Blue’s questionnaire, which describes respect as “a deep admiration or positive feeling about a combination of someone’s characteristics such as their abilities, qualities, values, actions, and/or achievements.” The definition goes on to say, “Similarly, organizations can achieve respect based on what people perceive or experience about them, like what they make or do, how they treat employees or customers, what they communicate or contribute to society, how much they’re trusted, how their leadership acts, and what’s said about them in the media or even by family and friends.”

Survey participants then are asked to look at the list of retailers and choose “very much,” “somewhat,” “not very much,” “not at all” or “never heard of them” from the responses to rate their level of respect for each company based on what they have “seen, read, heard or personally experienced.” A Respect Score of 0 to 100 is determined from the mean of varying point levels accorded to each response.

Despite an above-average Respect Score, Walmart still garnered the highest percentage of respondents citing “not very much” or “not at all” in terms of respect, at 40.4%. No other retailers on the list reached 30% on this measure, with the next closest companies being Loblaws (29.3%), IGA (26.7%), Safeway (25.2%) and Sobeys (25.0%).

The Loblaws, Your Independent Grocer, Real Canadian Superstore and No Frills banners are part of the Loblaw Cos. retail grocery network. The Most Respected list also includes the Sobeys Inc. food retail banners Sobeys, IGA, Food Basics, FreshCo, Safeway and Foodland, as well as the Metro Inc. banners Metro and Food Basics.