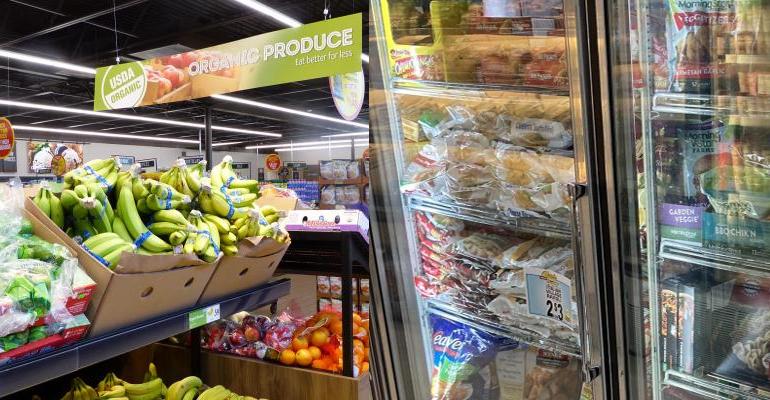 Russell Redman/Michael Browne
Fresh food sales have continued to rise but are being outpaced by frozen foods, which are gaining a greater share of at-home consumption, according to Deloitte’s “Fresh vs. Frozen: The Future of Fresh in a Changing Competitive Landscape” report.
Issues & Trends>Consumer Trends

As eating and shopping habits have changed during the COVID-19 pandemic, U.S. consumers are being pushed and pulled between fresh and frozen foods, a new study from Deloitte reveals.

According to Deloitte’s “Fresh vs. Frozen: The Future of Fresh in a Changing Competitive Landscape” report, released this week, fresh food sales have continued to rise but are being eclipsed by frozen foods, which are gaining a greater share of at-home consumption. New York-based Deloitte’s study is based on a July survey of 2,000 U.S. adults ages 18 to 70 who influenced fresh food purchases in their households.

Fresh food sales climbed over 10% in 2020 to “unexpected new highs” and in the first half of 2021 have well outpaced pre-pandemic sales in 2019, Deloitte said, citing data from IRI and FMI-The Food Industry Association. However, frozen food sales jumped 21% in 2020, and sales of category’s closest equivalents to fresh food — frozen meat, poultry, seafood, fruit and vegetables — rose even more, according to American Frozen Food Institute, FMI and IRI data cited in the report. Frozen sales growth, too, continues to outpace that of fresh so far in 2021. 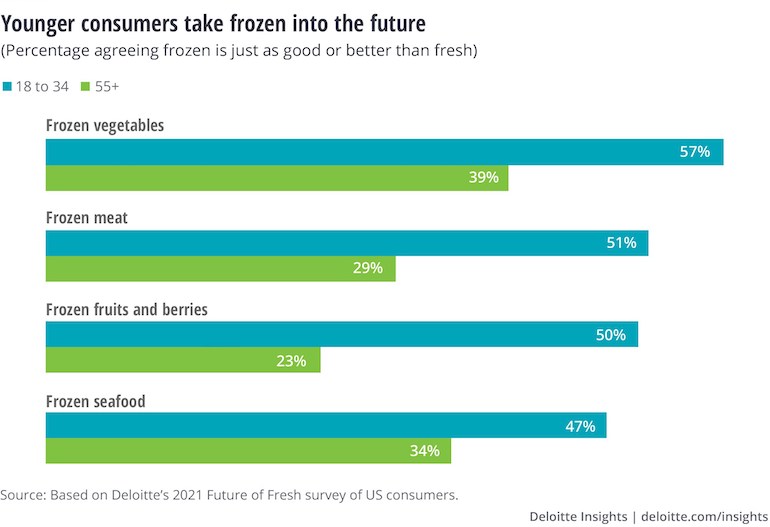 Related: Plant-based foods are here to stay — and grow

Deloitte’s analysis points to three factors influencing the fresh-versus-frozen sales dynamic: perishability, price and preference — all against the backdrop of the pandemic.

Of consumers polled by Deloitte, 60% believe fresh food’s shelf life has declined, for reasons ranging from supply chain issues to just negative impressions. The study noted that with frequent shoppers for fresh food down 8% compared with 2019, fresh purchases are more likely to spoil before the next shopping trip.

Consumers are aware of fresh food’s shelf life both at the store and at home. Deloitte’s research finds that 72% think about the amount food they discard when making a purchase decision, and 45% report that more of the fresh food at home goes to waste than it did in the past. Six in 10 consumers prefer fresh food in packaging, and the same percentage believe the food stays fresh longer when in packaging.

Sustainability as a fresh food purchase driver fell 10% in the survey from 2019 levels.  And when it comes to sustainability, 26% of shoppers believe farmers, ranchers and fisherman carry the most responsibility, compared with only 8% of respondents thinking consumers bear more responsibility. 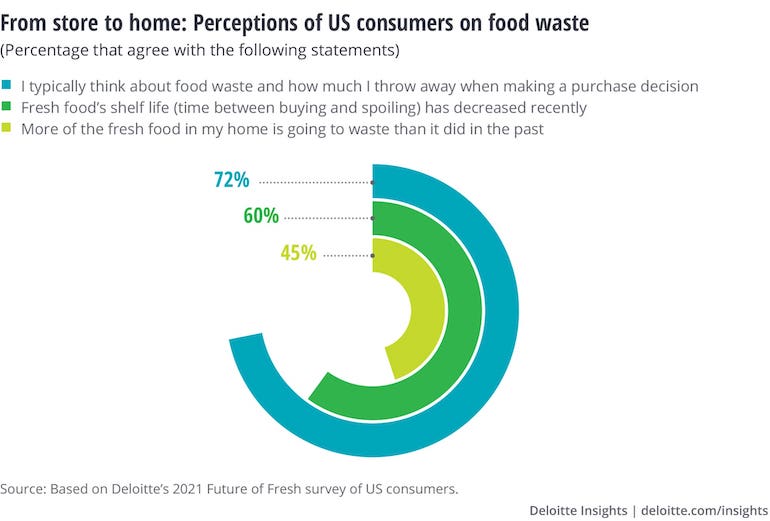 “Fresh food sales are holding up much better than was expected at the beginning of the year,” Barb Renner, vice chairman and U.S. consumer products leader at Deloitte LLP, said in a statement. “But even in times of great success, companies should look out for where competition may come next. The industry needs to work out its supply chain issues and re-energize the fresh experience.”

Pricing, however, trumps perishability as a purchasing factor, Deloitte’s report showed. Among respondents, 90% named price as the top purchase driver for fresh food. And with escalating inflation, the lower prices of frozen food have looked more appealing to many shoppers: 82% of consumers think fresh food prices have risen more than justified.

Frozen food also has gained on fresh as a matter of preference. In head-to-head comparisons, between 40% and 50% of consumers now see frozen food as just as good or better than fresh food.

“Suppliers and retailers should consider leaning into the opportunity in frozen by expanding their product offerings and reimagining the frozen aisle to create excitement and even more growth,” Renner observed. “Nailing e-commerce and the overall omnichannel approach will be critical as well for future success.” 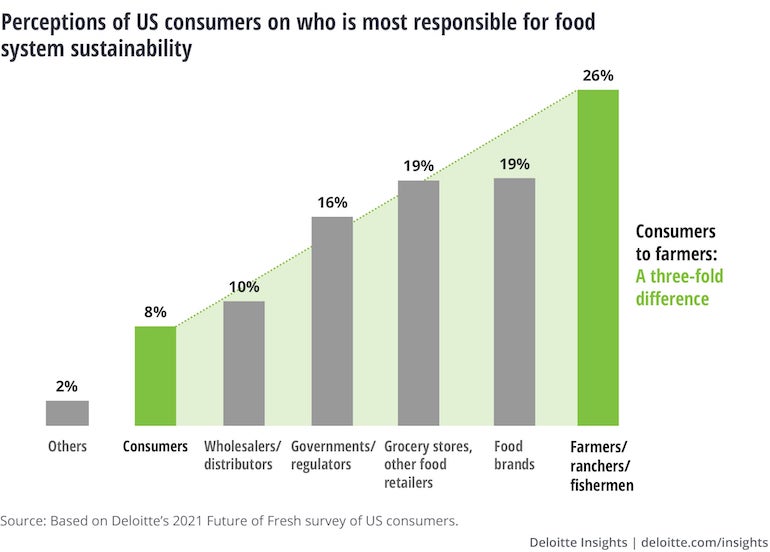 Deloitte further illustrates the fresh/frozen generational divide in its segmentation of “contemporary” versus “conventional” consumers during the pandemic period. Contemporary consumers tend to be younger families, more well-off and urban dwellers and represented 48% of the survey group. Meanwhile, Conventional consumers tend to be older, lower-income and more rural and accounted for 52% of respondents.

Unsurprisingly, safety was again the top driver for purchases this year, Deloitte said, and 71% of Contemporary consumers value the fresh brand, with 78% willing to pay a premium for fresh food.

In both the fresh and frozen aisles, plant-based alternatives (PBAs) are gaining in acceptance and popularity, Deloitte reported. Half of consumers surveyed have purchased a PBA, and overall consumer interest in PBAs has risen 6% since 2020.

Of those who have tried PBAs, 72% think the taste has dramatically improved in recent years and that plant-based milk and meat are just as good or better — 65% and 59%, respectively — than their animal-based counterparts, followed by cheese (54%) and seafood (51%).

Thirty-two percent of respondents indicated they premium for PBAs — and 55% of those who have tried PBAs would do so. Still, Deloitte said, that percentage is much lower than the 70% of consumers willing would pay a premium for fresh food. Other purchase factors for PBAs include perceived benefits for the environment (70%), health (68%) and animal welfare (65%), according to the study.