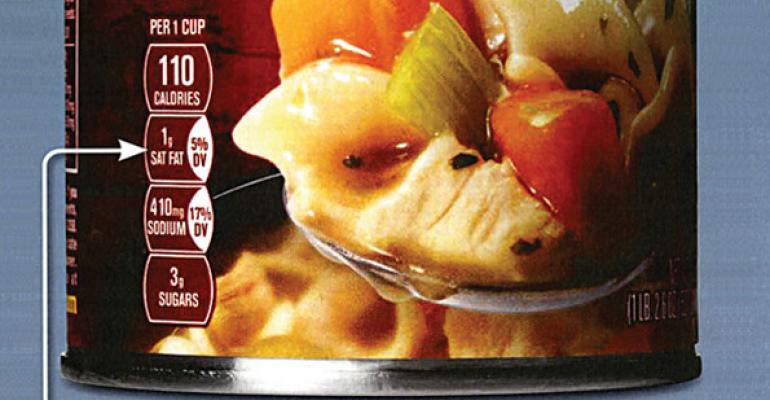 Though the campaign comes less than a week after First Lady Michelle Obama announced changes proposed by the FDA to the Nutrition Facts Panel, the timing of GMA’s campaign is purely coincidental, Mary Sophos, EVP for Policy and Strategic Planning, GMA, told SN.

Facts Up Front is based on the Nutrition Facts Panel, and lists nutrients the Dietary Guidelines for Americans recommend limiting. They include calories and information about saturated fat, sodium and sugar per serving. Additionally, Facts Up Front may include information on one or two nutrients to encourage such as potassium, fiber, protein, vitamin A, vitamin C, vitamin D, calcium and iron.

GMA and FMI’s print and digital campaign includes bilingual ads designed to build understanding of the Facts Up Front label. The ad instructs moderately active adults to strive for 2,000 calories, 2,300 milligrams of sodium and 20 grams of saturated fat per day.

More than 50 retailers, manufacturers and wholesalers have, or are in the process of, voluntarily implementing Facts Up Front. Hy-Vee, Kroger, Safeway, Harris Teeter, CVS and other retailers comprising about 80% of private label SKUs, are rolling out the labels on their store brands, according to GMA.

Last month, a portal geared to retailers with interest in Facts Up Front was launched. It includes free communication tools, tip cards, sample press releases and other materials.

Though updates to the Nutrition Facts Panel are “several years off,” Facts Up Front will jibe with those changes once they are implemented, Sophos said.