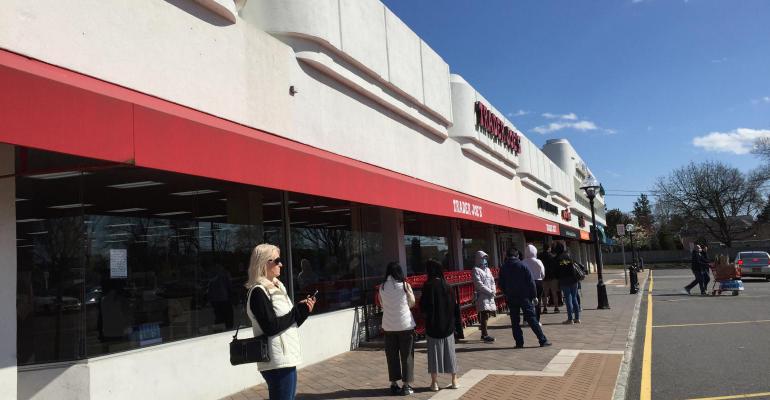 Russell Redman
Customers line up at a Trader Joe's in Plainview, N.Y., as the retailer began limiting the number of shoppers to promote social distancing.
Issues & Trends>Consumer Trends

‘These numbers should come as no surprise,’ NRF’s chief economist says

Grocery and beverage store sales shot up more than 25% in March despite the largest monthly drop ever for overall retail sales, according to the National Retail Federation (NRF).

In advanced estimates, the U.S. Census Bureau said Wednesday that March retail and foodservice sales totaled $483.06 billion (seasonally adjusted), down 8.7% from February and 6.2% year over year. NRF noted that the month-to-month decrease is the biggest ever recorded, topping a 4.3% decline in November 2008 during the Great Recession.

NRF said the Census Bureau believes the reliability of its data hadn’t changed “substantially,” although many retailers whose businesses were closed due to the coronavirus pandemic weren’t available to reply to the monthly sales survey. Still, the bureau acknowledged that retailers’ “ability to provide accurate, timely information to Census may be limited,” NRF added.

“COVID-19 has hit the retail industry unevenly,” NRF Chief Economist Jack Kleinhenz said in a statement. “This is a market of haves and have-nots. The haves are the stores that remain open with lines out the doors to buy daily necessities, while the have-nots are the stores that have closed and are taking the brunt of the impact of the pandemic. These numbers should come as no surprise, given the mandated shutdown of our economy to slow the spread of the virus.”

NRF pegged March retail sales as up 1.7% seasonally adjusted from February and rising 4.5% unadjusted year over year. The federation said its calculation of retail sales excludes automobile dealers, fuel stations and restaurants in order to focus on core retail, which explains the difference between its figures and Census Bureau data.

Retail categories excluded in NRF’s estimates saw some of the biggest hits in March. NRF said that, besides restaurants and bars being closed, gas sales were impacted by fewer people driving and lower fuel prices, while auto dealers were among those affected by stay-at-home orders. 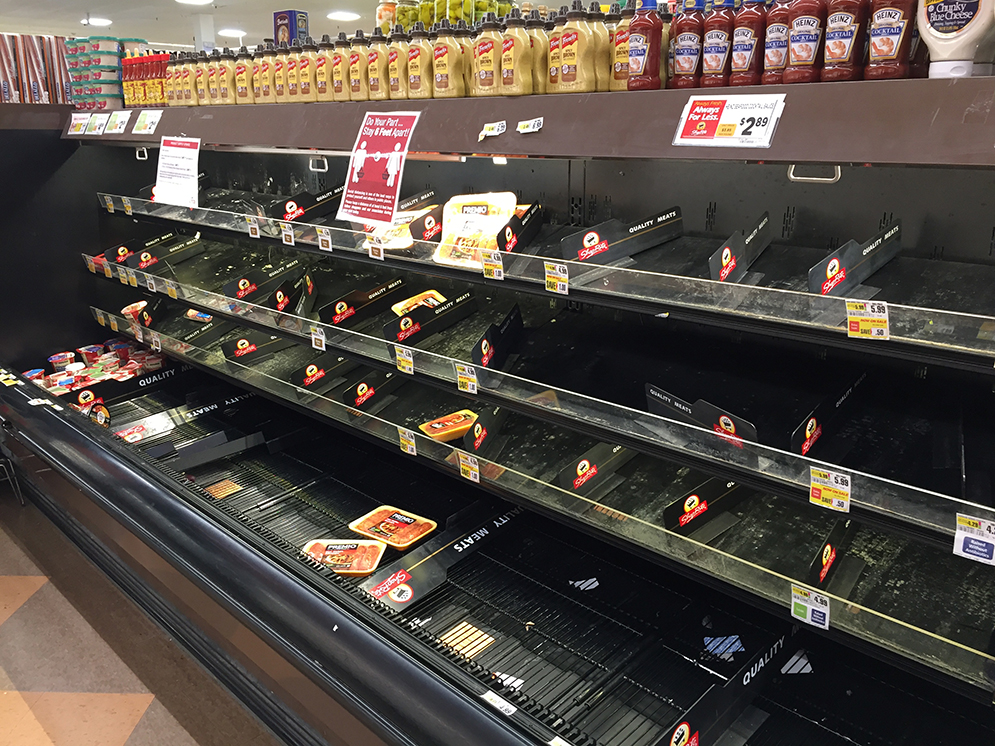 Early on in the coronavirus outbreak, shoppers emptied shelves of key products, as seen in this depleted meat section at a ShopRite store in Bethpage, N.Y.

The March NRF numbers follow an 0.2% month-to-month decline in February as the coronavirus began to have its first effects, NRF said. February sales rose 7.4% year over year, but the federation noted that the increase was “artificially high” because of low sales after the government shutdown in early 2019. The three-month moving average as of March shows an uptick of 5.1%.

“March was a month that started out with many stores still open, but far more are closed now,” Kleinhenz said.

For the January to March 2020 period, grocery store sales (adjusted) rose by 8.9% from the previous three-month period and by 11.6% from the year-ago period.

General merchandise stores — which include warehouse clubs that sell food and essential household products — edged up 6.4%, while health and personal care stores, which include pharmacies, advanced 4.3%, NRF noted.

Also last week, Ahold Delhaize said it estimates March U.S. comp sales growth at 34% versus a year ago. And at the start of April, The Kroger Co. reported a 30% upswing in identical-store sales for March.

NRF said the sales surge at grocery stores and other retailers considered “essential” helped offset some of the decline in March.

Clothing stores saw the largest decrease among categories counted by both NRF and the Census Bureau, with March sales plunging 50.5% (adjusted) from February. Furniture store sales sank 26.8% month to month, while sporting goods stores saw a 23.3% sales drop. Similarly, sales at electronics and appliance stores during March fell 15.1% from February.

With more people turning to e-commerce as they shelter in place, online and other non-store sales grew 3.1% month-to-month for March, NRF pointed out. Likewise, with many Americans looking to keep busy as they’re stuck at home, sales at building materials and garden supply stores in March inched up 1.3% from February.

“Don’t be surprised if the data going forward shows a worsening situation,” Kleinhenz added. “Even if the economy begins to reopen in May, consumer behavior may take a long time to adjust. The road to recovery could be long and slow.”