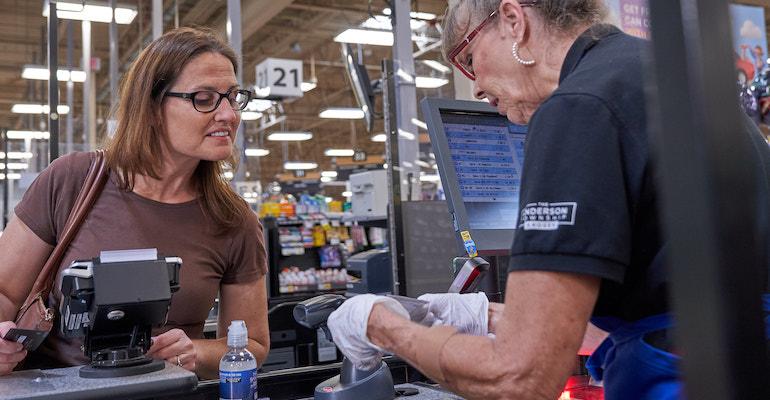 The Kroger Co.
With prices remaining elevated at the grocery store, more customers are making quick trips versus stock-up trips as they hunt for bargains.
Issues & Trends>Consumer Trends

For the second straight month, a relaxation in the Consumer Price Index (CPI) didn’t lead to much of an ease-up in food prices.

The August CPI for All Urban Consumers inched up 0.1% (seasonally adjusted) from July, when inflation remained flat overall on a month-to-month basis, the U.S. Bureau of Labor Statistics (BLS) reported Tuesday. Still, the level in August signaled extended relief for consumers in the wake of monthly gains of 1.3% in June, 1% in May, 0.3% in April, 1.2% in March, 0.8% in February and 0.6% in January, BLS reported Wednesday. 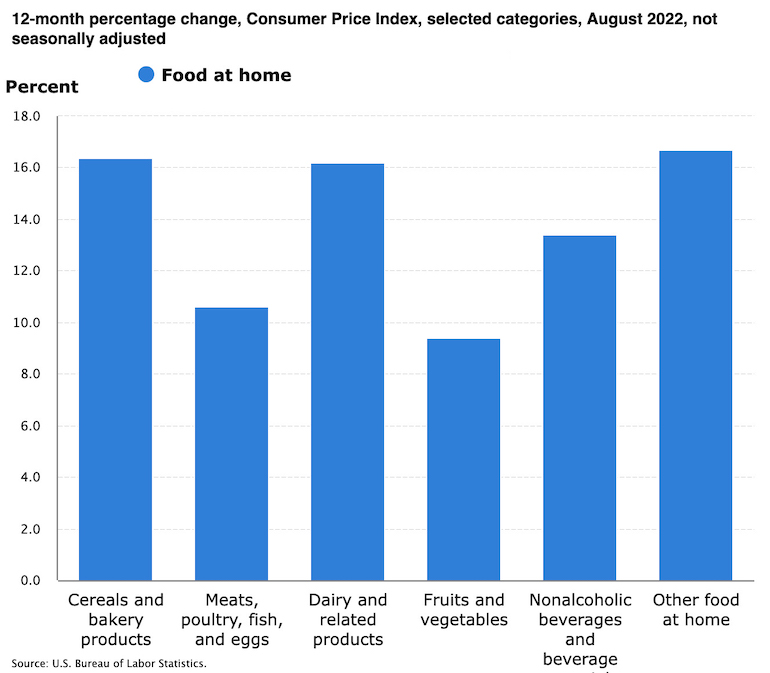 All six major grocery store food group indices rose for August, but not as much as in the previous month, according to BLS. The cereals and bakery products index saw the largest monthly increase at 1.2%, while the index for other food-at-home advanced 1.1%. Rising 0.5% in August were the indices for meat, poultry, fish and eggs; fruit and vegetables; and nonalcoholic beverages. Of note, the dairy and related products CPI inched up 0.3% month over month, which BLS said was the smallest increase in that index since November 2021.

The steepest 12-month price hikes for August came from other food at home (+16.7%), cereals and bakery products (+16.4%), and dairy and related products (16.2%). Of the remaining major grocery store food groups, year-over-year increases were 13.4% for nonalcoholic beverages; 10.6% for meat, poultry, fish and eggs; and 9.4% for fruit and vegetables.

BLS reported that the food-away-from-home index was up 0.9% month to month and 8% year over year, rising from respective monthly and 12-month increases of 0.7% and 7.6% in June.

Excluding food and energy, the August CPI rose by 6.3% from a year earlier and by 0.6% from a month ago, a gain from upticks of 5.9% year over year and 0.3% month to month in July, according to BLS.

Energy costs, still the chief driver of elevated inflation rates, continued to relax in August, up 23.8% year over year but down 5% month over month, compared with an annual increase of 32.9% and a monthly decrease of 4.6% in July. Gas and fuel oil prices were up 25.6% and 68.8%, respectively, for the 12 months through August versus respective hikes of 44% and 75.6% in July. Month over month, prices dropped by 10.6% for gas and by 5.9% for fuel oil in August.

Though the CPI declined in August, elevated prices for groceries and other consumer goods have shoppers wary, CPG market researcher IRI noted. Food-at-home prices rose 1.6% from the end of July to the end of August and were up 13.4% year over year through the week ended Aug. 28, according to Chicago-based IRI’s August 2022 Price Check: Tracking Retail Food and Beverage Inflation report.

“We are beginning to see consumers scale back purchases both in terms of units and volume in recent weeks, as retail food and beverage prices have continued to rise,” Krishnakumar (KK) Davey, president of thought leadership for CPG and retail at IRI and sister research firm NPD. “While retail food and beverage sales had been fairly resilient, we’re seeing signs of consumer stress, particularly among low-income households.”

Recent price moderation in other parts of the economy, such as gasoline, haven’t trickled through to help pull down high year-over-year food and beverage inflation, IRI said. For example, carbonated beverages and common fresh fruit categories saw the largest monthly price jumps in August, each up 5.3% from July, while butter/margarine/spreads represents the most inflated category, with prices up 30% from a year ago.

Similarly, even though prices in the coffee category edged up less than 0.3% month over month at the end of July, they remain over 18.6% higher year over year, according to IRI, which added that this is the case in most CPG categories 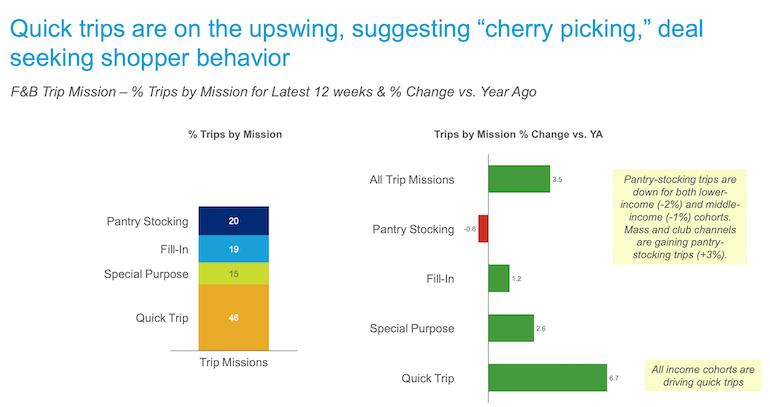 Low-income households are driving the change. Low-income shoppers, who drove most of food and beverage growth in 2021, are pulling back on food purchases as inflation increases.

Volume and unit sales of certain discretionary categories — such as frozen seafood, candy and snack bars/granola bars/clusters — have slowed significantly more in stores serving low-income households versus the overall market, IRI said, explaining that low-income customers are making trade-offs to feed their families amid high pricing. Nevertheless, shoppers have continued to trade up by driving volume share to premium brands in selected categories, including snack nuts and seeds, canned and bottled fruit, frozen entrées, fresh eggs and butter, the researcher noted.

“Consumers are buying less in discretionary food and beverage categories and are shopping more frequently in search of better prices,” Davey commented. “At the same time, consumers are willing to pay a premium for some categories — such as pasta, pasta sauce, butter and frozen entrées — which are considered affordable indulgences for more cash-strapped shoppers.”