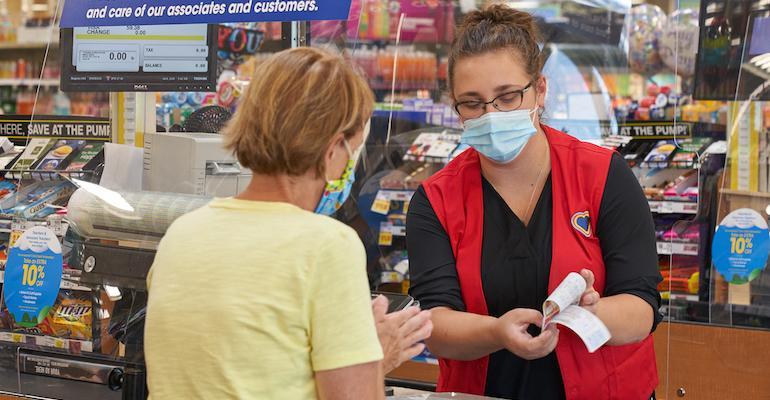 Kroger
Since May 2020, more than four in 10 U.S. consumers think food prices have increased, with 45% believing prices were up in the February dunnhumby survey.
Issues & Trends>Consumer Trends

U.S. consumers are feeling more confident as the nation starts to climb out of the COVID-19 pandemic, but elevated food pricing has grocery shoppers opting for value, the latest dunnhumby Consumer Pulse Survey finds.

Worry about coronavirus has sunk to its lowest level since the crisis began, according to the dunnhumby Worry Index. Through February, 23% of Americans said they were worried about the pandemic, down from a peak of 32% last November and 31% in March 2020, when the COVID-19 was declared a national emergency. The index measures “worry” as extreme concern about the virus and not feeling safe when shopping.

Related: Grocery visits are down year over year — but looks are deceiving

Sixty-five percent of Americans report still wearing face masks, and 61% are practicing social distancing, about the same levels as last fall but well below the early months of the pandemic.

Meanwhile, 58% of U.S. consumers think the national economy is weak, down sharply from March 2020, when 75% thought so. Likewise, 39% of consumers deem their finances as poor, a 15% drop from 54% in November, when the country was in the grips of the pandemic’s third wave, dunnhumby noted. 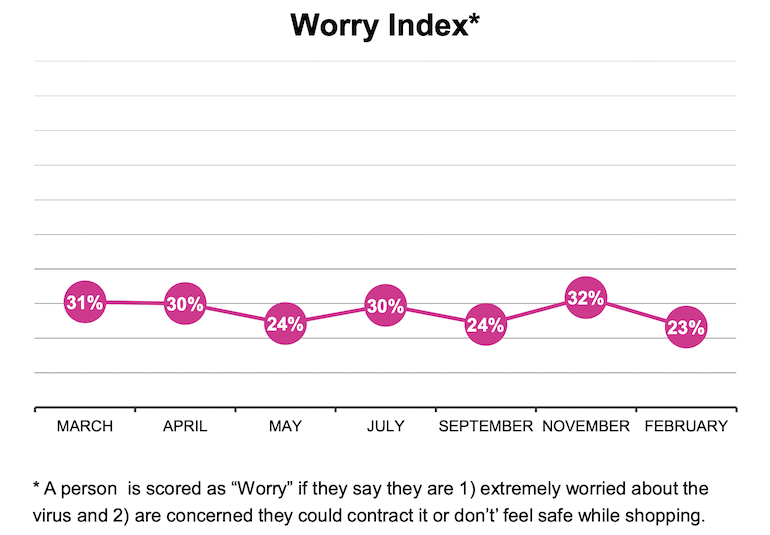 For the Consumer Pulse study, dunnhumby has polled more than 48,000 consumers in 22 countries in seven waves since March 29, 2020. The global customer data science company said online interviews for the latest wave were conducted Feb. 18 to 24, and each national survey included about 400 respondents.

“While this wave marks the first time since the pandemic struck that consumers are feeling better financially, we are also seeing value-seeking driving shopping behavior,” according to Grant Steadman, president of dunnhumby’s Chicago-based North America unit. “It’s noteworthy that consumers are now prioritizing value instead of speed, which was their key driver for much of 2020.”

Indeed, Americans are closely watching their food expenditures. Dunnhumby found that 43% of U.S. consumers think they’re spending more on food, with 18% saying they’re spending a lot more and 25% a little more. That’s about the same level as last fall but down from last spring and summer, when around 50% of Americans believed their food spending was up.

Much of the sentiment on higher spending stems from pricing. Since May, more than four in 10 U.S. consumers think food prices have increased, with 45% believing prices were up in the February survey, compared with 43% in November. Thirty-three percent said in the latest poll they’re spending about the same on food, while 24% reported spending less. 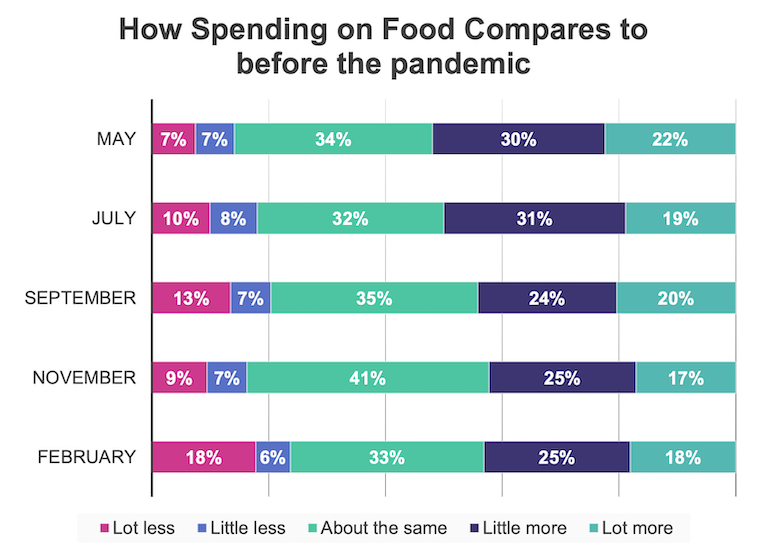 Cost concerns have led to a shift in grocery shopping behavior, dunnhumby noted.

Of U.S. consumers polled, 80% are taking at least one action to seek value, led by shopping at stores with everyday low prices (52%).

Other actions include buying some brands only when on sale (36%), stocking up on products on sale or promotion (36%), searching online to find the best sales (34%), searching online for coupons (34%), and buying private brands when available (33%). Also, 29% are purchasing large pack sizes when available, 26% are buying the brand with the lowest prices, 21% are using a lot of coupons and 18% are comparing prices at different stores before deciding where to shop. 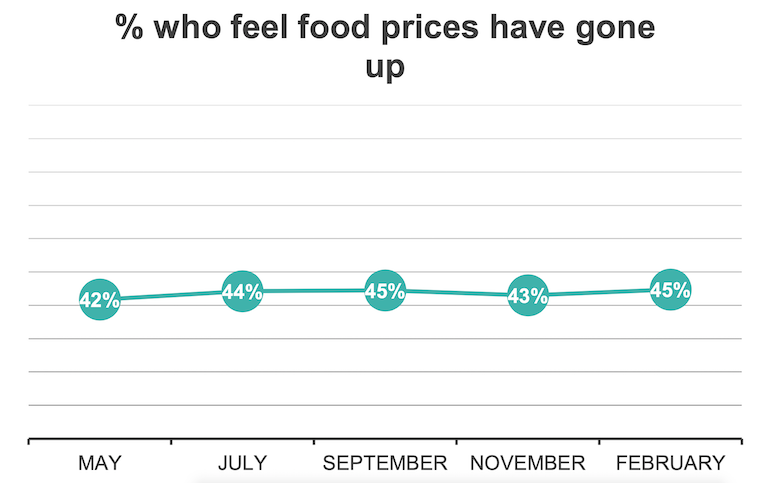 Dunnhumby said value-seeking consumers represent about 70% of the U.S. shopper base versus just 13% for quality-seeking consumers, who mainly shop at high-quality stores and are willing to pay more for higher quality. Half of quality seekers are employing one of the following tactics: shopping at stores with the best quality (38%), paying more to get better quality (19%), buying more expensive items (8%) and not paying attention to prices (7%).

When it comes to choosing retailers, Walmart leads the field for value shoppers. Thirty-three percent of U.S. survey respondents think Walmart provides the best value for the money, followed by Kroger (10%), Aldi (10%) and Amazon (6%).

With improving economic confidence and dissipating concern about COVID-19, consumer habits triggered by the pandemic look to be reversing, dunnhumby’s research shows.

The number of shopping trips has jumped, with Americans reporting 6.4 trips in the past week for the February survey, compared 4.6 in November. Supermarkets remain the top destination, with 68% of consumers shopping at grocery stores within the past week, followed by convenience stores (28%), discounts and club/hypermarket stores (20% each) and drugstores (15%). Supermarkets were the only stores to show a gain since November, up from 67%. 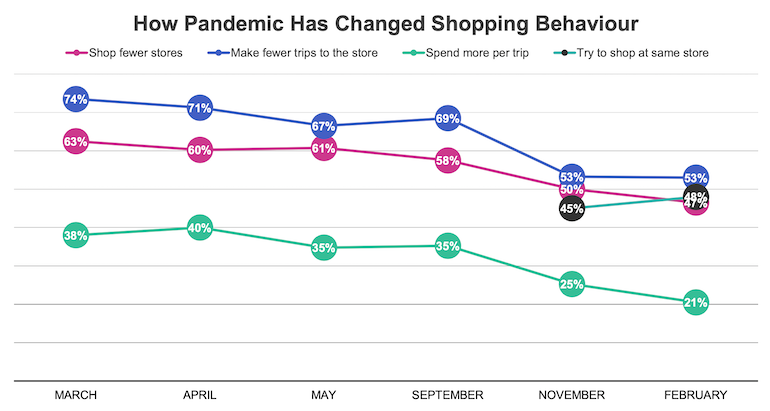 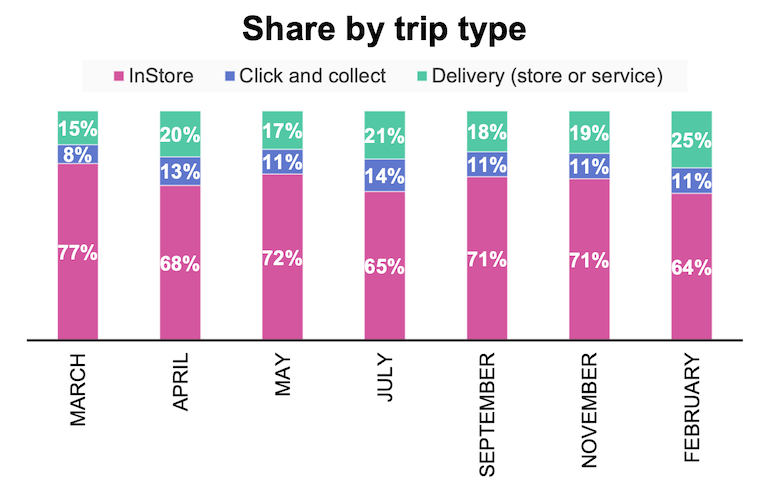 Online trip count also is on the rise. At the end of February, online trips accounted for 3.6 of weekly food shopping trips, compared with 2.5 in September and 1.3 in March 2020.

Americans also think the pandemic is being handled better. In February, 50% of respondents believe stores are doing a good job dealing with COVID-19 (vs. 47% in November), compared with 32% for pharmacies (28% in November) and 25% for government (18% in November), dunnhumby found. Among retailers, 34% of U.S. consumers cited Walmart as “doing a particularly good job” managing the coronavirus crisis, versus 15% for Walgreens, 14% for CVS and 11% for Kroger.