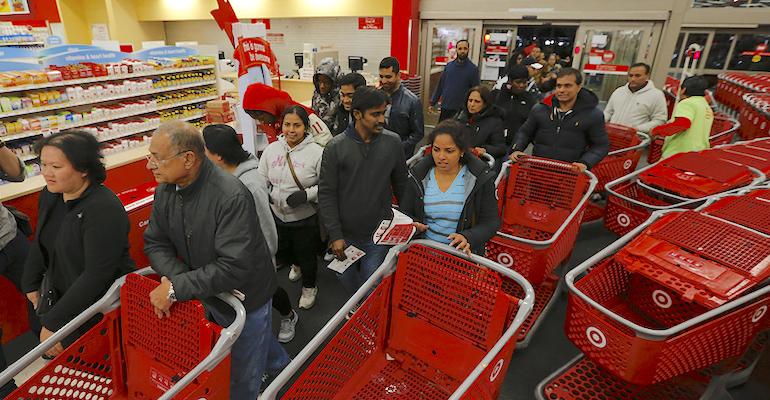 With the holiday season fast approaching, more than half of consumers express some concern about shortages, pricing and COVID-19 when food shopping, new research from FMI-The Food Industry Association shows.

Of 1,601 U.S. adults polled in early October, 58% are worried about foods they want for the holidays being out of stock, with 31% somewhat concerned, 12% very concerned and 14% extremely concerned, according to FMI/The Hartman Group’s U.S. Grocery Shopper Holiday Trends Tracker report, released this week. Their holiday food backup plans include preparing something different than they have in the past (cited by 47%), looking for new recipes (32%), buying prepared food from a store (22%) and purchasing something from a restaurant (18%).

When grocery shopping in general, 43% of consumers surveyed reported concern about items they need not being in stock, up from around 40% in August and approximately 35% in February. Shoppers expressed more concern about food pricing. Fifty-three percent said prices are rising on the foods they prefer, about the same percentage as in August but up from roughly 45% in February. Twenty-eight percent aren’t sure they’ll have enough money for the food they need, about the same level as at the start of the pandemic in March 2020.

Grocery customers’ concern about COVID have gradually declined but remain at a significant level, FMI’s study revealed. Sixty-two percent of respondents cited at least one concern about becoming infected with COVID or spreading it to others when food shopping, including getting ill from other customers (42%), catching the virus by touching shopping carts (31%), getting ill from store employees (30%), becoming sick from touching surfaces in stores (29%) and spreading the virus to others (24%).

Still, overall anxieties about COVID have eased, and most consumers feel comfortable about shopping at grocery stores, FMI noted. Sixty percent of those surveyed agreed it’s “acceptably safe” to shop in person at supermarkets and food stores, and 80% consider it safe to pick up online grocery orders at the store.

Not all COVID concerns have been erased among food shoppers, however. FMI found that 52% are worried about the potential emergence of virus variants (25% very concerned, 27% extremely concerned). Also, about a third of consumers polled admit to some anxiety about shopping in grocery stores with no face mask or vaccination requirements for employees (36%) or customers (34%).

“Consumers remain aware of pandemic impacts on the supply chain, but most are confident that with some planning they will find their favorite foods at reasonable prices and share traditional menu with loved ones this holiday season,” FMI President and CEO Leslie Sarasin said in a statement. “Both grocers and consumers have demonstrated tremendous resilience over the last year, and shoppers are excited about a cautious return to normalcy for their holiday gatherings this year.”

Indeed, 38% of consumers think food shopping already has returned to normal since the onset of the pandemic, and 8% expect the situation to stabilize by the end of 2021. Another 13% believe food shopping was never disrupted by the pandemic; conversely, 42% don’t expect grocery shopping to get back to normal until sometime in 2022 or thereafter. 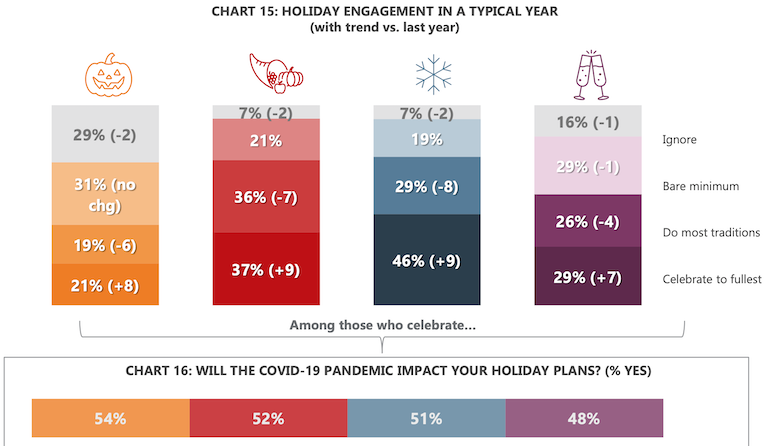 Clearly, holiday enthusiasm is up this year, the FMI/Hartman research showed. Among respondents, 37% plan to celebrate Thanksgiving to the fullest, up 9% from a year ago. That compares with 46% celebrating to the fullest for the Christmas/winter holidays (+9%) and 29% doing so for New Year’s (+7%).

FMI noted that grocery spending remains elevated, with the average weekly spend per household at $144 as of early October, about the same as $146 a year earlier but down from the peak of $161 in March 2020.

Grocery customers, too, have continued the online shopping habits spurred by the pandemic. FMI’s report said 61% do their grocery shopping online at least occasionally, up from around 53% in late spring and 49% in March 2020. Fourteen percent of those surveyed report shopping online “almost every time” for their groceries, double the percentage that did so at the pandemic’s onset.

And through early October, online purchases accounted for 22% of shoppers’ weekly grocery spend, up from 21% in February, 15% in February 2020 and 11% in 2019. Mass merchants have been the main e-commerce beneficiary in grocery, with 40% of consumers saying they shop online at those retailers, versus 25% for supermarkets and 26% for club retailers.